Six-time Kentucky Derby-winning trainer Bob Baffert indicated via text that Hozier, sixth in the Arkansas Derby (GI) in his most recent start, is under consideration for Kentucky Derby 147.

Owned by the partnership of SF Racing, Starlight Racing, Madaket Stables, Stonestreet Stables, Golconda Stables, Siena Farm and Robert Masterson, Hozier is No. 21 on the Road to the Kentucky Leaderboard.

Hozier galloped a little bit more than a mile with Joel Osorio up over a sloppy track a little before 9:30 on a morning in which the news of the day was … wait for it … Snow!

Overnight Louisville picked up an April 21 record 1.8 inches of snow that left the Matt Winn Turf Course covered in a blanket of white inside the sloppy main track.

“We cut back a little bit today and sent them straight off (as opposed to backtracking to the front of the grandstand),” Pletcher said, “And got them back safe and sound.”

First to go out for Pletcher at 7:30 was Florida Derby (GI) winner Known Agenda with Hector Ramos aboard and Wood Memorial (GII) runner-up Dynamic One with Carlos Perez Quevedo aboard.

At 7:50, Wood Memorial winner Bourbonic was on the track with Ramos aboard along with Jeff Ruby Steaks (GIII) runner-up Sainthood with Amelia Green aboard.

Pletcher is leaning toward working all four on Friday.

“There is potential for rain all day Saturday and I would prefer Friday to pushing back to Monday,” Pletcher said.

Pletcher, who won the Derby in 2010 with Super Saver and 2017 with Always Dreaming, has riders lined up for all but Sainthood.

“We will wait until after the final breezes and monitor who is available,” Pletcher said.

Helium, ridden by Paolo Levi and Soup and Sandwich, with Gilbert Hernandez in the saddle, were both accompanied by stable pony Jack with Isabella Leslie aboard.

Both horses are likely to gallop Thursday, according to trainer Mark Casse’s assistant David Carroll.

HIGHLY MOTIVATED – Klaravich Stables’ Highly Motivated galloped a mile and a half under Peter Roman during the 7:30-7:45 training window for Derby and Kentucky Oaks horses.

Trainer Chad Brown plans to work the Blue Grass Stakes (GII) runner-up Saturday, a breeze that could be moved up a day because of weather.

HOZIER – Hozier, No. 21 on the Road to the Kentucky Derby leaderboard, galloped a little more than a mile before 9:30 under exercise rider Joel Osorio.

KEEPMEINMIND – Keepmeinmind had a spirited 1 ½-mile gallop over the sloppy track with Enrique Benitez aboard at 5:45.

Standing at No. 23 on the Road to the Kentucky Derby leaderboard, Keepmeinmind is scheduled to work Friday or Saturday for trainer Robertino Diodoro.

Trained by Kenny McPeek, King Fury stands at No. 22 on the Road to the Kentucky Derby leaderboard with a work scheduled for Saturday.

The Orb colt jogged one mile under rider Margarito Fierro.

“Horses like this give me the motivation to keep going in life,” said Fierro, who’s worked for Foley for nearly 20 years. “He’s still a baby but what I’ve loved about his galloping is he does it with class. He gets on the track with the pony, checks out his surroundings and when he’s ready to start his gallop he’s all business.”

“We’re still waiting to see what shakes down,” trainer Dallas Stewart said. “He looks unbelievable out there training but you never know what can happen with the horses in front of us. We’ll be ready.”

Starrininmydreams sits No. 24 on the Road to the Kentucky Derby leaderboard.

LONGINES KENTUCKY OAKS UPDATE – OXO Equine’s Travel Column, winner of the Fair Grounds Oaks (GII) in her most recent start, paid a visit to the starting gate before galloping 1 5/8 miles on a chilly and damp Wednesday morning.

Ava’s Grace is scheduled to work Friday or Saturday.

COACH, TRAVEL COLUMN – Fair Grounds Oaks (GII) winner Travel Column had an adjusted position on trainer Brad Cox’s set list Wednesday when she galloped about 1 5/8 miles and visited the starting gate, which opened at 7:30 a.m. Typically, the gray filly would train before 6 a.m.

Both fillies are scheduled to work Friday, according to Cox.

Competitive Speed is scheduled to work Friday after which Gonzalez will finalize the process of naming a rider for the Oaks.

“We will wait until after the breeze and see who is available,” the 55-year-old Gonzalez said.

CRAZY BEAUTIFUL – Phoenix Thoroughbred’s Crazy Beautiful galloped a mile and a half under Danny Ramsey at 7:30 for trainer Kenny McPeek.

Winner of the Gulfstream Park Oaks (GII) in her most recent start, Crazy Beautiful is scheduled to work Saturday.

Malathaat is scheduled to work Friday.

MILLEFEUILLE – Juddmonte Farms’ Millefeuille galloped a mile and a quarter at 7:30 under Ailsa Morrison for trainer Bill Mott.

“I’ve known him since we were 5-years-old and we lived across the street from one another in New Orleans,” Stewart said. “He’s a great hand on a horse.”

Will’s Secret is slated to work Friday, according to Stewart.

The Kentucky Derby Newsfeed is now available via FTP download. Files are 1080 HD and will be uploaded on a daily basis

You will receive a prompt to enter a username and password. 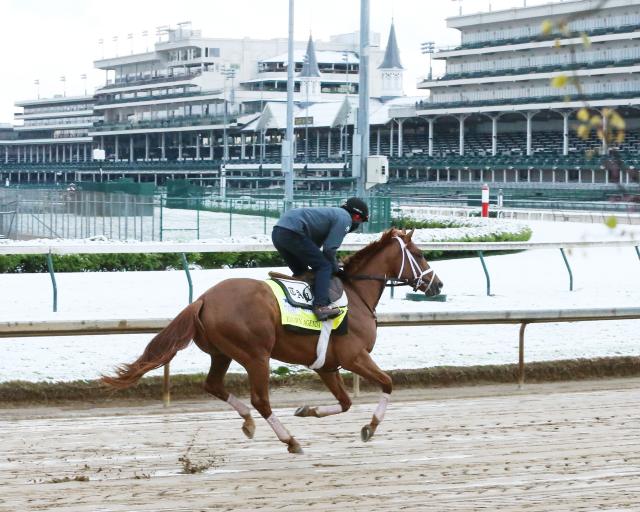