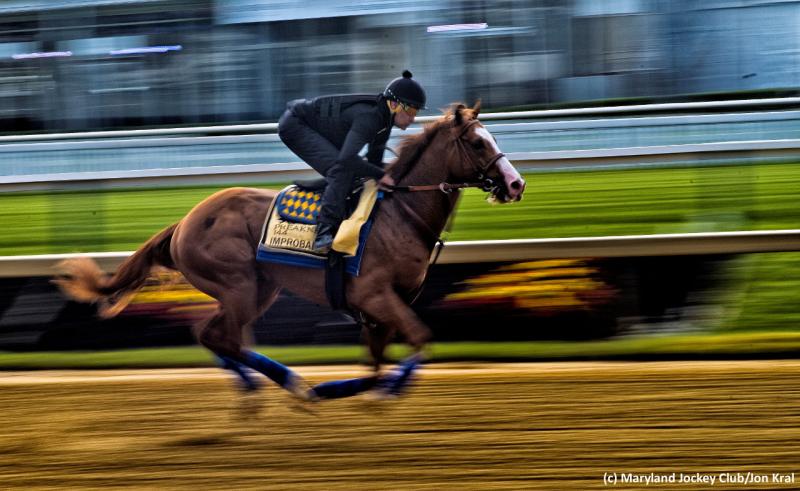 A perennial Preakness (G1) storyline – newcomers to the Triple Crown scene test their mettle against the proven competitors coming out of the Kentucky Derby (G1) – takes on heightened relevance this year. That’s mainly because the first four horses across the wire in the Derby are all missing from Saturday’s renewal of the Middle Jewel. At the same time, the “new shooters” are arguably better than in a typical Preakness, making for a fascinating handicapping puzzle.

With the Derby winner via disqualification, Country House, ruled out by a cough, and the first-past-the-post, Maximum Security, getting a freshening, any chance of a quick rematch at Pimlico was scuttled. Code of Honor, elevated to second, is likewise on a holiday, while Tacitus, the promoted third, is headed straight to the Belmont (G1). Not since 1951 have so many Derby principals been absent from Pimlico.

Thus the chief representatives of the Derby form here are beaten favorite Improbable, the official fourth-place finisher, and War of Will, who was hampered on the far turn when Maximum Security veered out. Bodexpress, also shuffled back in the chain reaction, and Win Win Win round out the quartet of Derby veterans looking for better luck in the Preakness.

The remaining nine entrants – more than two-thirds of the field – are all new shooters, including such major contenders as Bourbon War, Alwaysmining, Owendale, and Anothertwistafate.

Check out the free Preakness PPs courtesy of Brisnet

Improbable once again ranks as the favorite, installed as the 5-2 choice on the morning line after drawing post 4 in the 13-horse field. The flashy chestnut shares connections with last year’s Triple Crown hero Justify. Campaigned by WinStar Farm, China Horse Club, and Starlight Racing, Improbable is trained by Hall of Famer Bob Baffert, and now for the first time, teams up with Hall of Fame rider Mike Smith.

After an unbeaten juvenile campaign capped by a romp in the Los Alamitos Futurity (G1), Improbable entered 2019 as a leading player on the Derby trail. But he’s dropped all three starts this season, albeit with extenuating circumstances. Run down late in his reappearance in the first Rebel (G2) division, Improbable did not cope well with the addition of blinkers in the Arkansas Derby (G1), where he finished a close second to Omaha Beach. Improbable took the blinkers off for the Kentucky Derby, and inherited favoritism after Omaha Beach’s scratch, but didn’t threaten when crossing the wire fifth.

A different trip on a fast track could make all the difference for Improbable, who hopes to make Preakness history for Baffert. Currently tied with 19th century horseman Robert Wyndham Walden’s record of seven wins, Baffert would become the all-time leading Preakness trainer if he wins number eight.

War of Will, who drew the rail in the Derby, will break from post 1 again at Pimlico. While that’s not what trainer Mark Casse wanted, it’s prompting an arguably advantageous change in tactics. Instead of sending him forward to get position, as he was forced to do from that spot at Churchill Downs, Casse has said that jockey Tyler Gaffalione is likelier to try to ease off the pace in hopes of having him relax better. His headstrong tendencies in the Derby didn’t help his cause, and after shrugging off the interference by Maximum Security, he faded in deep stretch. If War of Will doesn’t pull early, the Risen Star (G2) and Lecomte (G3) hero could pack a stronger late punch.

Win Win Win was another unable to do himself justice at Churchill, winding up officially ninth. He now adds blinkers for trainer Mike Trombetta, whose only prior Derby runner, Sweetnorthernsaint (2006), bounced back to run second in the Preakness. Win Win Win has the credentials to factor, as the track record-setting winner of the Pasco at Tampa Bay Downs with placings in both the Tampa Bay Derby (G2) and Blue Grass (G2). The Florida-bred also has a pedigree angle as the grandson of Derby/Preakness heroes Sunday Silence and Smarty Jones. Win Win Win is drawn widest of all in post 13, so he could either drop back, or if the blinkers sharpen him up, he could take up a more forward position with Julian Pimentel.

The maiden Bodexpress has the weight of history against him, since you have to go back to the 1888 winner, Refund, to find the last horse to break his maiden in the Preakness. Yet the Gustavo Delgado pupil was previously second to Maximum Security in the Florida Derby (G1), sire Bodemeister just missed in the 2012 Preakness, and Bodexpress gets an eye-catching jockey change to Hall of Famer John Velazquez.

With four also-rans flying the Derby flag, the historical stats in favor of Derby runners in the Preakness might not apply this year. Handicappers are liable to turn to the new shooters for betting value.

Bourbon War comes out of that key Florida Derby, rallying for fourth in a race dominated by the front runners. The son of Tapit and Grade 1 heroine My Conquestadory didn’t net enough points to make the Kentucky Derby field, but judging by how other Florida horses performed, he could have made his presence felt. Two starts back in the Fountain of Youth (G2), Bourbon War was a much stronger second to Code of Honor, relishing a livelier pace scenario. The Preakness pace should set up well for him, and trainer Mark Hennig is adding blinkers to help Bourbon War’s focus. Value if anywhere near his 12-1 on the morning line, his odds will probably be shorter than that when Irad Ortiz Jr. guides him from post 2.

Another new shooter with serious claims is Alwaysmining, who aims to make Kelly Rubley the first woman to train the winner of a U.S. Triple Crown race. He’d also become the first Maryland-bred to prevail in the Preakness since Deputed Testamony (1983). Rather than jumping on the Derby trail, Alwaysmining stayed home at Laurel and racked up six straight wins, most recently crushing the Federico Tesio by 11 lengths. That earned him an automatic berth in the Preakness. Although yet to face the leading divisional lights, Alwaysmining beat Win Win Win over the winter, his BRIS Speed ratings stack up with the principals, and he’s well drawn in post 7 with Daniel Centeno.

Owendale handily defeated Anothertwistafate in the Lexington (G3), a breakout performance for the colt who’d shown some promise at Fair Grounds. Trained by up-and-coming Brad Cox, who made headlines with champion Monomoy Girl last season, Owendale tried the Risen Star, but found it a case of too much, too soon. He was a different animal entirely two months later at Keeneland, circling the field with a powerful move to win the Lexington convincingly, and bids to keep the momentum going here. Florent Geroux is back aboard the likeable 10-1 chance who breaks from post 5.

Anothertwistafate may not have been seen at his best in the Lexington. The Blaine Wright trainee was running back three weeks after an arguably unlucky second in the Sunland Park Derby (G3), in a last-ditch effort for Derby points that didn’t pan out. By Justify’s sire, Scat Daddy, Anothertwistafate had been on a roll at his home track of Golden Gate Fields, where he punched his Preakness ticket in a seven-length tour de force in the El Camino Real Derby. New rider Jose Ortiz will need to work out a trip, however, from post 12.

Laughing Fox captured the final Preakness “Win and You’re In,” the May 4 Oaklawn Invitational, for Hall of Famer Steve Asmussen. Two starts back in the Arkansas Derby, he was fourth to Omaha Beach, Improbable, and Country House, suggesting he can hold his own in this spot. The deep closer figures to drop back early from post 11 with Ricardo Santana Jr.

Signalman, like Anothertwistafate and Bourbon War, was a “bubble horse” on the outside looking in going into entry time for the Kentucky Derby. Connections didn’t enter, and only later did it become apparent that he could have drawn in, as an also-eligible, following the scratch of Haikal. Winner of last year’s Kentucky Jockey Club (G2) and placed in both the Breeders’ Futurity (G1) and Breeders’ Cup Juvenile (G1), Signalman comes off a third in the Blue Grass. The Ken McPeek trainee has been fairly consistent, but it’s questionable whether others are improving more at the moment. Regular pilot Brian Hernandez Jr. is in the cockpit.

The three with the most to prove are Warrior’s Charge, Market King, and Everfast. Warrior’s Charge, like Owendale trained by Cox, was supplemented for $150,000 after connections did not nominate him to the Triple Crown. Although he’s dominated a maiden and allowance at Oaklawn Park in good time, this marks an ambitious stakes debut. Warrior’s Charge promises to mix it up early from post 3, which would suit stablemate Owendale just fine. Hall of Fame jockey Javier Castellano will try to nurse him along as long as possible.

Another projected pace force is Market King. Hailing from the barn of Hall of Famer and six-time Preakness winner D. Wayne Lukas, Market King was soundly beaten by Omaha Beach and Game Winner in the second Rebel (G2) division, and ran a subpar 11th in the Blue Grass.

The Dale Romans-trained Everfast has hit the board only once from seven stakes tries, when second in the Holy Bull (G2) back in early February. His double-digit losses in the Fountain of Youth, Florida Derby, and Pat Day Mile (G3) explain his 50-1 morning line odds. Romans has made it clear that they’re taking a shot precisely because it’s an open-looking race.

If the Preakness helps to clarify the three-year-old picture for the time being, it could be reshuffled again come the Belmont! 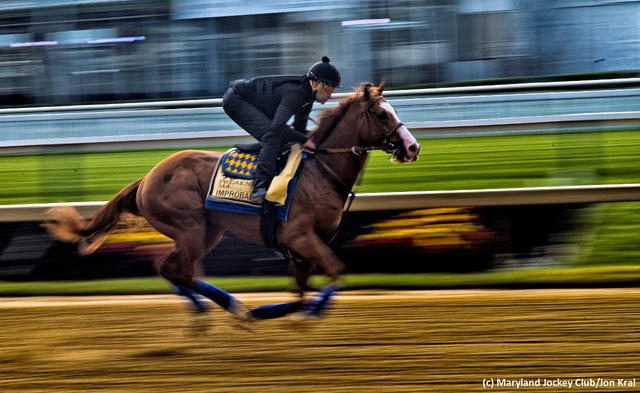