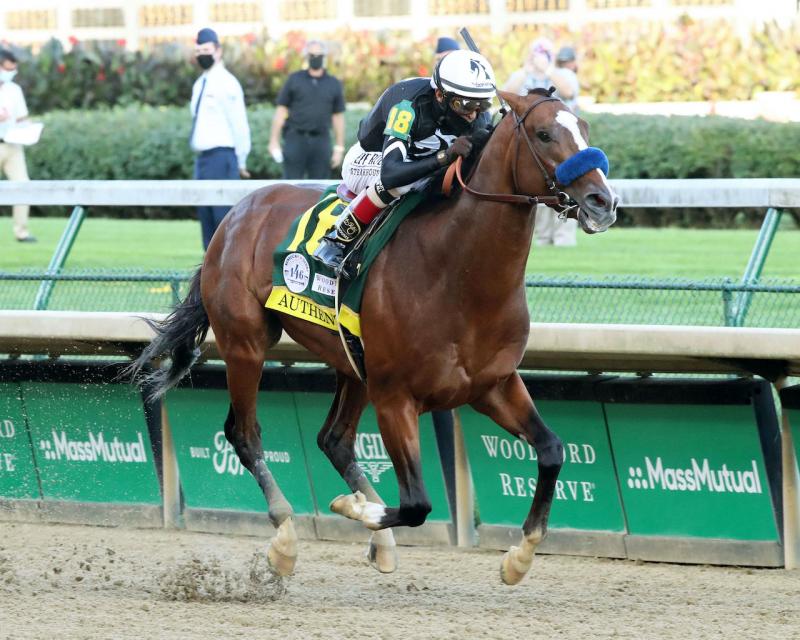 Authentic, who joined an exclusive club by winning the Kentucky Derby (G1) and Breeders’ Cup Classic (G1) in the same season, was the overwhelming choice for 2020 Horse of the Year at Thursday night’s Eclipse Awards.

Held as a virtual event in light of the pandemic, the Eclipse Awards ceremony recognized champions in 17 categories, as determined by voters from the National Thoroughbred Racing Association (NTRA), Daily Racing Form (DRF), and the National Turf Writers and Broadcasters (NTWAB).
Authentic was hailed in nearly-unanimous fashion as champion 3-year-old male, garnering 236 of 238 first-place votes. Tiz the Law, runner-up to Authentic as the odds-on Derby favorite, got the other two ballots.
Past Derby alumni won championships in other divisions. Improbable, promoted to fourth as the lukewarm favorite in the 2019 Kentucky Derby, ranked as the champion older dirt male of 2020. A stablemate of Authentic’s from the Bob Baffert barn, Improbable chased him home in second in the Breeders’ Cup Classic at Keeneland. The old warhorse Whitmore, who had been far behind Nyquist in the 2016 Derby, earned the champion male sprinter title on the strength of his Breeders’ Cup Sprint (G1) victory.
The Kentucky Oaks (G1) also loomed large in the corresponding categories for females. Although Swiss Skydiver was second at Churchill Downs, she came back to outduel Authentic in an epic Preakness (G1) and thereby clinched champion 3-year-old filly honors. Oaks third Gamine starred when cutting back in distance for the Breeders’ Cup Filly & Mare Sprint (G1), and her romp over elders secured her the Eclipse as champion female sprinter.
Monomoy Girl, queen of the 2018 Kentucky Oaks and Breeders’ Cup Distaff (G1), returned to championship form despite being out of action for all of 2019. Going 4-for-4 in 2020, she recaptured her Breeders’ Cup crown and reigned as champion older dirt female.
Both Monomoy Girl and Swiss Skydiver received a few stray votes for Horse of the Year, but Authentic was the landslide winner with 224 votes. The golden statuette was presented to Authentic and his connections, led by B. Wayne Hughes, at the colt's new stud home of Spendthrift Farm in the Bluegrass.
The 2021 Derby and Oaks are uppermost in mind for last year’s 2-year-old champions. Essential Quality’s perfect season culminated in the Breeders’ Cup Juvenile (G1), making him the male champion, while Vequist (from the first crop of Nyquist) parlayed her Breeders’ Cup Juvenile Fillies (G1) score into a divisional Eclipse.
More on the Eclipse Awards, including the champions’ vote totals and lifetime past performances, can be found at Brisnet.com. 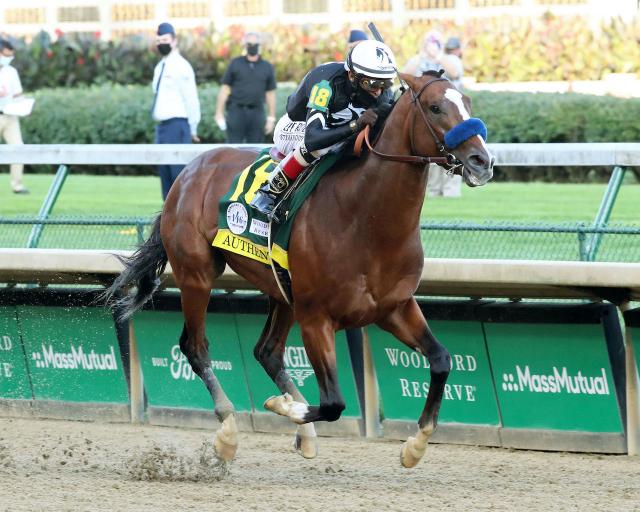