The action beneath the Twin Spires for the Grade I, $3 million Kentucky Derby presented by Woodford Reserve ramped up Saturday morning as Victoria’s Ranch’s King Guillermo posted a bullet five-furlong move in :59.40 – the fastest of 46 horses at the distance.

King Guillermo, trained by Juan Avila and owned by former Major League Baseball five-time all-star Victor Martinez, worked at 7:30 a.m. (all times Eastern) with jockey Miguel Mena aboard through splits of :24.40, :36.80, and :48 prior to galloping out six furlongs in 1:12.

The workout did not necessarily go as scripted with several horses completing their works in front of the $500,000 Arkansas Derby (GI) runner-up. As he neared the wire, Mena had to navigate King Guillermo through a trio of slowing horses and directed the colt from the rail to the far outside and continued galloping out around the clubhouse turn.

“He was working really fast at the wire and he wanted to continue going around the turn,” Mena said. “He went super easy over the ground and it was fun breezing him. He’s a naturally fast horse.”

Avila’s Churchill Downs-based team watched from the backstretch and couldn’t be more pleased following the move.

“He really likes it in Kentucky,” Avila’s exercise rider Edgar Medina said. “Since we got here, he keeps doing better and better. Who knows what the future can hold for him.”

Avila is scheduled to arrive at Churchill Downs next week and Florida-based jockey Samy Camacho is slated to ride King Guillermo in the Kentucky Derby.

The duo, with Shedaresthedevil on the inside, worked through fractions of :23.80 and :47.40 and continued to gallop out together to the backstretch. Monomoy Girl is a likely entrant to the $500,000 La Troienne (GI) on the undercard of the Kentucky Oaks.

“Both of these horses worked really well this morning,” Cox said. “I thought it was a great workout pairing and Shedaresthedevil did well against Monomoy.”

KENTUCKY DERBY FIELD RUNDOWN – There is one race remaining on the Road to the Kentucky Derby: Saturday’s $150,000 Pegasus at Monmouth Park. The race will award the Top 4 finishers points on a 20-8-4-2 scale.

Nominations can be made by calling the Churchill Downs racing office at 502-638-3825 or online: https://www.churchilldowns.com/horsemen/stakes/nomination-forms/.

DOWN THE STRETCH – John Oxley’s Blue Grass Stakes (GII) fourth-place finisher Enforceable is scheduled to work from the starting gate Monday at 7:30 a.m., according to trainer Mark Casse’s assistant David Carroll. … Other Kentucky Derby horses based at Churchill Downs include $200,000 Ellis Park Derby runner-up Attachment Rate, $300,000 Indiana Derby runner-up Major Fed, Arkansas Derby third-place finisher Winning Impression and former $100,000-claim Necker Island. All four horses are expected to have two works prior to the first Saturday in September. … Kentucky Derby favorite Tiz the Law is currently scheduled to arrive in Louisville from New York on Aug. 31. … California-based Kentucky Derby contenders are expected to arrive on Aug. 25 or Sept. 1. Among those contenders would be Santa Anita Derby (GI) winner Honor A. P., and trainer Bob Baffert’s duo of $1 million Haskell (GI) winner Authentic and $100,000 Shared Belief Stakes hero Thousand Words. … The first day of the exclusive training period for Kentucky Derby and Oaks horses at Churchill Downs will be Saturday, Aug. 22 from 7:30-7:45 a.m. 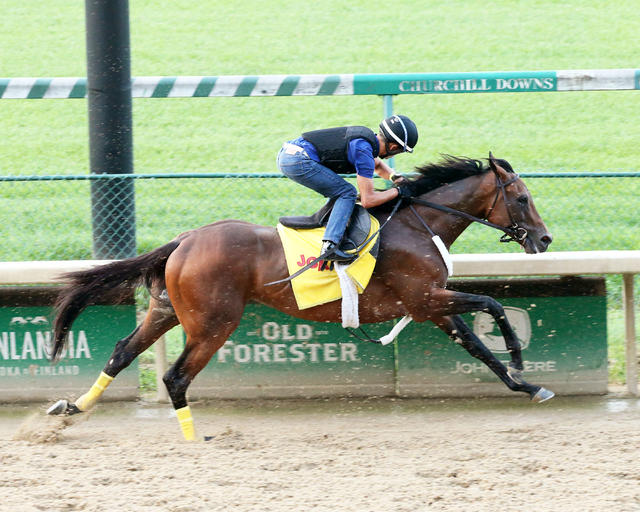