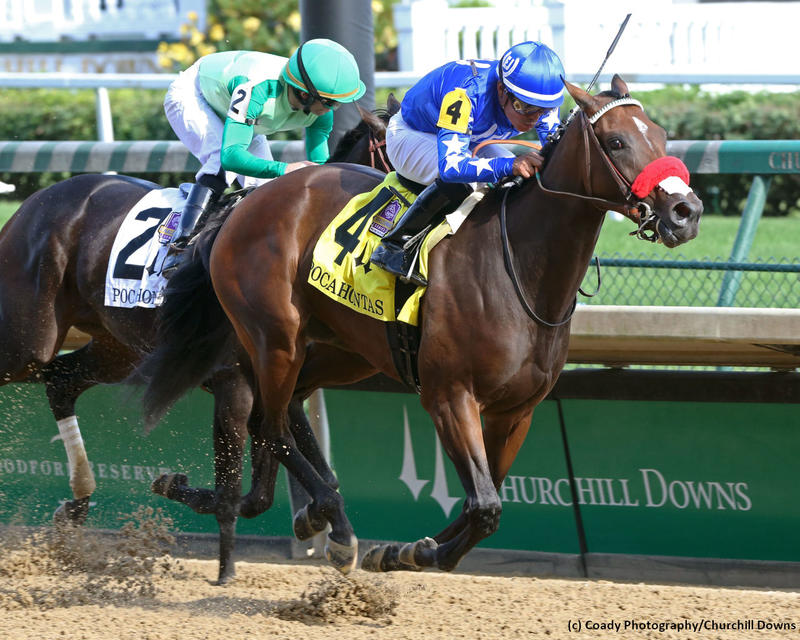 LOUISVILLE, Ky. (Saturday, Sept. 14, 2019) – Southern California invader Lazy Daisy and 43-1 longshot His Glory took turns sharing the lead throughout Saturday’s 51st running of the $200,000 Pocahontas (Grade II) at Churchill Downs but it was Lazy Daisy who emerged as 1 ¼-length winner when the 1 1/16-mile race for 2-year-old fillies reached its conclusion. Portrait, the 6-5 favorite, finished another 3 ½ lengths back in third.

Lazy Daisy broke fast from post position No. 4 and raced one off the rail as His Glory put pressure on the leader from the inside. After a quarter mile in :23.99, His Glory took a narrow lead down the backstretch. They crossed the half-mile marker in :47.90 and Lazy Daisy decided to take over again. His Glory dropped a half-length back and Portrait loomed three-wide as Lazy Daisy came away with the lead on the far turn with three furlongs to run. In the end, Portrait couldn’t keep up but a determined and rail-riding His Glory wasn’t done yet and re-rallied at the top of the stretch to give the winner a test. Lazy Daisy, however, proved best and edged away in the final stages.

“When I turned in the stretch, I put my filly close (to the inside horse), and she got a little intimidated,” Cedillo said. “And that’s where my filly kept going, and going. I got lucky there. Doug (O’Neill) has a lot of good horses, and he knows where to put his horses in a good spot, like a live mount.”

Lazy Daisy, a Kentucky-bred daughter of Paynter out of the Bellamy Road mare Romantic Intention, banked $120,280 for the win and guaranteed herself a starting spot in the $2 million Breeders’ Cup Juvenile Fillies (GI) on Nov. 1 at Santa Anita. The Pocahontas is part of the Breeders’ Cup “Win and You’re In” Juvenile Fillies Challenge Division, which means the winner will also will have her entry fees and a travel allowance paid by Breeders’ Cup.

Lazy Daisy also is the early points-leader on the Road to the Kentucky Oaks after collecting 10 points. The Pocahontas was the first of 30 qualifying races to the Longines Kentucky Oaks (GI) to be run next May, and points were awarded to the Top 4 finishers on a 10-4-2-1 scale.

The order of finish was completed by Blood Curdling, Morning Gold, Lotta Ott, Shadilee and Addilyn. British Idion was scratched.

The winner was bred by John Elder and Paynter Syndicate.

Abel Cedillo, jockey of LAZY DAISY (winner): “When I turned in the stretch, I put my filly close (to the inside horse), and she got a little intimidated. And that’s where my filly kept going, and going. I got lucky there. Doug (O’Neill) has a lot of good horses, and he knows where to put his horses in a good spot, like a live mount. The owner (Erik Johnson), we had a really good Del Mar meet, and he was really happy with the way I rode his horses, so he gave me the opportunity to ride this filly.”

Shaun Bridgmohan, jockey of PORTRAIT (third): “I don’t think she gave me what she’s capable of. At about the eighth pole, where I was getting into her a bit, she ducked in. She’s a young horse (who’s) learning.”