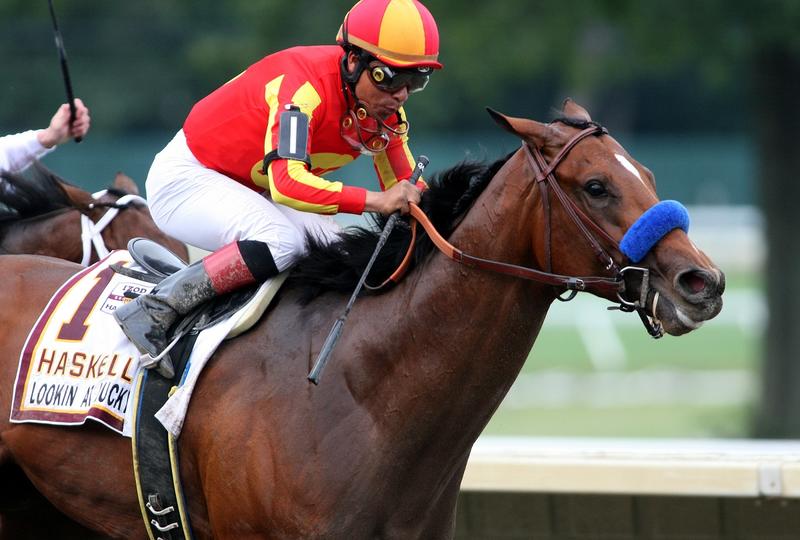 Lookin at Lucky, a champion at both two and three, is now a successful sire (Photo by Mark Wyville/Equi-Photo)
S 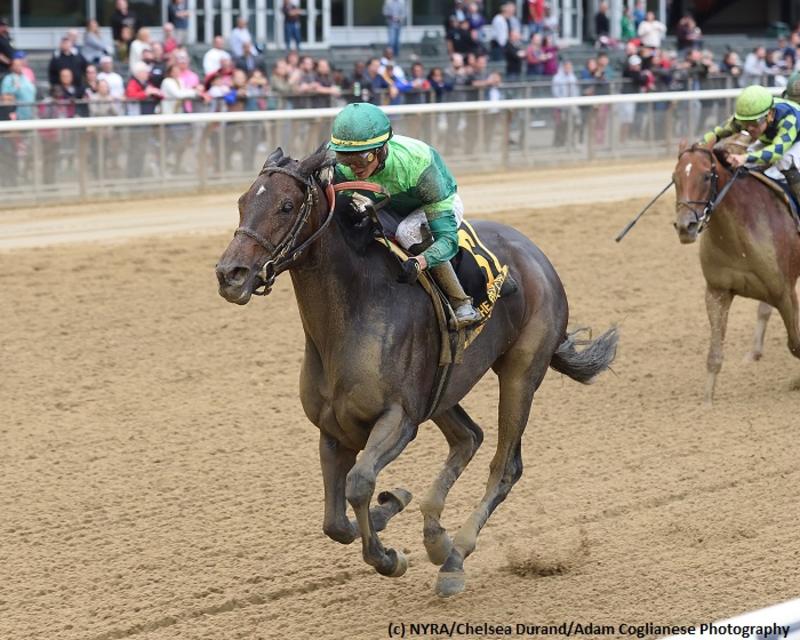 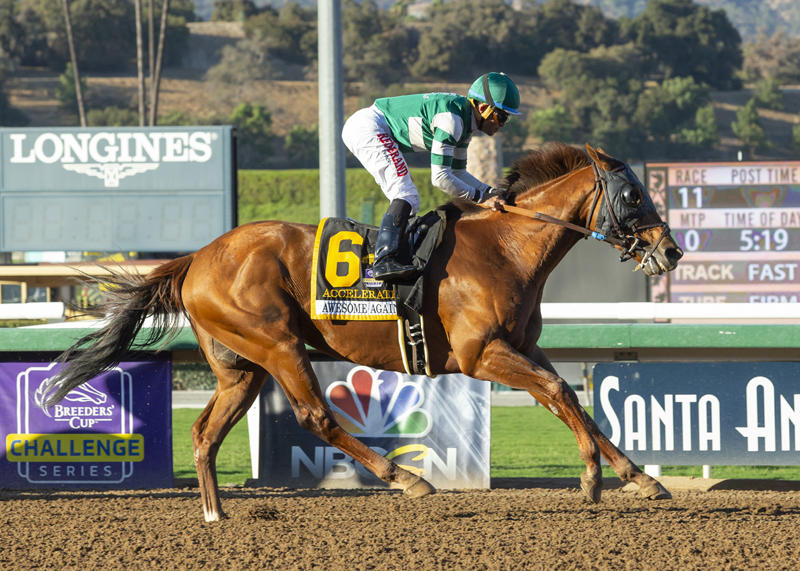 Two-time Eclipse Award champion Lookin at Lucky was out of luck in his Breeders’ Cup attempts during his racing career, but as a sire, he’s in a position to go for an unprecedented Classic (G1)/Distaff (G1) double on November 3 at Churchill Downs.

While a select few stallions have sired winners of both the Classic and Distaff, none has turned the double in the same year. Lookin at Lucky would make history if his daughter Wow Cat upsets the Distaff, and son Accelerate follows up as the favorite in the Classic.

Like Triple Crown champions American Pharoah and Justify, Lookin at Lucky was trained by Hall of Famer Bob Baffert. Now those younger Baffert alums stand alongside the 11-year-old Lookin at Lucky at Coolmore’s Ashford Stud near Versailles, Kentucky.

Lookin at Lucky was purchased for $475,000 as a two-year-old in training by Baffert’s friend, Mike Pegram. Already well known for owning such stars as 1998 Kentucky Derby (G1) and Preakness (G1) champion Real Quiet and Hall of Famer Silverbulletday, Pegram campaigned his new recruit along with partners Karl Watson and Mike Weitman.

By Smart Strike, the same sire as Hall of Famer Curlin, Lookin at Lucky began his career with four straight victories including the Best Pal (G2), Del Mar Futurity (G1), and Norfolk (the race now known as the American Pharoah) (G1). He was expected to stay perfect in the 2009 Breeders’ Cup Juvenile (G1), where he went off as the 2-1 favorite. But Lookin at Lucky endured a wide trip from the far outside post 13, and got nailed on the line by 30-1 European shipper Vale of York.

Rebounding with a victory in the CashCall Futurity (G1) at now-defunct Hollywood Park, Lookin at Lucky was voted champion two-year-old male. He would go on to win another championship title at three, but after a luckless spring that called his name into question.

Lookin at Lucky had to overcome significant trouble to get up in time the 2010 Rebel S. (G2) at Oaklawn Park. He had no realistic chance to recover, however, in the Santa Anita Derby (G1), once he was checked hard on the far turn. Yet the hard-trying colt did his best to regroup in third.

Worse was to come in the Kentucky Derby. Sent off as the favorite despite drawing the problematic post 1, Lookin at Lucky was clobbered in the early going as his rivals made their mad dash to get position from outer posts. He found himself squeezed back as far as 18th, but in his characteristic fashion, he soldiered on gamely and closed for sixth to Super Saver.

Lookin at Lucky set the record straight two weeks later in the Preakness, with new rider Martin Garcia aboard, and solidified his claims to be best in the division with a romp in the Haskell Invitational (G1).

After making it three in a row in the Indiana Derby (G2), Lookin at Lucky returned to Churchill Downs for the Breeders’ Cup Classic. It was a tough year to attempt the Classic, with unbeaten Zenyatta lining up for a title defense, and such top older males as Blame in opposition.

Lookin at Lucky unleashed a bold move turning for home to reach the front rank, but he could not go on as Blame – flawlessly ridden by his former jockey, Garrett Gomez – powered ahead and fended off Zenyatta. The 1 1/4 miles arguably a shade too far for him, Lookin at Lucky was outstayed in the final strides by Fly Down, who edged him for third at the wire.

Retired as the first male since Hall of Famer Spectacular Bid to earn championship honors at two and three, Lookin at Lucky has sired such notable runners as Lookin at Lee, the 2017 Kentucky Derby runner-up, and fellow millionaires Money Multiplier, Madefromlucky, and Breaking Lucky.

But his two best offspring, Accelerate and Wow Cat, are competing at the 2018 Breeders’ Cup.

Chilean import Wow Cat, conceived during Lookin at Lucky’s sojourns in Chile during the Southern Hemisphere breeding season, was an undefeated Triple Crown winner versus the boys in her homeland. She joined trainer Chad Brown stateside this season, and needing some time to acclimate, just scored her first U.S. win in the Beldame (G1), a key prep for the Distaff.

Accelerate, the early Classic favorite, ranks as the nation’s leading older male. A neck away from a perfect 2018, the John Sadler trainee dominated the three major races in the division in Southern California – the Santa Anita H. (G1), Gold Cup at Santa Anita (G1), and Pacific Classic (G1), the latter by a stakes-record 12 1/2-length margin – and captured his final prep, the Awesome Again (G1).

Although unsuccessful in his prior Breeders’ Cup tilts in the Dirt Mile (G1), finishing third in 2016 and a subpar ninth last year, Accelerate has developed into a true 1 1/4-mile Classic type now. He faces some historical headwinds, based mainly on prep race trends and to a lesser extent his trainer’s winless record in the Breeders’ Cup.

But rival trainer Baffert has tabbed Accelerate as the one they all have to beat. If he performs up to that label, Accelerate would put a feather in the cap of former Baffert star Lookin at Lucky. 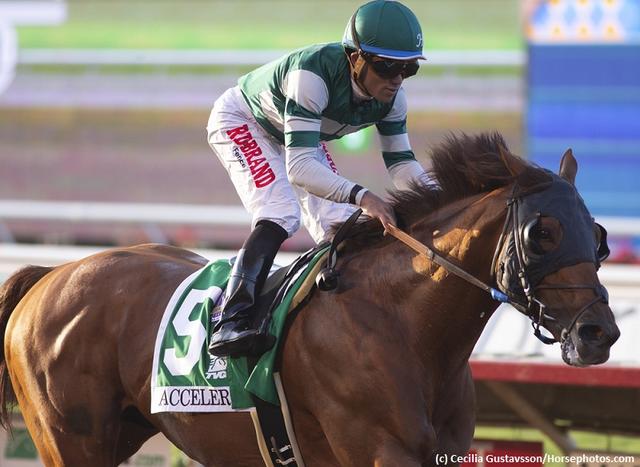