Lyrics to ‘My Old Kentucky Home’

In Kentucky there are three major traditions – Basketball, bourbon and horse racing.

Therefore it makes perfect sense that the most famous horse race, the Kentucky Derby, should feature the state’s official song, “My Old Kentucky Home.”

The Commonwealth of Kentucky adopted the song in 1928, but it was originally published in 1853 as “My Old Kentucky Home, Good-Night!”

The song was written by Stephen Collins Foster, who is known as “the father of American music,” and is believed to have been inspired by Harriet Beecher Stowe’s novel Uncle Tom’s Cabin. In fact, Foster’s first draft of the song featured a working title of “Poor Uncle Tom, Good Night.”

Not only did the song’s title undergo a change before publication, but the lyrics of “My Old Kentucky Home” were altered in 1986. It’s unclear when it became the definitive song for the Kentucky Derby, but some report it was played as early as 1921 for the 47th running.

Other newspaper articles indicate that 1930 was the first time it played for the post parade before the Kentucky Derby.

Today, it is a tradition not to be missed. As the University of Louisville Marching Band performs the music, the crowd of more than 150,000 fans raise their voices to sing along and the horses parade before the grandstand on their way to “The Most Exciting Two Minutes in Sports.”

The sun shines bright in the old Kentucky home,
Tis summer, the people are gay;
The corn-top's ripe and the meadow's in the bloom
While the birds make music all the day.

The young folks roll on the little cabin floor
All merry, all happy and bright;
By 'n by hard times comes a knocking at the door
Then my old Kentucky home, Good-night! 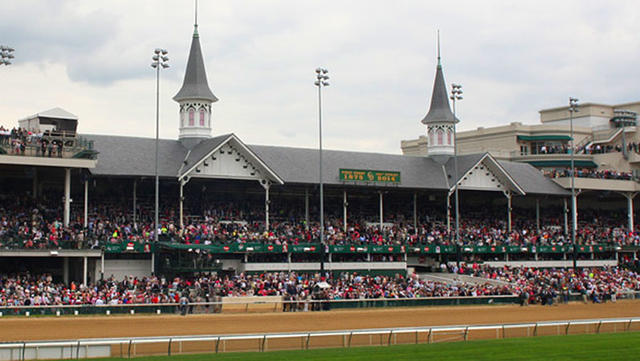