Mackinnon switches to dirt for Sham

A multiple stakes winner on turf, and a fast-closing third in the Breeders’ Cup Juvenile Turf (G1), Mackinnon will move to the main track for Saturday’s $100,000 Sham S. (G3) at Santa Anita.

Five runners are set for the two-turn mile test, a Road to the Kentucky Derby series qualifier awarding points on a 10-4-2-1 scale.

Trained by two-time Kentucky Derby winner Doug O’Neill, Mackinnon reeled off three consecutive wins on turf prior to the Juvenile Turf. The chestnut is by 2015 Triple Crown winner American Pharoah, and out of a mare by Scat Daddy, sire of 2018 Triple Crown victor Justify, so dirt influences are present in Mackinnon’s pedigree. Juan Hernandez retains the mount.

Rockefeller, a convincing wire-to-wire winner of the Nov. 7 Nashua S. (G3) at Belmont Park, is a top contender, and he’ll be joined in the starting gate by stablemate Newgrange, a convincing debut winner at Del Mar in late November, but neither is eligible to earn points from the Bob Baffert stable. Flavien Prat rides Rockefeller, and John Velazquez sticks with Newgrange.

Completing the field are Oviatt Class, a late-running fifth in the Breeders’ Cup Juvenile (G1); and Degree of Risk, who has placed in four stakes on turf and synthetic surfaces. 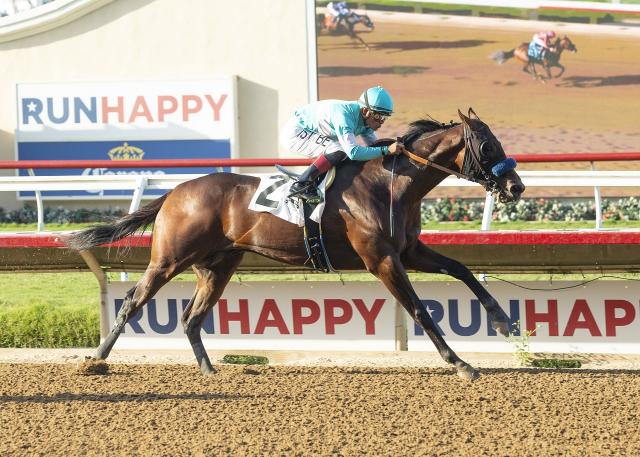