The victory by Malagacy (#4, 50 points) in last Saturday's Rebel (G2) at Oaklawn Park temporarily pushed stablemate One Liner (#21, 10) out of the Kentucky Derby (G1) Top 20, but with 100 points-to-the-winner preps on the horizon, trainer Todd Pletcher's (arguable) leading hope will get his chance to solidify his position in the Derby field with a top-two placing in the Wood Memorial (G2), Blue Grass (G2), or Santa Anita Derby (G1), all scheduled for April 8.

Malagacy virtually assured his position in the Derby field with his stakes debut victory, though it's expected he will get an additional chance to prove his ability at a longer distance in the April 15 Arkansas Derby (G1) over 1 1/8 miles.

Untrapped (#7, 34) improved his position on the Derby leader board running third in the Rebel, though the Steve Asmussen trainee has now missed reaching the winner's circle in three preps so far this winter. Meanwhile, the maiden Sonneteer (20 points) surprisingly entered the Derby picture with his second-place finish in the Rebel. However, the colt is currently not Triple Crown nominated, thus would not make the field if the race were held today.

The final 50 points-to-the-winner preps will be held this weekend: Saturday's $500,000 Spiral (G3) at Turfway Park and Sunday's $800,000 Sunland Derby (G3) at Sunland Park. Earlier Saturday, the first prep worth 100 points to the winner, the $2 million UAE Derby (G2), will be run at Meydan in Dubai. All can be viewed and wagered on at TwinSpires.com. 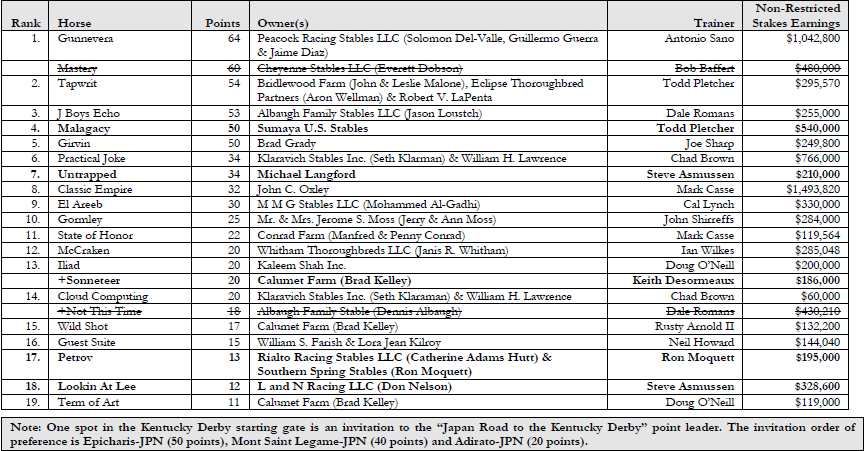