Mastery defection leaves room near the top of Derby leaderboard

In the span of less than a minute last Saturday, the Kentucky Derby (G1) went from having a solid favorite to having arguably its most disappointing and sudden withdrawal in many years, or at least in the Road to the Kentucky Derby Series era.

Mastery, so impressive in winning the San Felipe (G2) on the front end, earned 50 qualifying to push his total to 60, but the Bob Baffert-trained colt pulled up with a condylar fracture to his left front and was immediately removed from Derby consideration.

San Vicente (G2) winner Iliad (#12, 20 points), making his two-turn debut in the San Felipe, fared best of the others and now assumes a leading role among West Coast Derby prospects. However, Gormley (#8, 25) and Term of Art (#17, 11) saw their stocks diminish with the severity of their losses. Gormley, especially, appears a candidate on the decline having now thrown two clunkers in his last three starts (the Breeders' Cup Juvenile [G1] was the other).

The weekend's other big winner was Tapwrit (#2, 54), who earned a facile victory in the Tampa Bay Derby (G2) and solidified a place in the starting gate at Churchill Downs. State of Honor (#10, 22) and Wild Shot (#14, 17) finished behind Tapwrit, as they had in last month's Sam F. Davis (G3), but neither significantly improved their qualifications as logical threats to reach the Kentucky Derby winner's circle.

This week's lone qualifying prep is Saturday's $900,000 Rebel (G2) at Oaklawn Park. The field is expected to include Untrapped (#9, 24), Lookin At Lee (#16, 12) and Uncontested (#18, 11) among the Top 20. Other leading candidates are American Anthem and Royal Mo from California, Malagacy from Florida, and the locally-based Petrov and Silver Dust.

Wagering and video of the Rebel will be available at TwinSpires.com. 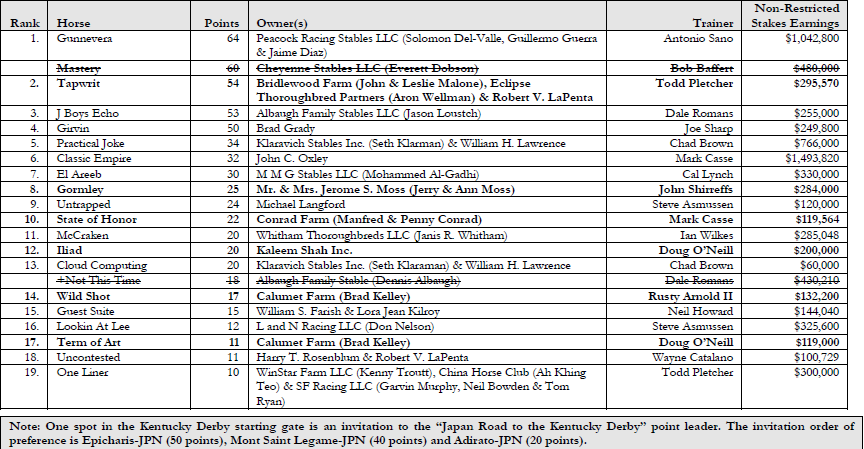