Mastery off Derby trail after brilliant win in San Felipe

Mastery turned in a masterful performance in Saturday's $400,690 San Felipe (G2) at Santa Anita, but the long-term Kentucky Derby (G1) prospects ended for the star three-year-old strides after the wire when he was dismounted, unsaddled, and vanned back to the stable area.

Jockey Mike Smith dismounted after feeling something was not right regarding Mastery's left hind leg, but it was later reported that the colt had suffered a condylar fracture to his left front.

"I felt it about 10 jumps after the wire," Smith later said. "All of a sudden he just picked up his back leg. At that point I couldn't tell what it was. After a minute or so and he started walking, he seemed fine."

The colt was vanned back to the barn as a precaution, with assistant trainer Jimmy Barnes later reporting Mastery walked off the van okay. However, the fractured left front was soon discovered.

Prior to the unfortunate incident, Mastery had turned in quite a show in the 1 1/16-mile San Felipe, in which he was made the 4-5 favorite. Sent to the front by Smith, the undefeated Los Alamitos Futurity (G1) winner set a strong pace of :23.50, :46.79, and 1:10.48, all the while being hounded down the backside by 2-1 second choice Gormley. They in turn were followed closely by 3-1 third choice Iliad.

Around the far turn, Mastery began to edge clear of Gormley, who came under a drive but ultimately lacked a response, and was then challenged by Iliad. In upper stretch, Mastery turned back that rival and zoomed clear to win by 6 3/4 lengths in a time of 1:42.28.

Owned by Cheyenne Stables and trained by Bob Baffert, Mastery paid $3.80 to win. Iliad finished 1 3/4 lengths ahead of Term of Art, a 62-1 chance, with Gormley fourth.

As part of the Road to the Kentucky Derby Series, the San Felipe awarded points of 50-20-10-5 to the top four finishers. Mastery's total improved to 60 Derby eligibility points, which he will not use. Iliad has 20 points, Term of Art 11 and Gormley 25.

By Candy Ride and out of Steady Course, by Old Trieste, Mastery is a half-sister to stakes winner Clear Sailing and is from the family of Group 1 winner and noted sire Miswaki. 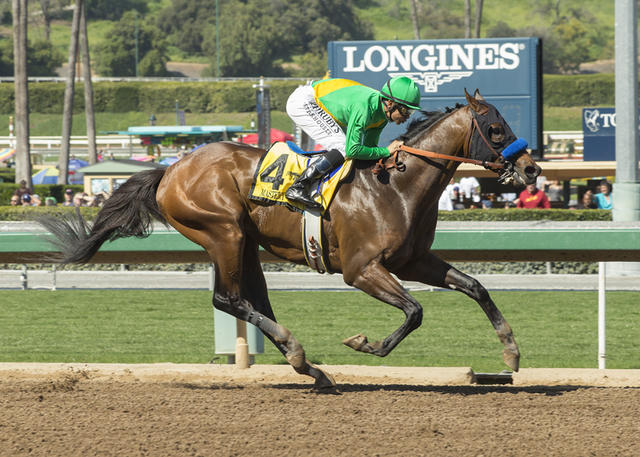