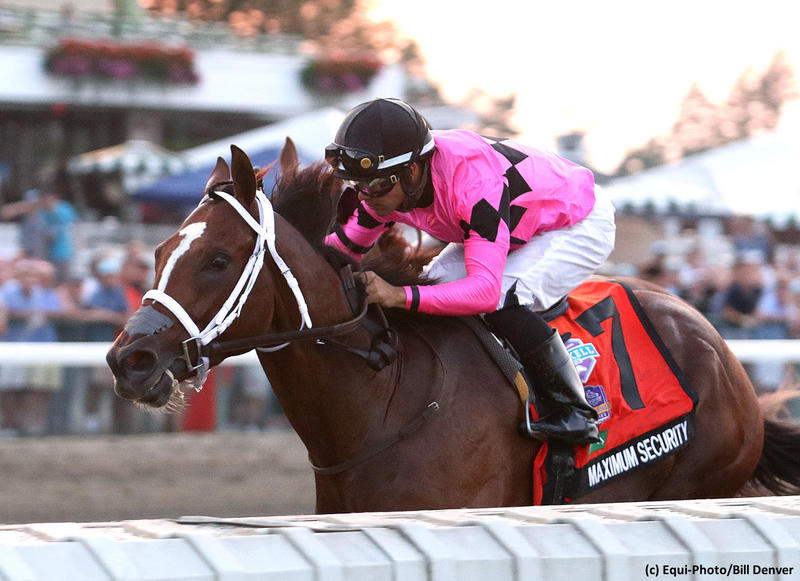 Fans had Kentucky Derby (G1) déjà vu in Saturday’s $990,000 Haskell Invitational (G1), where Maximum Security posted a gutsy victory but had to await a stewards’ ruling regarding an incident on the far turn. Unlike his Derby disqualification, this time Gary and Mary West’s homebred was declared the official winner at Monmouth Park.

Aside from reclaiming pro tem leadership of a fluctuating three-year-old division, Maximum Security earned a free berth to the Breeders’ Cup Classic (G1) with the Haskell being a “Win and You’re In” event.

Weather became part of the Haskell story too – not rain as on Derby Day, but excessive heat that prompted Monmouth officials to cancel six non-stakes races and shift the stakes to early evening. The Haskell was pushed back to 8:05 p.m. (EDT), hours after the 5-6 p.m. window for the NBC broadcast, which was repurposed into a race preview.

Maximum Security was sent off as the 4-5 favorite despite a prep loss in the June 15 Pegasus to King for a Day. Trainer Jason Servis was much happier with his training going into the Haskell, and he ran accordingly.

Instead of dashing to the early lead as in the Florida Derby (G1), Kentucky Derby, and Pegasus, Maximum Security reverted to stalking tactics. There was other speed signed on, so jockey Luis Saez took up an outside stalking position.

King for a Day, in contrast, endured a more demanding trip forcing the pace set by longshot Bethlehem Road. Mucho Gusto, aiming to pad Hall of Fame trainer Bob Baffert’s record Haskell tally, was perched out wide but otherwise in a good spot conserving energy just off the pace.

Maximum Security launched his bid on the far turn, joining King for a Day as Bethlehem Road dropped out, and Mucho Gusto made it three abreast. King for a Day was being scrubbed along to keep up on the inside, then suddenly checked hard and lost all chance.

Thus the Haskell turned into a virtual match race in the stretch, and Mucho Gusto threw down a serious challenge to Maximum Security. As in the Derby, the favorite kept finding more to repel his pursuer, and edged 1 1/4 lengths clear.

The stewards posted the inquiry sign to take a look at the far turn, and Maximum Security fans had to hold their collective breath. Although King for a Day was shut off, the video evidence was inconclusive at the decisive point. Did Maximum Security veer in on his own? Did Mucho Gusto contribute to the incident in any way as he loomed on the outside? Or was King for a Day already beginning to tire?

The inquiry didn’t last long before the stewards ruled that the result stood as is, and Maximum Security kept his Haskell trophy. Not to be lost in the renewed controversy is his fast time for 1 1/8 miles – 1:47.56 was slightly quicker than older horse War Story’s 1:47.65 in the Monmouth Cup (G3) earlier on the card. The track record is still held by Spend a Buck, the 1985 Kentucky Derby champion, who sped in 1:46.80 in that year’s Monmouth H. (G1).

Mucho Gusto ran a terrific race in defeat, drawing eight lengths clear of the rest. The 34-1 longshot Spun to Run got up for third. Preakness (G1) runner-up Everfast closed from last for fourth, a half-length up on King for a Day, who was taken care of by Hall of Famer John Velazquez after the incident on the far turn. Bethlehem Road retreated to last in the field, and Joevia was withdrawn.

Maximum Security has bankrolled $1,279,400 from his record of five wins and one second from seven starts, his Derby disqualification counting as unplaced since he was demoted to 17th. He could advance to the August 24 Travers (G1) at Saratoga, the summer goal for the Wests’ champion Game Winner as well.

The “Midsummer Derby” will come into clearer focus after next Saturday’s Jim Dandy (G2) at the Spa, the next stop on the roller coaster ride of the Triple Crown class of 2019.