Medina Spirit all heart in Robert B. Lewis 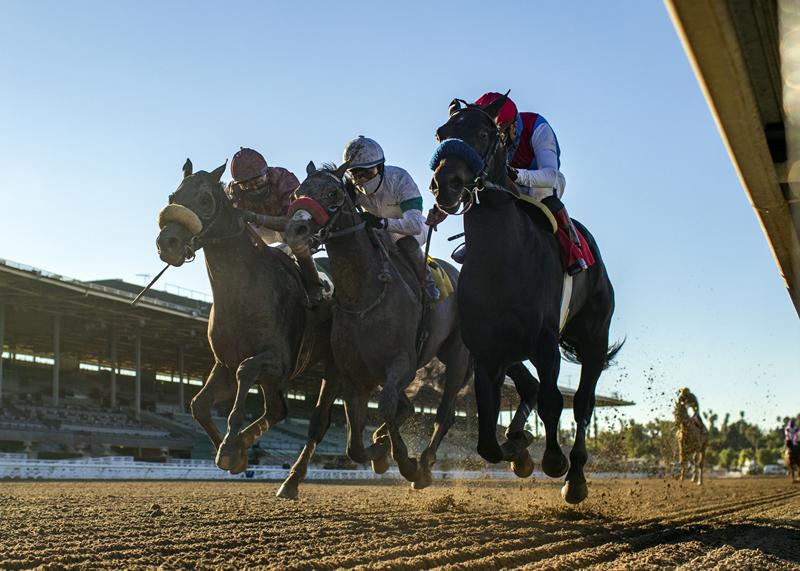 After expending energy to set a strong pace on a deep, demanding track at Santa Anita, Medina Spirit had a right to succumb in Saturday’s $100,500 Robert B. Lewis S. (G3). Instead, the Bob Baffert trainee was lion-hearted as he fended off challenges from Roman Centurian and Hot Rod Charlie in a three-way thriller.

Medina Spirit was coming off a second in the Sham (G3) to stablemate Life Is Good, the early Kentucky Derby (G1) favorite. That made Medina Spirit the even-money choice here, despite the presence of a few classy rivals including Hot Rod Charlie, the runner-up in the Breeders’ Cup Juvenile (G1).
Unlike his pace-chasing tactics in the Sham, Medina Spirit was hustled to the lead this time by Abel Cedillo. The Zedan Racing Stables runner used his rail post to help him beat Wipe the Slate and Parnelli to the lead. Both pursued him until they began to tire and dropped back on the far turn.
Medina Spirit got no breather as a fresh set of rivals engaged him into the stretch. Hot Rod Charlie, reserved in fourth early, and Roman Centurian, who had bided his time in last, ranged up alongside the longtime leader. Roman Centurian appeared to have the most momentum of all, but Medina Spirit refused to wilt, and Hot Rod Charlie hung tough between them. After a protracted tussle, Medina Spirit kept his neck in front of Roman Centurian, with Hot Rod Charlie a nose away in third.
By negotiating 1 1/16 miles in 1:46.26, Medina Spirit extended Baffert’s record number of wins in the Lewis to nine. Poignantly, his fighting spirit reminded Baffert of his 1997 Kentucky Derby winner, Hall of Famer Silver Charm, who raced for the late Bob and Beverly Lewis.

"That reminded me a little bit of Silver Charm," Baffert said. "He had every reason to give it up late down in the stretch (when) those horses came to him. I thought he was beat. I thought they were going to get by, and he wouldn’t let them by - he fought on. He really is not as tired as I thought he would be. He got caught up in the speed duel. We were afraid about the one-hole and I was hoping he could just back off a little bit...

"He’s going to get a lot out of this race, but I think you have to take him pretty seriously now. Those are two good horses that he beat, so I’m really fortunate."

Medina Spirit added 10 more Derby points, increasing his total to 14. Roman Centurian took home four points in this encouraging stakes debut. Hot Rod Charlie, who received two points for third, now has 10.
The top three pulled 11 lengths clear of Baffert’s other runner, Spielberg. His one point in fourth bumped him up to 13 overall. As an indication of how hard Medina Spirit went early, stalkers Parnelli and Wipe the Slate were the last two across the wire.
Medina Spirit, a debut winner at Los Alamitos Dec. 11, has bankrolled $105,200 from his 3-2-1-0 record. The bargain $35,000 buy at OBS last summer is from the first crop of Protonico, a Grade 2-winning son of “Iron Horse” Giant’s Causeway. 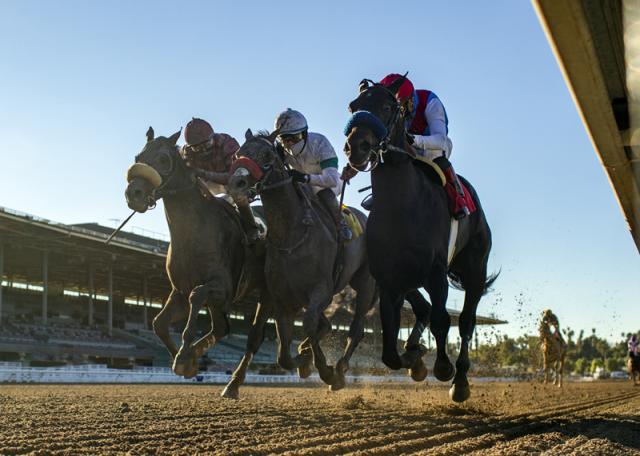