Mendelssohn and more: Digging into European-based nominees to 2018 Triple Crown

Of the 360 three-year-olds nominated to the 2018 Triple Crown, 13 are based in Europe. Although no European shipper has managed to win the Kentucky Derby (G1), Great Britain’s Bold Arrangement was runner-up in 1986, and the Continent can threaten again with the right horse.

Master Irish trainer Aidan O’Brien has sent out five Kentucky Derby starters so far, his best result being a fifth with Master of Hounds in 2011. Absent from the Run for the Roses since 2013, O’Brien may be back again with Beholder’s half-brother Mendelssohn, the Breeders’ Cup Juvenile Turf (G1) winner, who spearheads his roster of six 2018 Triple Crown nominees.

A $3 million sales topper as a yearling at Keeneland September, Mendelssohn offers plenty of pedigree appeal. His internationally renowned sire, Scat Daddy, was one of the main contenders for the 2007 Kentucky Derby after capturing the Florida Derby (G1), Fountain of Youth (G2), and Champagne (G1). Unfortunately, he sustained a tendon injury when finishing 18th in the Derby and soon retired to stud. Mendelssohn’s dam, the stakes-winning Leslie’s Lady, had produced two stars before he came along – sure-to-be Hall of Famer Beholder, a four-time champion and three-time Breeders’ Cup winner, and 2007 CashCall Futurity (G1) hero Into Mischief, who was knocked off the 2008 Derby trail by injury and later became a successful sire.

Mendelssohn was very green at the beginning of his career, as you might expect for a late foal born on May 17. After a non-threatening eighth on debut, he broke his maiden second time out at the Curragh in August, but wound up a disappointing last in the Champagne (G2) at Doncaster.

Then an equipment change turned Mendelssohn around: he added blinkers, and to use O’Brien’s phrase, he “grew another leg.” He outperformed his 50-1 odds with a second in the Dewhurst (G1), and put it all together in the Breeders’ Cup Juvenile Turf at Del Mar. Interestingly, Mendelssohn almost competed in the Breeders’ Cup Juvenile (G1) on dirt. O’Brien decided to take the more conservative route and stick to turf with a colt who was just figuring out the game.

The Juvenile Turf form has since been flattered. Two of his rivals have come back with strong efforts on the switch to dirt. Fourth-placer Catholic Boy dominated the Remsen (G2), and Snapper Sinclair (12th) was most recently third in the Lecomte (G3). Two others have run well over the grass at Gulfstream Park. Juvenile Turf runner-up Untamed Domain was an honorable third in the Dania Beach (G3), and eighth Flameaway bounced back to take the Kitten’s Joy.

If Mendelssohn can transfer his game to the main track, and continue his progression, he could develop into a proper Kentucky Derby contender.

O’Brien has three other Scat Daddy colts in the mix.

Seahenge, who rallied late to win the Champagne as Mendelssohn retreated, hails from a dirt-oriented family himself. The $750,000 Keeneland September yearling is out of Fools in Love, a half-sister to 2015 Louisiana Derby (G2), Risen Star (G2), and Lecomte victor International Star. Fools in Love, a daughter of Not For Love (the broodmare sire of 2014 Derby champion California Chrome), herself won or placed in five dirt stakes.

A winner first time out at Naas, Seahenge was fifth in the Vintage (G2) at Glorious Goodwood before his Champagne victory. He was unable to follow up in his two ensuing starts, finishing a troubled third in the Dewhurst and only eighth in the Racing Post Trophy (G1).

Murillo, a $500,000 Keeneland November weanling, has surface versatility on both sides of pedigree. His dam, Mostaqeleh, was Group 2-placed on turf in France, but four of her six winning offspring have scored on dirt from the United States to as far afield as Dubai and Japan.

Although coming to hand early enough to get started in May, Murillo was a surprising last in his debut. He learned his job that day, since he returned to win smartly at Tipperary. Next seen at the prestigious Royal Ascot meeting, Murillo was a staying-on third, beaten just a half-length, in the Coventry (G2). He wheeled back 11 days later for the Railway (G2) at the Curragh, finishing third as the favorite. Murillo headed to the sidelines after that July 1 contest, so he’ll be coming off an extended layoff.

Sioux Nation has both surface and distance questions to answer if he attempts the Derby trail. His maternal side is heavily tilted toward both turf and speed. His dam, Dream the Blues, is a daughter of Oasis Dream and Catch the Blues, who was twice Ireland’s champion older sprint mare. Sioux Nation had the speed and precocity to begin his career sprinting five furlongs last April, so his own history reinforces skepticism about a Derby candidacy.

Requiring good (or firmer) ground to deliver his best, Sioux Nation won the five-furlong Norfolk (G2) at Royal Ascot and the Phoenix (G1) at the Curragh in his optimal conditions. His only unplaced efforts have come on rain-softened going, including a sixth in the September 30 Middle Park (G1) in his final outing at two.

U S Navy Flag’s surface issues came to the fore in the Breeders’ Cup Juvenile at Del Mar, where he set a contested pace and gave way badly in 10th. Thus as good as he is on turf, his dirt aptitude is an unmissable question mark.

Out of multiple Irish and French champion Misty for Me, a daughter of supersire Galileo, U S Navy Flag was a dramatic improver last season. He took a while to find himself, but ultimately ranked as Europe’s champion two-year-old through victories in the Middle Park (G1) and Dewhurst. That’s an exceedingly rare double not achieved since 1982.

U S Navy Flag’s ample racecourse experience is probably what persuaded O’Brien to let him, rather than stablemate Mendelssohn, try the Breeders’ Cup Juvenile on dirt. Full sister Roly Poly overachieved to win three Group 1 races as a sophomore, so U S Navy Flag may find more in 2018. If he does, it’s likelier to come on turf.

Threeandfourpence has the most to prove of O’Brien’s six, from both pedigree and performance angles.  He’s a full brother to a pair of major two-year-old winners who didn’t accomplish anything at three – 2015 Breeders’ Cup Juvenile Turf hero Hit It a Bomb and 2016 European champion juvenile filly Brave Anna.

On the other hand, since Threeandfourpence has yet to reach the heights they did, perhaps he has more scope to improve this campaign. As a May 12 foal, he did not get going until the second half of the season, finishing a good second before scoring next out. Upped in class for the Dewhurst, Threeandfourpence was fourth to U S Navy Flag, Mendelssohn, and Seahenge. It’s debatable whether he can outstrip them or handle dirt, being out of a Sadler’s Wells mare.

O’Brien’s Coolmore patrons tried to buy Walk in the Sun at last May’s Arqana Sale in France. But they lost the bidding war to Kerri Radcliffe, acting on behalf of Phoenix Thoroughbred, who paid a sale-record €1.4 million for the unraced two-year-old. Thus he joined British trainer Jeremy Noseda, Radcliffe’s husband.

Walk in the Sun might be the one who got away from two global empires. He was actually bred by Godolphin, but cast off for a mere $15,000 as a yearling at Keeneland September, before morphing into a hot commodity at Arqana.

By 2007 Kentucky Derby winner Street Sense, Walk in the Sun is out of a mare by 1977 Triple Crown legend Seattle Slew. His dam, multiple Group 3-placed stakes victress Mystic Melody, is a half-sister to multiple Grade 1-winning millionaire Alpha, who competed in the 2012 Kentucky Derby and went on to dead-heat in the Travers (G1).

Walk in the Sun debuted January 26 at Kempton Park. So well-regarded that he lured ace jockey Ryan Moore out of his winter holiday, he did not disappoint. Walk in the Sun belied his inexperience by outdueling Godolphin’s First Contact (a first-out winner himself) in a fast time of 1:23.85 for seven furlongs over the Polytrack. Short on experience but hopefully long on ability, Walk in the Sun is a fascinating colt to follow.

Stablemate and fellow Kentucky-bred Gronkowski, a 300,000 guineas purchase as a two-year-old in training at Tattersalls last April, has a dirt pedigree on his dam’s side. The son of Australian legend Lonhro is out of a mare by two-time champion Lookin at Lucky, bitterly unlucky in the 2010 Kentucky Derby but smashing in the Preakness (G1). Gronkowski’s dam is a half-sister to Flashy Bull, unplaced in the 2006 Kentucky Derby but later victorious at Churchill Downs in the 2007 Stephen Foster (G1).

Gronkowski has improved from start to start, beginning with a slow-starting seventh at Newbury in September, followed by a second at Newmarket, and finally a breakout score in his latest. The addition of blinkers, and switch to Polytrack at Chelmsford, combined to get him in the win column.

There’s another British-based nominee with upside, Apple Tree Stud’s homebred Three Weeks from the William Haggas yard. Another Kentucky-bred, he’s by leading sire Tapit from a prolific turf family, with his dam being a half to Irish co-champion Princess Highway.

Three Weeks has raced exclusively on all-weather surfaces so far. After a clueless eighth first time out at Kempton in November, the gray has won at Lingfield and Newcastle, each time growing in professionalism.

As with Walk in the Sun and Gronkowsi, Three Weeks has yet to face the kind of class tests that the O’Brien runners have endured.

Famed Irish horseman Dermot Weld, who plundered the 1990 Belmont S. (G1) with Go and Go, fields the final four European-based nominees. At the moment, none looks like a candidate to emulate Go and Go’s feat.

Chief among them is the Aga Khan’s homebred Hazapour. But as a son of Shamardal out of a half-sister to 2016 Epsom and Irish Derby (G1) star Harzand, he shapes up as a more logical contender for the European classics. Seventh in the same maiden that introduced O’Brien’s Threeandfourpence, Hazapour came back to win at Galway, where Weld loves to run his better prospects. He concluded his juvenile campaign with a third in the Eyrefield (G3).

Burgundy Boy, fourth in the Eyrefield, was since transferred to Weld by new ownership. Originally trained by Sheila Lavery for her niece, Burgundy Boy finished fourth in a pair of good maiden races – first to Verbal Dexterity and then to O’Brien’s Gustav Klimt – before venturing to Roscommon to shed his maiden tag. By Johannesburg’s son Red Jazz, Burgundy Boy has a totally turfy bottom half of the pedigree.

The other two are unraced. Make the Switch, a Moyglare Stud homebred by Dansili and out of multiple Grade 1 star Switch, and Calumet Farm’s Bandua, a $150,000 Keeneland November weanling who has arguably more of a shot on dirt. By The Factor, Bandua is a half-brother to graded turf winners Tale of a Champion and Mr. Roary, but his half-sister Ilusora is a Group 3 winner on both turf and dirt in Argentina. They are all out of the Seattle Slew mare If Angels Sang, a descendant of the brilliant Terlingua, dam of Storm Cat.

Might we see some of these 13 nominees in a scoring race on the European Road to the Kentucky Derby? Stay tuned! 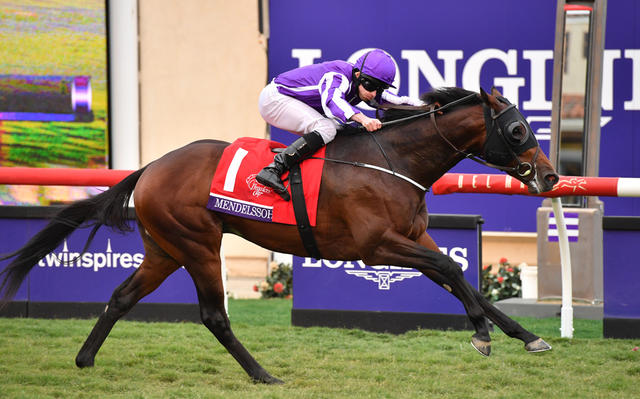