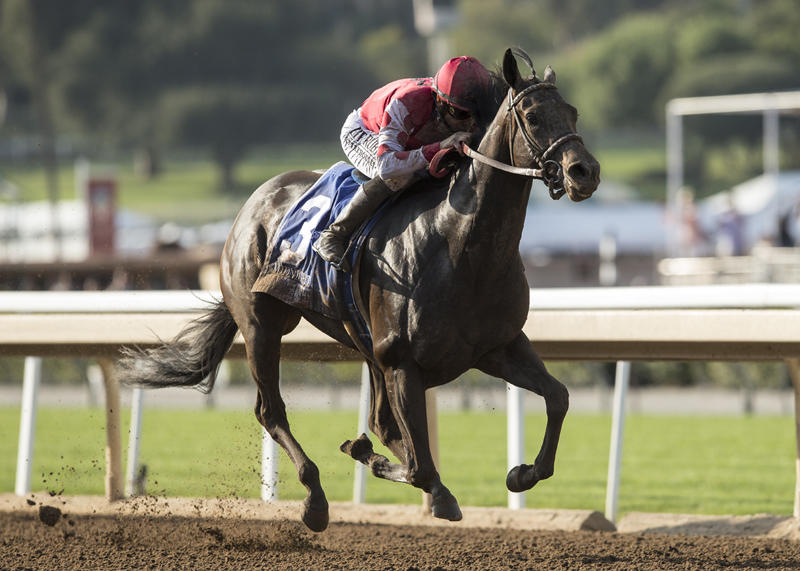 By collecting the 100 points toward the Kentucky Oaks (G1), Midnight Bisou overtook Saturday’s Ashland (G1) winner, Monomoy Girl, atop the Oaks leaderboard by a tally of 160-154. The same two were the most popular in the lone Kentucky Oaks Future Wager that ran March 9-11. Both closed at 6-1, but Midnight Bisou attracted marginally more money in the pool and ranked as the slight favorite. In the Ashland at Keeneland, Monomoy Girl threw down the gauntlet to Midnight Bisou, but her Santa Anita-based rival answered the challenge with a good-looking rebuttal.

Unlike the front-running heroics of Monomoy Girl, or Justify, Midnight Bisou employs an off-the-pace style. Smith allowed her to drop well back early as Thirteen Squared led the way through fractions of :23.47 and :47.63. But Midnight Bisou began to kick into gear entering the far turn. With a dynamic circling move, she passed most of the field despite covering extra ground on the bend, and by the time they straightened into the stretch, Midnight Bisou was already bearing down on the longtime leader.

The favorite inhaled Thirteen Squared and maintained her momentum all the way to the line, galloping to a 3 1/2-length decision. Under confident handling by Smith, Midnight Bisou was just kept to task by a hand ride and completed 1 1/16 miles in 1:44.79.

“She’s special, I’m telling you,” Smith said. “Although she was probably a little farther back than anyone expected, it was almost…I’m not going to compare it to riding Zenyatta, but I used to be way back there and I wasn’t worried because I knew that she could catch them. She gives me that great turn of foot, and I want to give her something to run at or she’ll put the air brakes on.

“I was very fortunate today,” he added regarding his Santa Anita Derby and Oaks double. “I just put the weight on those two (Justify and Midnight Bisou) – there wasn’t a whole lot of riding.”

Trainer Bill Spawr, on the other hand, was worried about Midnight Bisou’s chances. She’d ideally want a stronger pace to set up her late kick. Spawr saw the moderate fractions posted by Thirteen Squared and feared that his filly had too much ground to make up in the circumstances.

“My blood pressure is just heightened,” Spawr said. “I said up there I wasn’t sure because they were going so slow I didn’t think she could close. It’s awesome. She has just improved so much and I want to give all of the owners the credit. It just takes so much patience. She has kept surprising us all.”

“I think she is (the best filly in the country). I know this much, she’s a good one.

“Mike looked like he was very comfortable with her where he was and when he started asking her, I could see that she started motoring and I felt pretty good.

“I don’t even know how I feel about the Kentucky Oaks because you don’t think of it that way until you do. But now it’s a reality and I’m living it, enjoying it and pinching myself constantly.”

Spectator rallied for second, good for 40 Oaks points if the non-nominated filly is made eligible. Her connections, Rick and Sharon Waller and trainer Phil D’Amato, can add her for $1,500 during the late nomination stage that closes April 14. After that deadline, supplemental nominations can be made up to entry time, but at a heftier cost of $30,000 – plus the fees to enter and start.

Thirteen Squared reported home a further 3 1/2 lengths back. With her 20 points for finishing third, she now has a total of 41, putting her 12th on the Oaks leaderboard. There was a seven-length gap to fourth-placer Exuberance, who earned 10 points to bump her total to 15. At 20th in the standings, she’d need defections to draw into a 14-horse field for the Oaks.

Midnight Bisou’s only losses have come in photo-finishes to Dream Tree, once a leading Oaks hope before being sidelined. Just beaten a nose in their mutual debut, and in the Desi Arnaz at Del Mar, Midnight Bisou has won three straight by a combined margin of more than 10 lengths. She broke her maiden in the seven-furlong Santa Ynez (G2), successfully stretched out to two turns in the Santa Ysabel (G3), and made it a hat trick in the Santa Anita Oaks. 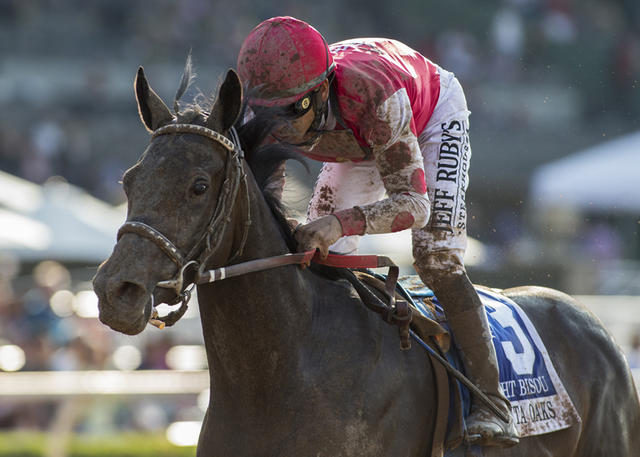