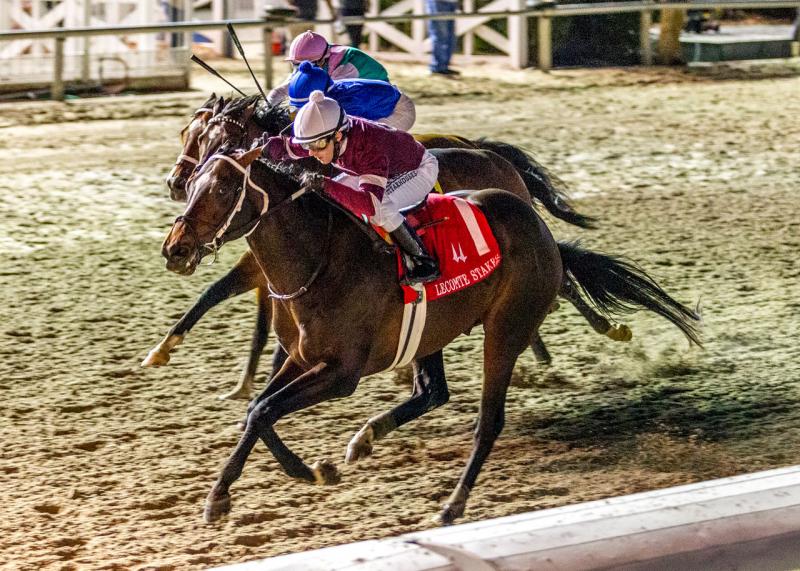 Saturday’s $400,000 Risen Star S. (G2) at Fair Grounds is the first 2021 Kentucky Derby (G1) scoring race worth 50 points to the winner. Midnight Bourbon, who opened the New Orleans road to the Derby by wiring the Jan. 16 Lecomte (G3), will renew rivalry with his nearest pursuers from that prep, while grappling with major new challengers including Senor Buscador and Carillo.

The Steve Asmussen-trained Midnight Bourbon had placed in the Iroquois (G3) and Champagne (G1) as a juvenile. But the son of Tiznow promised to be better around a route at three, and so it proved in the 1 1/16-mile Lecomte. Midnight Bourbon controlled the pace on the rail and held sway from a game Proxy and 4-5 favorite Mandaloun. Drawn in post 6 Saturday, Midnight Bourbon hopes to emulate half-brother Girvin who won the Risen Star and Louisiana Derby (G2) in 2017.
The respective second through fourth in the Lecomte have a case to do better in the rematch. Godolphin’s Proxy, a son of Tapit and multiple Grade 1 star Panty Raid, could appreciate the added ground in the 1 1/8-mile Risen Star. Juddmonte’s Mandaloun, by leading sire Into Mischief, aims to turn the tables by adding blinkers for trainer Brad Cox. Santa Cruiser did well to get up for fourth after trouble at the Lecomte start, and a smoother beginning could put him in the early mix.
The Risen Star is a deeper race, though, than the Lecomte. Kentucky Jockey Club (G2) winner Keepmeinmind would have set the standard on form, having previously placed to champion Essential Quality in the Breeders’ Futurity (G1) and Breeders’ Cup Juvenile (G1). But trainer Robertino Diodoro has decided to stay home at Oaklawn Park for the Southwest S. (G3) (which has since been postponed to Feb. 20 due to adverse weather).
Senor Buscador brings a 2-for-2 record from Remington Park, where he stretched out from a 5 1/2-furlong maiden to crush the Dec. 18 Springboard Mile. The Mineshaft colt has produced monster runs from last in both races, and the long Fair Grounds stretch gives him plenty of room. Yet the Todd Fincher pupil might have to get off to a better start at this level of competition.
Another intriguing newcomer to Fair Grounds is Carillo. Formerly with Chad Brown, the son of Union Rags won well in his Jan. 8 premiere at Aqueduct. Soon after, he was offered as part of the late Paul Pompa’s dispersal at Keeneland, and the promising colt sold for $875,000. His new ownership group, including Joel Politi who campaigned 2019 Kentucky Oaks (G1) winner Serengeti Empress, transferred him to trainer Tom Amoss. Carillo is wasting no time trying to establish himself on the Derby trail, making both his stakes and two-turn debut in the Risen Star.
Amoss also has Defeater, a fellow Union Rags colt who upstaged a well-regarded Godolphin pair in his career bow here Jan. 2. But he is expected to scratch in favor of Saturday’s 8TH race, a 1 1/6-mile allowance, according to Daily Racing Form.
Dallas Stewart sends out the unbeaten Starrininmydreams, by 2010 Kentucky Derby hero Super Saver. A debut winner sprinting at Churchill Downs, Starrininmydreams captured a two-turn allowance beneath the Twin Spires Nov. 22.
Rightandjust comes off back-to-back romps at Fair Grounds, both in wire-to-wire fashion at 1 1/16 miles. The well-bred son of Awesome Again was claimed for $50,000 out of his maiden score, but passed his class test in his allowance debut for trainer Shane Wilson. Finishing fourth in that same allowance was Beep Beep, who had scored first out at Churchill.
O Besos has won his last pair over the track, but in sprints. Both of Sermononthemount’s wins have come at Delta Downs, and he was only sixth in the Dec. 19 Sugar Bowl here.
Worth points to the top four finishers on a 50-20-10-5 basis, the Risen Star is the 13TH and final race on the card with a post time of 7:18 p.m. (ET). 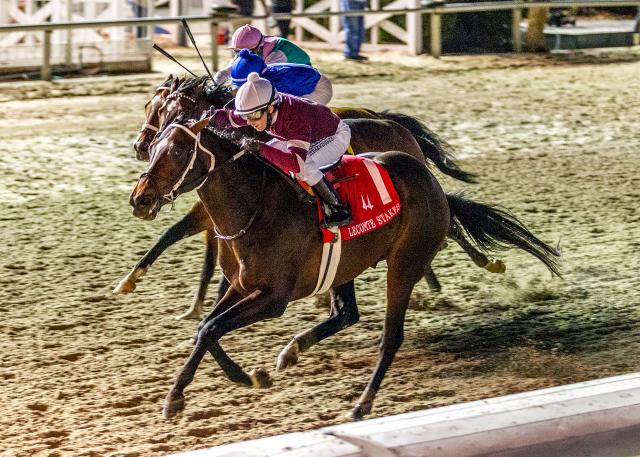