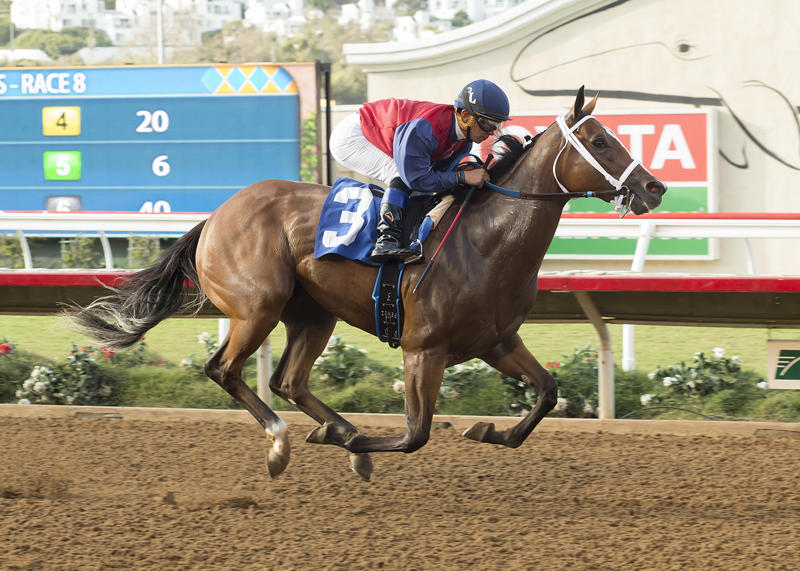 This week’s juvenile filly review is headlined by a pair of stakes winners in MISS SUNSET and HALONA. While the former earned her black-type credit at Del Mar, Halona got hers at Belterra Park.

Miss Sunset hooked up with I’ll Be Around from the very beginning of the six-furlong Generous Portion Stakes at Del Mar on August 27, loping along under a hold from jockey Fernando Perez while saving ground on the rail. The Into Mischief filly slid up to take over on the backstretch and held firm control upon hitting the stretch.

Perez showed Miss Sunset the whip once when How About Zero rallied rounding the turn, and the bay lass took off to win under wraps for trainer Jeff Bonde, who commented he didn’t think “she has distance limitations.”

The September 3 Del Mar Debutante Stakes (G1) is obviously coming up too soon for the California-bred lass, but she could test a distance of ground if Bonde opts to send her to Santa Anita Park’s Chandelier Stakes (G1) going 1 1/16 miles on October 1.

Miss Sunset is now two-for-two after taking her July 30 debut at Del Mar by 4 3/4 lengths, and earned a 90 BRIS Speed rating for her 5 1/4-length score in the Generous Portion.

Halona didn’t have quite as easy a time of it in the Tah Dah Stakes at Belterra Park as Miss Sunset did in the Generous Portion.

The Tim Girten-trained chestnut filly led the way all the way home under jockey Ricardo Feliciano. She held firm sway under a hand ride on the backstretch but blew the turn. The Parading filly carried Someday Soon, who was rallying on the outside, wide with her and True Cinder took full advantage of the wide open rail to threaten as well.

Feliciano was forced to get to work on Halona and the Ohio-bred miss responded to win by three parts of a length. She actually broke her maiden in the six-furlong affair and drastically improved her BRIS Speed rating to 92 when compared with her three prior tries.

While the stakes action is heating up this time of year, there are still good fillies breaking their maidens in, well, maidens.

Case in point, LIFE’S BLESSINGS, who made her racing debut one race after the Generous Portion on August 27.

The Bob Baffert trainee broke from the 2 post against nine rivals and took up a ground-saving spot on the rail in the 5 1/2-furlong maiden special weight.

Jockey Flavien Prat let the gray miss settle into stride and she ranged up on her own to track the pace right behind the leaders. Life’s Blessings split rivals rounding the turn and took over, continuing to draw off under urging to be 4 1/4 lengths clear on the wire.

Life’s Blessings, who was awarded an 88 BRIS Speed rating for her first race, is out of dual champion Indian Blessing. That mare also got a late start to her juvenile campaign, making her debut on August 30, 2007, at Saratoga. She would stretch out to add the Frizette Stakes (G1) and Breeders’ Cup Juvenile Fillies (G1) to her resume, and was honored with an Eclipse Award as the 2007 champion two-year-old filly.

Life’s Blessings still needs to face stakes rivals, but the daughter of Tapit could earn her shot at Breeders’ Cup glory in Santa Anita’s Chandelier, which is a “Win & You’re In” race for this year’s Juvenile Fillies.

VERTICAL OAK would be a good candidate for this year’s Frizette Stakes at Belmont Park on October 8. The Steven Asmussen-trained filly broke her maiden in her second start by 6 3/4 lengths on August 21 at Saratoga.

Vertical Oak took up a pressing spot from the 9 post down the backstretch under Ricardo Santana Jr. She drew even with the pacesetter rounding the turn and battled that one into submission in the lane, pulling off to score in her second attempt and first on dirt.

The Giant Oak miss made her debut on the turf at Saratoga and wound up fourth by 1 3/4 lengths. Her connections might want to consider leaving her on the main track after this performance, though, especially in view of the 98 BRIS Speed rating she earned in her first try on dirt.

Like the Chandelier, the Frizette is a “Win & You’re In” contest for the Breeders’ Cup Juvenile Fillies at Santa Anita Park on November 5.

Another excellent prospect for the Frizette would be INGRID, who romped by six lengths in her debut at Saratoga on August 24.

The New York-bred miss exploded to the lead when the gates opened and cantered home under a hand ride from jockey Chris DeCarlo. The Gemologist filly was never challenged at any point and did it all under her own power for an 87 BRIS Speed rating, which probably would have been higher if she had expended any kind of effort.

If Ingrid continues on as she began, it would be a very nice present for trainer Mike Hushion. In January 2015, the horseman received a shocking diagnosis of acute promyelocytic leukemia when going in for, what he thought, was just a routine physical exam.

After months sidelined while undergoing chemotherapy and recovering from infections, Hushion returned to training and can now count Ingrid among the top-class horses in his shedrow. And the filly is a top-class runner not only in her own right but also as a half-sister to both Grade 1 winner Sean Avery and the dam of multiple Grade 2 heroine Pretty N Cool.

Finally, wrapping up this week’s juvenile filly review is BITZKA, who took her initial start in easy fashion against maiden claiming rivals. The Tiago filly was claimed out of the 5 1/2-furlong race, which she captured by 4 1/4 lengths under Chantal Sutherland, by trainer John Sadler and Hronis Racing.

Sadler and Hronis Racing are no strangers to teaming up with classy runners. Just one who comes to mind is Iotapa, who went on to be a multiple Grade 1-winning millionaire after being claimed out her first race. 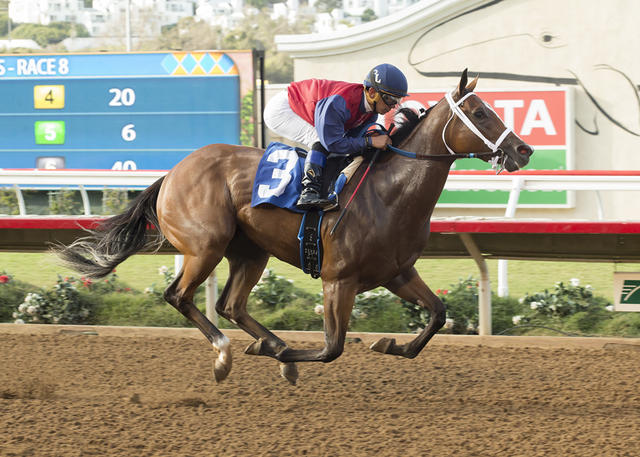