Kentucky Oaks (G1) star Monomoy Girl finally had her winning streak snapped in Saturday’s $1 million Cotillion (G1) at Parx Racing, but it took a stewards’ ruling to reverse the result on the racetrack. After staving off Midnight Bisou by a neck, the 1-2 favorite was judged culpable for interfering with her rival and demoted to second.

Still, the Cotillion revealed the strength of the 2018 Kentucky Oaks, with the top three finishers having filled the trifecta back at Churchill Downs on the first Friday in May. Midnight Bisou had placed third behind Monomoy Girl and Wonder Gadot that day; more than four months later at Parx, Midnight Bisou was awarded the victory over Monomoy Girl, with Wonder Gadot now well adrift in third.

Transferred to Hall of Fame trainer Steve Asmussen after the Oaks, Midnight Bisou retained her partnership with Hall of Fame rider Mike Smith. She rebounded with a six-length romp in the June 30 Mother Goose (G2), but played second fiddle to Monomoy Girl in the July 22 Coaching Club American Oaks (G1), and appeared not to stay 1 1/4 miles when third to Eskimo Kisses in the August 18 Alabama (G1). Shortening up to 1 1/16 miles in the Cotillion suited Midnight Bisou well, helping her bridge the gap with Monomoy Girl.

The odds-on favorite brought a stellar 8-for-9 career record, and she had been unbeaten this season. Monomoy Girl’s sequence of wins spanning the Rachel Alexandra (G2), Ashland (G1), Kentucky Oaks, Acorn (G1) and Coaching Club American Oaks likely assured her of an Eclipse Award as champion three-year-old filly, and her official loss in the Cotillion, to a rival she’d dismissed twice before, shouldn’t affect her support among the voters.

Monomoy Girl wasn’t quick into stride, but she smoothly moved up to attend the pace on the inside. Regular pilot Florent Geroux, sensing the slow tempo, made his move leaving the backstretch in an attempt to put the race away. Nearly all were caught flat-footed by the maneuver as Monomoy Girl spurted clear turning for home.

Monomoy Girl was gutsy to hang on in a final time of 1:45.95, but her waywardness hampered Midnight Bisou. Smith lodged a claim of foul, the stewards took time to review multi-angle replays, and the order of finish was reversed.

Bloom Racing Stable, Madaket Stables, and Allen Racing’s Midnight Bisou was named the winner of her second Grade 1, following the April 7 Santa Anita Oaks (G1) for original trainer Bill Spawr. Earlier in the season she also captured the Santa Ynez (G2) and Santa Ysabel (G3). Never off the board, she sports a record of 10-5-3-2, and the Cotillion made her a millionaire with earnings of $1,385,000.

The Cotillion disqualification will add a fresh story line going into the Breeders’ Cup: Will Monomoy Girl gain compensation in the Distaff (G1) November 3 at Churchill Downs? 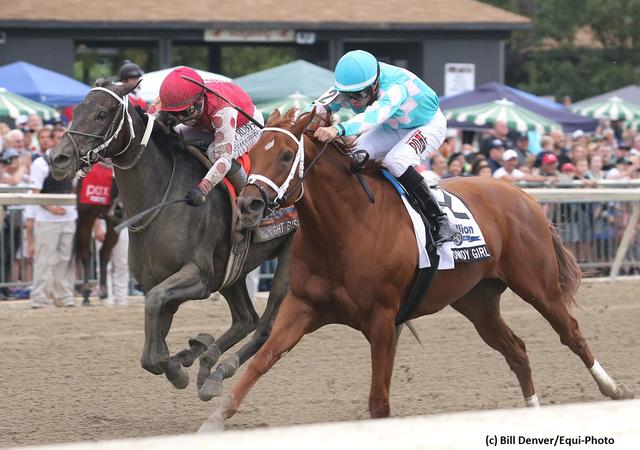