Michael Lund Peterson’s Mor Spirit edged past a pair of rivals in midstretch and won going away by 1 ½ lengths in Saturday’s $150,345 Robert B. Lewis (G3) at Santa Anita, confirming himself as a top Kentucky Derby contender on the West Coast for Bob Baffert.

The Pennsylvania-bred son of Eskendreya moved to second on the Kentucky Derby leaderboard in the qualifying race, increasing his total to 24 with the 10-point prize. Mor Spirit was exiting a victory in the Los Alamitos Futurity (G1) in mid-December and finished second in the Kentucky Jockey Club (G2) at Churchill Downs two starts previously.

With Gary Stevens up, Mor Spirit stalked front-runners I Will Score and Uncle Lino through opening splits of :23.49, :47.78 and 1:12.34. He ranged up three wide entering the stretch drive and responded when called upon about a furlong from the wire, asserting his superiority late as he completed 1 1/16 miles in 1:43.21.

Baffert moved into a tie for second when capturing his fourth Kentucky Derby with American Pharoah last year, two behind all-time leader Ben Jones. The Hall of Fame conditioner leads all trainers with a total of 12 Triple Crown wins. Stevens, a Hall of Fame jockey, is a three-time Kentucky Derby winner.

“I never had any concerns. I actually got there quicker than I wanted to,” Stevens said of his trip. “I was loaded going into the stretch. He’s pretty special and I’m looking forward to facing more competition.

“He wasn’t even blowing after the race. I haven’t been able to get him tired in the morning yet. Every time we step forward I hope I can find the bottom…but I don’t want to find the bottom of him until it’s time. I haven’t got close to that yet and that’s a good feeling. He seems to just do just enough for what’s in front of him; he likes a target. I think as he faces better horses, he’ll only get better.”

Uncle Lino wound up second, a half-length better than I Will Score in third. It was another 5 ¾ lengths back to Dressed in Hermes in fourth, and Let’s Meet in Rio and Path of David completed the order of finish. Laoban was scratched.

“He has that long stride, but in the mornings, he’s not a very good work horse. He’s sort of lazy. He needs a target and when he gets a target, he shuts it down, but today was perfect. They were two really nice horses (Uncle Lino and I Will Score). There’s a lot of quality. It makes the race even more interesting in that he’s able to collar those horses.”

Baffert said he will keep his options open regarding Mor Spirit’s next start. The ridgling is out of multiple stakes-winning Dixie Union mare Im a Dixie Girl and hails from the same female family of 2015 champion 3-year-old filly Stellar Wind.

Bred by Elkstone Group LLC, Mor Spirit was purchased by his connections for 650,000 at the 2015 Fasig-Tipton Florida March 2-year-old sale. 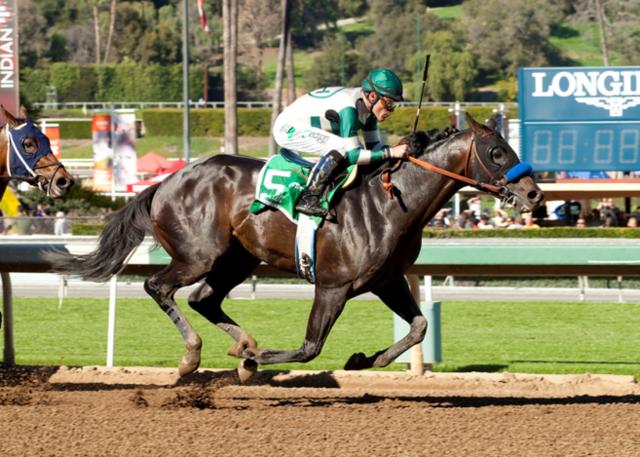