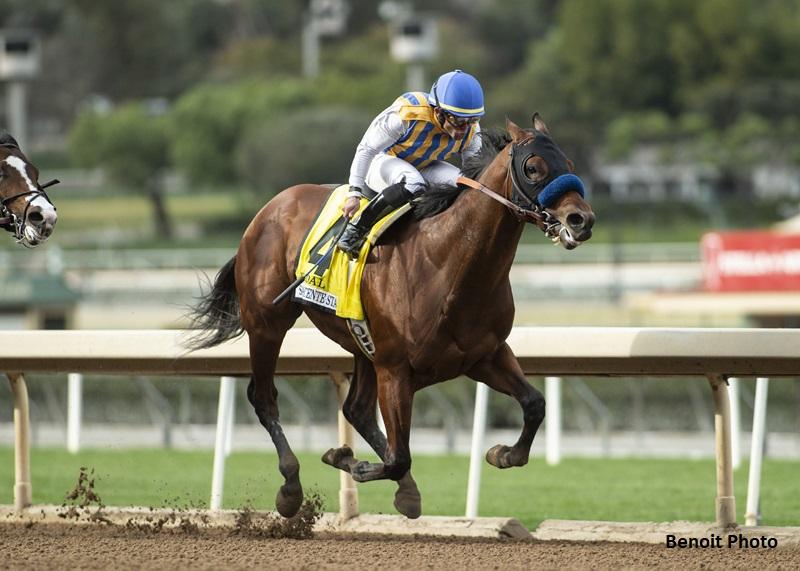 Named for the great tennis player Rafael Nadal, winner of 19 grand slam titles, the equine Nadal already had a big reputation before setting foot on the racetrack. The Bob Baffert trainee added to the buzz with a sharp debut win Jan. 19 at Santa Anita, and the hot Kentucky Derby (G1) hopeful passed a sterner test in Sunday’s $200,500 San Vicente (G2).

Bettors were so enamored of his sprint maiden score that they not only bet Nadal down to 3-10 favoritism in the San Vicente, but also hammered him into 8-1 in Pool 2 of the Kentucky Derby Future Wager that closed Sunday at 6 p.m. (ET) – before he even ran in the Santa Anita feature. The only other individual horse in Pool 2 at 8-1, Tiz the Law, has already won the Champagne (G1) and Holy Bull (G3).

Although the 7-furlong San Vicente is not a scoring race, Baffert believed that it was Nadal’s best springboard to the March 14 Rebel (G2) at Oaklawn Park. The Hall of Fame horseman had won the San Vicente nine times, including with 1997 Triple Crown near-misser Silver Charm, and Nadal gave him number 10.

But favorite backers had a few anxious moments. Those didn’t come from Breeders’ Cup Juvenile (G1) champion Storm the Court, who was using the San Vicente as a tightener. Quick into stride, the 3-1 second choice was soon beaten for raw speed, settled into a chasing role a couple of lengths back, and got no closer.

Instead, it was the 12-1 Ginobili who served it up to Nadal as they matched strides through fast fractions of :21.81 and :44.09. Ginobili appeared to be in the better tactical position on the outside, and his head was in front in midstretch.

Like his namesake, however, Nadal showed an implacable will to win. He finally outdueled Ginobili inside the final furlong, in a war of attrition that took 13.54 seconds, and edged away by three-quarters of a length. Ridden for the first time by Joel Rosario, Nadal stopped the timer in 1:22.59.

“Today, I told Joel, don’t get cute, just go,” Baffert said. “We can rate him some other day. They took it to him, but if we’re gonna get beat, get beat. I trained him light for this, so this is my serious work…I thought he was gonna get beat. He got to gut it out today, so he’s got a good foundation now. This should set him up pretty good and I think we’ll go to the Rebel.”

Rosario felt more confident in the saddle than Baffert did from his observation post.

“He broke sharp and he handled the pressure from the outside,” Rosario said. “I was never worried about it. My horse was moving very well and I was confident because I could feel I had a lot of horse under me. He was very impressive. He ran very fast today and he runs like he’ll like two turns, but you never know until they do it.”

Ginobili’s trainer, Richard Baltas, saw it as Baffert did.

“At the quarter pole, I thought I might get him,” Baltas said. “We’ve got a nice colt; I just don’t think he wants to go very far. He ran great and I’m very proud of him.”

The 14-1 Fast Enough, winner of the 1 1/16-mile Cal Cup Derby off a protracted layoff, bested Storm the Court by a neck in third. Storm the Court was going best of all on the gallop-out, befitting one wanting to stretch back out in trip. The remaining two, Nadal’s stablemate Ra’ad and Party Town, finished at long intervals.

Nadal is by Blame, who thwarted Zenyatta in the 2010 Breeders’ Cup Classic (G1), and out of the Pulpit mare Ascending Angel. This is the immediate family of champion Pleasant Stage, heroine of the 1991 Breeders’ Cup Juvenile Fillies (G1), and Marsh Side, the 2008 Canadian International (G1) winner.

Bred by Sierra Farm in Kentucky, Nadal first sold for $65,000 as a Keeneland September yearling but commanded $700,000 as a 2-year-old in training at Fasig-Tipton’s Gulfstream Sale. He’s earned $153,000 from his two starts so far, with the prospect of much more to come for owners George Bolton, Arthur Hoyeau, Barry Lipman, and Mark Mathiesen. 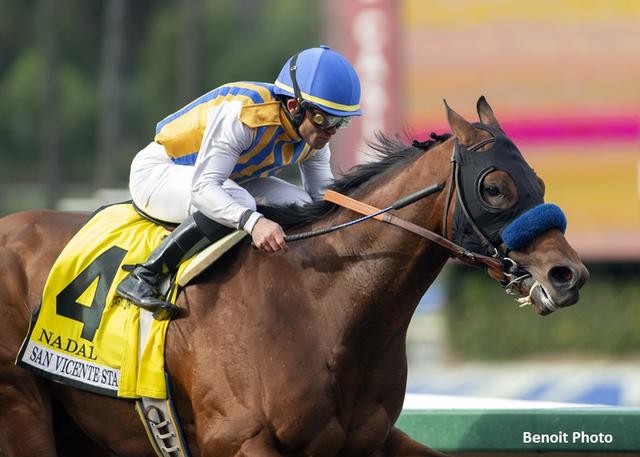