Newgrange leads all the way in Sham

The Road to the Kentucky Derby series qualifier was worth a combined 17 points to the top four finishers (10-4-2-1 scale), but Newgrange isn’t eligible to earn points from the Bob Baffert shedrow.

After showing the way on a short lead, the son of Violence began to edge away nearing the conclusion of the far turn. Newgrange rolled home unopposed, completing the mile distance in 1:38.32 with John Velazquez.

“There was one speed, the other Bob Baffert horse (Rockefeller), and I’m pretty sure he didn’t want them in a head and head,” Velazquez said. “He told me to put my horse on the lead. Once my horse got to the lead, he waited. I took a little hold of him and he kind of started waiting for the horses, so I started waiting for the horses to come to him, by the time we got to the backside I kind of let him do his own thing. I let him get in a comfortable rhythm, after that it was pretty easy though.”

Rockefeller, the 3-2 favorite following a victory in the Nov. 7 Nashua (G3) at Belmont Park, held second by a nose after tracking the pacesetter during the opening stages. Grade 1-placed Oviatt Class, fifth in the Breeders’ Cup Juvenile (G1) closed from last to just miss second. Mackinnon and Degree of Risk completed the order.

Newgrange, a comfortable debut maiden winner over six furlongs at Del Mar in late November, stretched out to two turns with aplomb.

“He looked good,” Baffert said. “He had been training really well and working together with Rockefeller. The quality is there. I’m happy we have a great team and we are moving forward with him.”

Bred in Kentucky by Jack Mandato and Black Rock Thoroughbreds, Newgrange commanded a $125,000 sales tag at the 2020 Keeneland September yearling sale. The dark bay colt is out of the Empire Maker mare Bella Chianti, a daughter of Grade 2 queen Bella Chiarra. 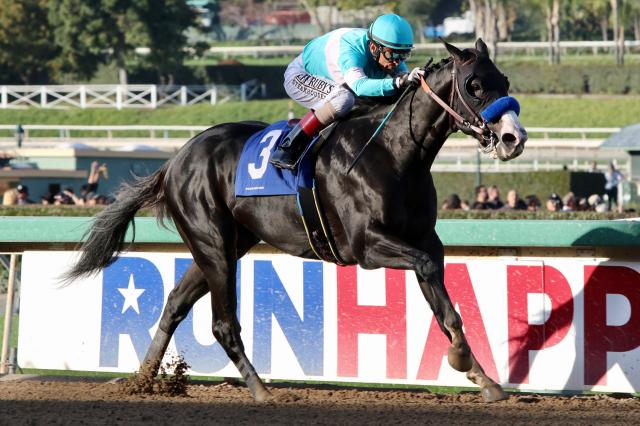