Not This Time overcomes poor start to romp in Iroquois

Had Albaugh Family Stable’s homebred Not This Time lost Saturday’s $150,000 Iroquois (G3) at Churchill Downs, the 9-5 favorite would have had a proper excuse.

Not This Time was the last to break after taking a hop at the start, and for a horse who’d broken his maiden in wire-to-wire fashion at Ellis Park, he was in an unpromising position. But in the manner of a budding star, the Dale Romans trainee simply went to Plan B, bided his time off the pace, and trounced them down the stretch.

Drawing off by 8 3/4 lengths, Not This Time resoundingly captured the first points race on the 2017 Road to the Kentucky Derby (G1). In addition to his 10 Derby points, he earned a spot in the November 5 in the Breeders’ Cup Juvenile (G1) at Santa Anita.

Jockey Robby Albarado did his part through his patient handling of the talented colt. Instead of panicking once he flubbed the break, and rushing up, Albarado gave Not This Time all the time he needed to regroup and settle into stride. That meant he was racing several lengths off a slow pace, and enduring a wide trip, but none of it mattered.

“He’s the real deal,” said Romans, who added that Not This Time may be right up there with turf champion Kitten’s Joy as the best he’s ever trained.

“He’s spooky good and I think he’s everything I’ve always thought he was. He’s just so talented. That (slow break) wasn’t going to get him beat.

“Robby (Albarado) rode him well. He just sat outside. I usually say to stay inside and eat them if you have to in order to save ground, but when I think I have tons the best I tell them to keep them in the clear and keep them in a nice, long gallop and just try to overtake them and that’s what he did.”

“He hopped at the gate,” Albarado recapped. “Dale gave me confidence to just kind of ride my own race and get him in a nice, cruising stride. He took a little dirt which schooled him a bit today, but he ran well.

“In his first race he broke slow and rushed up in the race, made a move, he was very green (when fifth in a June 30 maiden at Churchill). I didn’t beat on him too much. It was a tough race that day and the winner (Bitumen) ended up winning a stakes at Saratoga (the July 23 Sanford [G3]).

“He’s a nice horse, man. He’s got a future,” summed up Albarado, who noted that Not This Time rates in the top five of horses he’s ridden.

As a son of world renowned sire Giant’s Causeway, and a half-brother to last year’s Breeders’ Cup Dirt Mile (G1) and Woodward (G1) hero Liam’s Map, Not This Time has every right to keep developing – and be even better in time. Romans indicated that he’ll likely train up to the Breeders’ Cup.

Also earning Derby points in the Iroquois were runner-up Lookin at Lee (4 points), who caught Recruiting Ready (2 points) by a head at the wire. Honor Thy Father scored one point for finishing fourth. 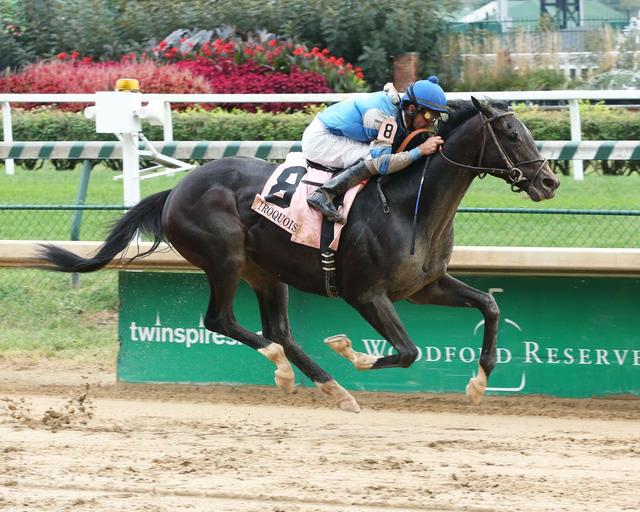