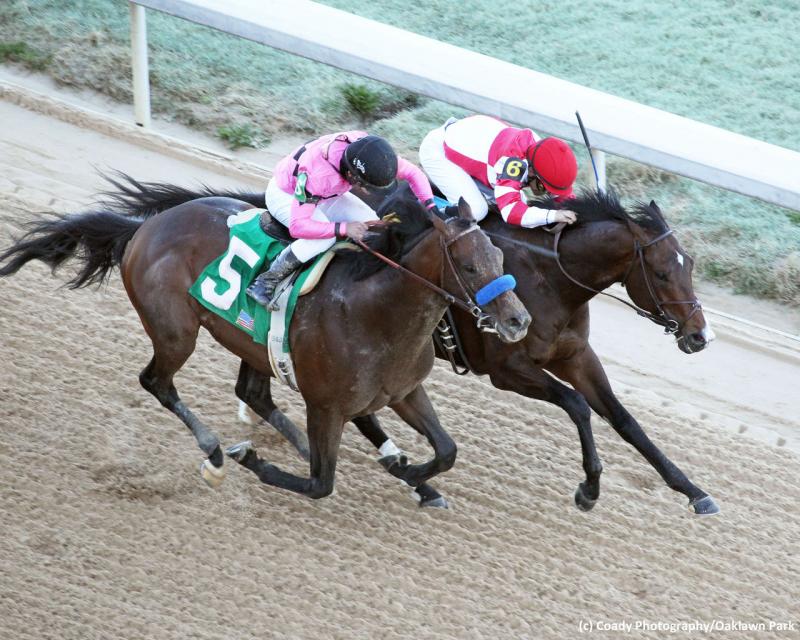 About an hour after Bob Baffert’s Improbable was just denied in the first division, champion stablemate Game Winner likewise lost his perfect record in the second division of Saturday’s $750,000 Rebel S. (G2). Game Winner rallied down the stretch, but 4-1 second choice Omaha Beach dug in courageously and held off the previously unbeaten 1-2 favorite in a thriller.

Owned by Rick Porter’s Fox Hill Farm and trained by Hall of Famer Richard Mandella, Omaha Beach was making his stakes debut following a nine-length maiden romp at Santa Anita. But he was not lacking in racing experience, having placed in his first three starts on turf, and missed narrowly to Nolo Contesto in his first dirt try.

That turf-to-dirt pattern is reminiscent of current Road to the Kentucky Derby points leader War of Will. And there’s a good reason for it, since Omaha Beach is by the same sire – War Front.

Meanwhile, Game Winner was coming under pressure in pursuit. Considering the Eclipse Award champion has a grinding, workmanlike style anyway, and hadn’t raced since the November 2 Breeders’ Cup Juvenile (G1), it was no surprise. Game Winner responded in his usual fashion, and for a few strides in deep stretch, he appeared ready to snatch victory at the wire, much like Long Range Toddy mugged Improbable.

But Omaha Beach, who had traveled beautifully throughout, had more left. Persevering to the end, he made it all the more difficult for Game Winner to pass, try though he might to claw back the yardage. The margin was a desperate nose, and Omaha Beach’s time for the 1 1/16-mile test was 1:42.42, .07 quicker than Long Range Toddy’s 1:42.49 in the first division.

Omaha Beach earned 37.5 points toward the Kentucky Derby, in keeping with the revised points structure for a two-division Rebel. Game Winner added 15, upping his total to 45.

A further 8 1/4 lengths back in third came Market King, who outperformed his 48-1 odds and landed 7.5 Derby points. Gunmetal Gray closed for fourth to increase his points haul by 3.75 to 21.75.

Omaha Beach is a half-brother to champion Take Charge Brandi, heroine of the 2014 Breeders’ Cup Juvenile Fillies (G1); a full brother to Irish Group 1-placed Courage Under Fire; and a “nephew” of Long Range Toddy’s sire, Take Charge Indy. Omaha Beach’s dam, Charming, is a half-sister to Take Charge Indy as well as champion Will Take Charge, the 2013 Rebel winner. The half-sibling trio is out of multiple Grade 1 star, $2.4 million-earner, and Broodmare of the Year Take Charge Lady. 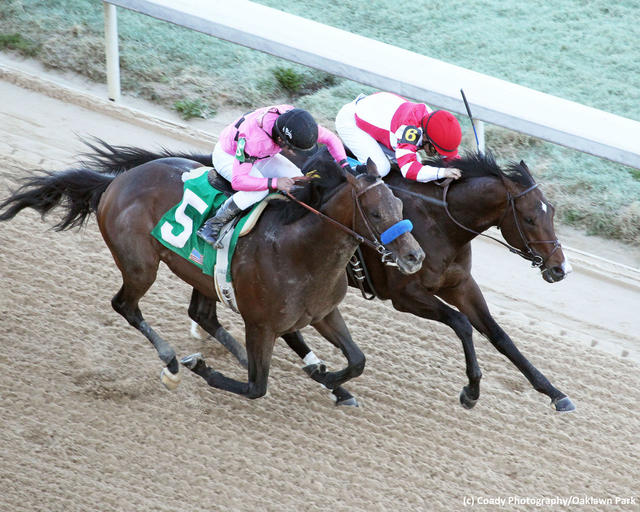