Opry bursts onto stage as versatile two-year-old to follow

With an eye-catching, last-to-first rally in the August 29 With Anticipation S. (G3) on the Saratoga turf, Opry broke his maiden in style. The Todd Pletcher juvenile was convincing enough to ponder his future, not only on turf, but on dirt.

Opry prompts the question of whether he could follow in the hoofsteps of Catholic Boy, last year’s With Anticipation winner. Catholic Boy developed into a Kentucky Derby (G1) hopeful before being sidelined, rebounded on the Belmont turf, and proved himself a dirt star when romping in the August 25 Travers (G1).

Needless to say, speculative parallels are premature, and Opry would do well to emulate any part of Catholic Boy’s resume. Still, the nicely-bred colt is only just learning the game, and his pedigree screams multi-surface threat.

Opry is from the second crop of Declaration of War, a world-class operator on turf and dirt who was also unbeaten on synthetic surfaces in Europe. By War Front and from the immediate family of 2012 Belmont S. (G1) hero and emerging sire Union Rags, Declaration of War reached the peak of his career as a four-year-old. During that 2013 campaign for trainer Aidan O’Brien, he captured the Queen Anne (G1) at Royal Ascot and Juddmonte International (G1) at York, and just missed in a three-way photo in the Breeders’ Cup Classic (G1) at Santa Anita.

Bred by Crosshaven Bloodstock in Kentucky, Opry was sold for $180,000 as a yearling at Keeneland September. He races for the partnership of Everett Dobson’s Cheyenne Stables (best known in recent years for Mastery) and Ed Gaylord’s Gaillardia Racing. Gaylord’s long connection to the Grand Ole Opry provides the background for the colt’s iconic name, and perhaps their regard for him.

Opry debuted in an August 11 Saratoga maiden that was rained off the turf. Slowest to leave the gate, he gained enough momentum on the dirt to place a close third. Opry was the last to break again in the With Anticipation, but quickened sharply over the grass to win going away.

Was his improvement due to the surface switch? Or natural progression second time out? Pletcher plans to stick to turf for the time being, but if Opry continues his upward curve, he’ll warrant another chance on dirt – maybe even on the Derby trail. 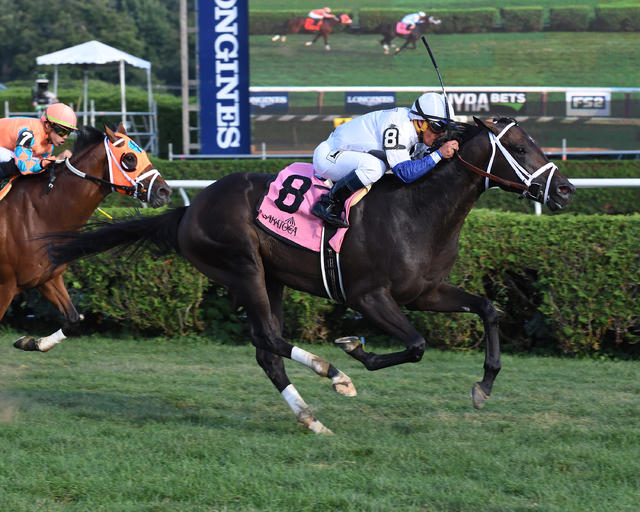