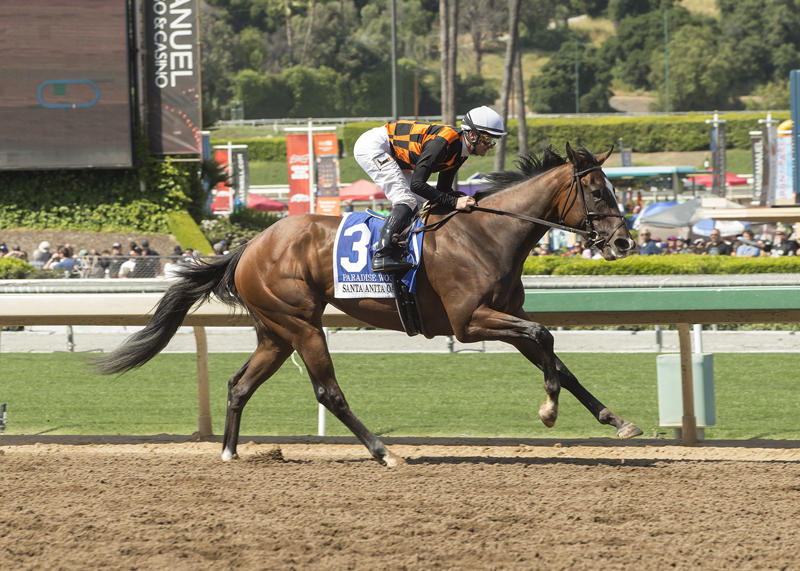 The bay filly set all the pace in the 1 1/16-mile contest over Santa Anita Park’s fast dirt, drawing off to be 11 3/4 lengths clear on the wire. That easily surpassed the previous winning-margin record of 10 1/2 lengths set by Silver Spoon in 1959.

Paradise Woods cruised under jockey Flavien Prat to stop the clock in 1:42.54, and in the process not only took home her first stakes win but 100 points toward a starting berth in the May 5 Kentucky Oaks (G1) at Churchill Downs.

The Santa Anita Oaks is part of the Road to the Kentucky Oaks series of points races and was worth 100-40-20-10 points to the respective top four finishers. Paradise Woods debuted on the Kentucky Oaks Leaderboard in position four.

Starlet Stakes (G1) winner and Santa Ysabel Stakes (G3) runner-up Abel Tasman, the 4-5 favorite in the Santa Anita Oaks, earned 40 points for second, which bumped her total to 70 and improved her Leaderboard spot from ninth to seventh.

Honeybee Stakes (G3) winner It Tiz Well, 2 1/4 lengths behind Abel Tasman in third, actually dropped from fourth on the Kentucky Oaks Leaderboard to sixth despite adding 20 points to bring her total to 74.

Mopotism, who just missed third by a nose, jumped from 26th on the Leaderboard to 17th thanks to the 10 points she added to the six earned for finishing third in last year’s Starlet and second in this season’s Las Virgenes Stakes (G2).

Paradise Woods is now 3-2-1-0, $283,200, in her career after finishing second in her January 26 debut and taking a March 11 maiden by 4 1/4 lengths. Bred in Kentucky by Herman Sarkowsky, she is out of the unraced Forest Wildcat mare Wild Forest, making her a half-sister to stakes winner Forest Chatter. Her female family includes French champion and multiple Group 1 queen Lianga; multiple Grade 3-scoring top sire Mr. Greeley; and multiple Group 1 hero and successful sire Danehill Dancer.

“I’ve always been high on her. From the first time I worked her, I said, ‘That one is really good.’ She ran well her first time out (second in a six furlong maiden special weight on January 26) but I was expecting so much more that I was almost disappointed. But I think that I was just expecting too much from her.

“The next time out, she won like a good filly. She’s so smart. If you teach her something she remembers it the next day; it sticks. She’s super small, she’s fast and she has stamina. She’s so good.

“I learned she can make the distance, no problem. It’s an honor to rider her, truly.

“Down the backside it was all her, I didn’t do anything. I just let her have her way.”

“She looked like she was just cruising out there. At the half-mile pole, she was going easy. She took my breath away. It means a lot to win for (breeder Herman) Sarkowsky. He was an owner with me for 38 years.

“I have always been high on her. I wasn’t that confident, but I fully expected her to run well. I didn’t think she would do this.

“I was thinking of running her short tomorrow in the Santa Paula, but when Unique Bella scratched, I thought we should take a shot. I thought she was as good as these fillies and she showed it today. She is a young filly.  She has only had three starts, so we’ll see about the Kentucky Oaks (G1) and how things develop.  She was really nasty to saddle today, but she ran great.”

“You know, (trainer Richard) Mandella’s horse really just blew the field away. She just broke, they call it ‘speed popin’ the field’ sometimes. She broke and was gone. I made sure we got second. There was no catching the winner. And that was good enough for today.

“We’re going to have to go back to the drawing board, make a couple of changes, tweak this and tweak that a little and see if we can turn the page in the Kentucky Oaks (G1). Today, it was all Mandella. No one was beating that horse. She’s still learning, maybe a few little things we could do that would certainly make her better. So, we’ve got room to play with. We lost the battle but the big one’s yet to come. She was just gone.”

“She was back there, and you have to be up close to the lead. I think Mike Smith got a feel for her today. Now I’ve got a race into her, and I know what I need to do to sharpen her up. She’ll move forward off that – still the Kentucky Oaks.” 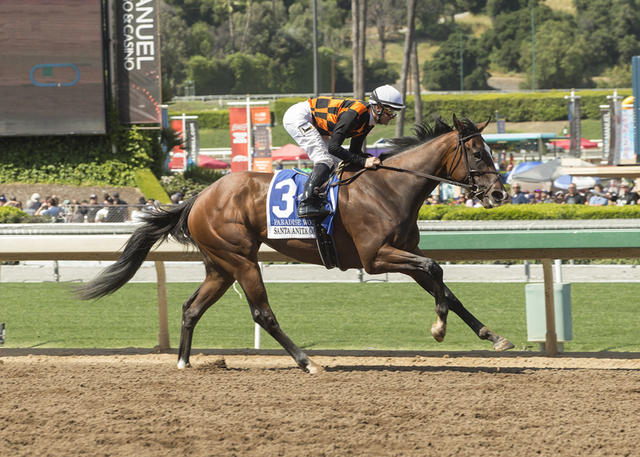