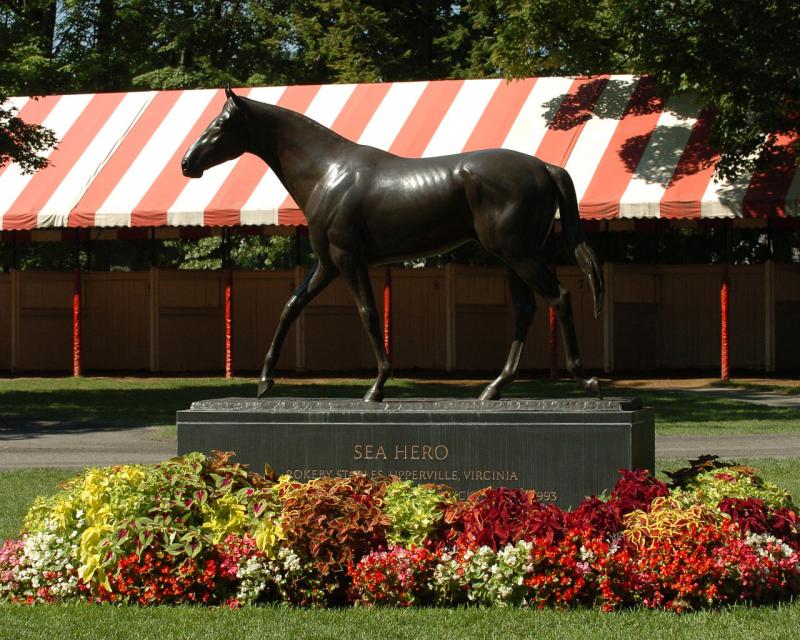 Essential Quality traces to the same ancestress as Sea Hero, the 1993 Kentucky Derby and Travers winner enshrined in bronze at Saratoga (Coglianese Photos)

Leading sire Tapit has yet to sire a Travers S. (G1) winner, but that gap on his resume can be filled at Saratoga Saturday by his champion son Essential Quality.

Tapit is the paternal grandsire of last year’s Travers star, Tiz the Law, but his own sons have settled for minor awards so far in the “Midsummer Derby.” Twice Tapit has sired a Travers runner-up, Tacitus (2019) and the less memorable Rattlesnake Bridge (2011), and two other progeny placed third, Tonalist (2014) and Frosted (2015).
Essential Quality has a stronger correlation with Travers success on his dam’s side. He traces to the blue hen *La Troienne, whose  family dubbed 1-x is responsible for five winners -- Hall of Famers Buckpasser (1966) and Easy Goer (1989) as well as Rhythm (1990), Sea Hero (1993), and Ten Most Wanted (2003).
Two Travers runners, Dynamic One and Miles D, are “cousins” from the same immediate family. Both descend from unbeaten Hall of Famer Personal Ensign, via her multiple Grade 1-winning daughter My Flag (by Easy Goer). My Flag produced champion Storm Flag Flying, the granddam of Dynamic One, and another of My Flag’s daughters, Sound the Trumpets, is the dam of well-named Miles D. Personal Ensign’s tribe owns a couple of Travers placings; her full brother Personal Flag (1986), and her son Miner’s Mark (1993), both finished third in their respective years.
Dynamic One is the lone Travers entrant representing the Northern Dancer sire line. He comes from the Dixieland Band branch, by way of Union Rags.
Miles D is one of two Travers entrants by Hall of Famer Curlin, along with King Fury. Curlin has already sired a Travers winner in Keen Ice (2015), who famously stunned Triple Crown champion American Pharoah.
Both Miles D and King Fury are bred on a similar cross of Curlin over A. P. Indy-line mares. Miles D is out of a mare by the late Bernardini, the 2006 Travers hero. Bernardini himself sired a pair of Travers winners in Stay Thirsty (2011) and Alpha (dead-heat in 2012), and he also factors as the broodmare sire of 2018 victor Catholic Boy.
King Fury is the only foal from Taris, a Grade 1-winning millionaire. Taris is by the well-bred A. P. Indy stallion Flatter, sire of 2017 Travers champ West Coast. Her matrilineal descent goes back to the family labeled 4-r, whose quartet of Travers winners virtually spans the entire history of the race, from the filly Maiden (1865) and Falsetto (1879) to Runaway Groom (1982) and V. E. Day (2014).
Travers rival Masqueparade is by Flatter’s son Upstart, who was fourth in the Keen Ice-American Pharoah Travers. Masqueparade’s pedigree sports inbreeding to A. P. Indy. Rival Midnight Bourbon is inbred to A. P. Indy’s sire, Seattle Slew, in the core of his pedigree, not via the sire line.
Midnight Bourbon hails from the male line of the legendary Man o’ War, hero of the 1920 Travers. Midnight Bourbon’s sire, Hall of Famer Tiznow, is responsible for 2008 Travers scorer Colonel John, and he is also the broodmare sire of reigning titleholder Tiz the Law.
Although Midnight Bourbon’s half-brother Girvin was only 11th in the 2017 Travers, their tail-female line has been prolific. This old American family, listed as A1, includes Travers winners The Banshee (1868), Long Dance (1889), Azra (who also won the Kentucky Derby in 1892), Rensselaer (1897), Observant (1934), Tompion (1960), Thunder Rumble (1992), Will’s Way (1996), and Unshaded (2000).
Keepmeinmind is by Uncle Mo’s son Laoban, who broke his maiden in the 2016 Jim Dandy (G2) at odds of 27-1. Regressing to 12th in the Travers, Laoban exited with an injury and retired a few months later. Keepmeinmind’s dam is a daughter of Victory Gallop, who missed by a nose in the 1998 Travers. 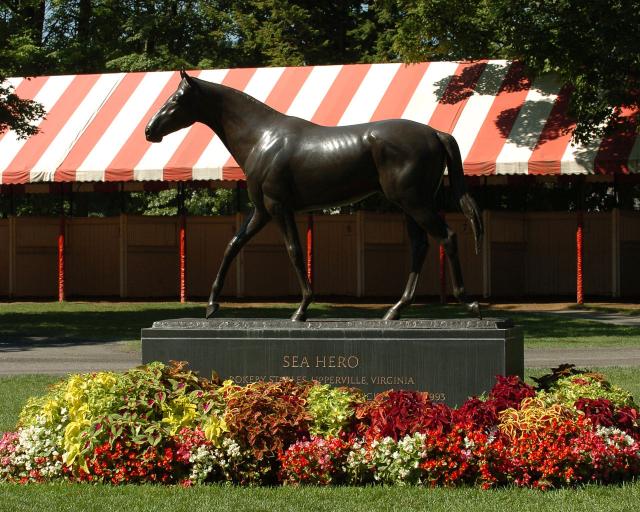