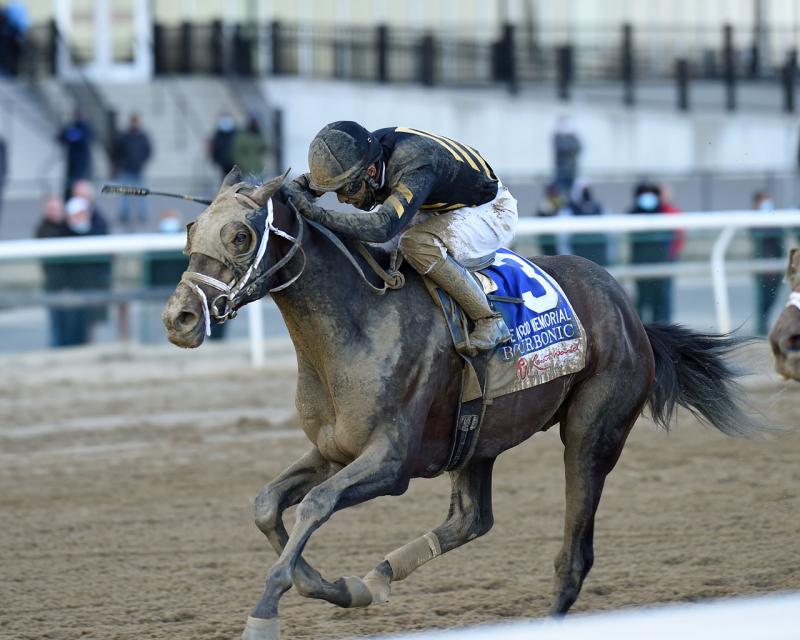 Bourbonic aims to become the fourth straight generation of his male line to win a classic. Moreover, his female line is responsible for one of the greatest horses ever to lose the Kentucky Derby (G1).

Bourbonic’s sire, champion Bernardini, captured the 2006 Preakness (G1), while his sire in turn, Hall of Famer A.P. Indy, won the 1992 Belmont (G2). A.P. Indy is the best son of the legendary Seattle Slew, who swept the Triple Crown in 1977.
Bernardini burst onto the scene a bit too late for his patient connections to push toward the Derby. The Darley homebred only broke his maiden in early March, and made his victorious stakes debut in the Withers (G3) (then contested in late April). After his tour de force in the middle jewel at Pimlico, Bernardini skipped the Belmont to freshen up for a later summer and fall campaign. He extended his winning streak to six with romps in the Jim Dandy (G2), Travers (G1), and Jockey Club Gold Cup (G1), and concluded his brief career with a second to Invasor in the Breeders’ Cup Classic (G1).
A blueblood who lived up to his pedigree, Bernardini is out of Grade 1 winner and $884,452-earner Cara Rafaela. By Fappiano’s son Quiet American (sire of 1998 Triple Crown near-misser Real Quiet), Cara Rafaela is out of a mare by another who suffered Triple Crown heartbreak in the Belmont, Hall of Famer Spectacular Bid. 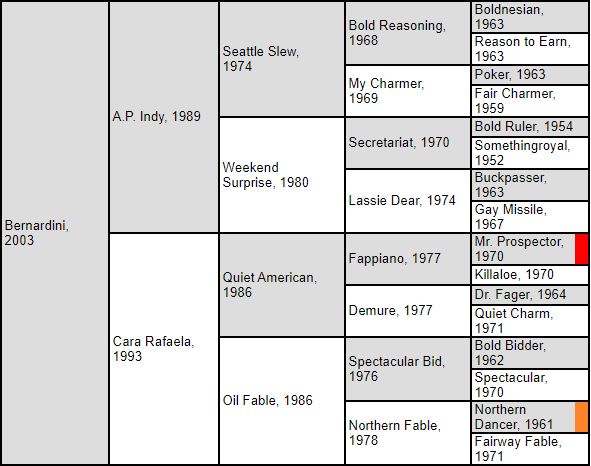 Bernardini came close to siring a Belmont winner when Stay Thirsty came up just short in 2011. Stay Thirsty went on to land the Travers and the 2012 Cigar Mile (G1). Bernardini got back-to-back Travers winners as his son Alpha dead-heated for the victory in 2012.

Other Grade 1 scorers by Bernardini include To Honor and Serve, Rachel’s Valentina (out of Hall of Famer Rachel Alexandra), and Cavorting (dam of current Kentucky Oaks [G1]) contender Clairiere). Bernardini is also emerging as a significant broodmare sire, with his daughters producing current stars Colonel Liam and Maxfield as well as 2018 Travers hero Catholic Boy and 2019 Kentucky Oaks vixen Serengeti Empress.
Bourbonic has an immediate classic connection on his dam’s side too. He is out of 2013 Delaware Oaks (G2) queen Dancing Afleet, by champion Afleet Alex, who was a length away from the Triple Crown. A close third in the Kentucky Derby, he rebounded literally in the Preakness, recovering from a terrifying heel-clipping incident entering the stretch. Afleet Alex conquered the Belmont by seven lengths in what turned out to be his final start.
As a sire, Afleet Alex is responsible for 2010 Travers scorer Afleet Express; 2014 Breeders’ Cup Juvenile (G1) upsetter Texas Red; 2015 Florida Derby (G1) victor Materiality; multiple Grade 1-winning millionaire Iotapa; Dublin, who emulated his sire by winning the 2009 Hopeful (G1); and recently crowned Canadian champion Skywire.
Afleet Alex appears as the broodmare sire of Sir Winston, the 2019 Belmont hero; Suddenbreakingnews, a good fifth to Nyquist in the 2016 Derby; the brilliant Grade 1 vixen Dream Tree; and Bourbonic’s half-brother Avant Garde, who’s placed in three straight major stakes including the March 27 Godolphin Mile (G2) on Dubai World Cup night.
Pennsylvania-bred Dancing Afleet is out of a mare by longtime Maryland patriarch Citidancer. A son of the Northern Dancer stallion Dixieland Band, Citidancer ran away with his first three starts by a combined margin of 36 lengths. He was no match for Hall of Famer Housebuster, however, when a distant second in the 1990 Jerome (G1) (then a marquee race in early fall at Belmont Park).
Citidancer sired millionaires Urbane (dam of Suave and Worldly), Park Avenue Ball, and Cherokee’s Boy, as well as the speedy Disco Rico and Hookedonthefeelin (dam of fellow Grade 1 stars Pussycat Doll and Jimmy Creed). Another daughter of Citidancer produced the top-class Midnight Lucky, whose only loss came when fifth in the 2013 Kentucky Oaks. 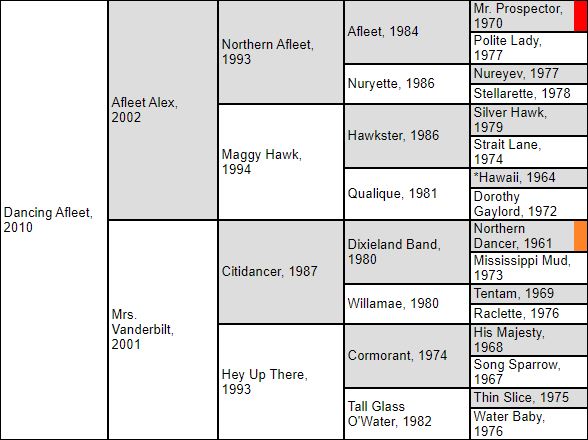 Dancing Afleet’s dam is named Mrs. Vanderbilt, a tip of the cap to the prominent family that developed her female line. Mrs. Vanderbilt is out of Hey Up There, by Cormorant, who is best known as the sire of 1994 Kentucky Derby winner Go for Gin; prolific millionaire Grecian Flight; and champion Saratoga Dew (now factoring in pedigrees through her outstanding grandson, Japanese Horse of the Year and top sire Lord Kanaloa).

Hey Up There’s dam, Tall Glass O’Water, scored in the 1985 Yaddo H. for New York-breds. The Alfred G. Vanderbilt homebred was herself the product of fellow homebreds Thin Slice, an obscure son of Hall of Famer Damascus, and Water Baby.
Yet Tall Glass O’Water has an intriguing pedigree pattern. Thin Slice and Water Baby are both grandchildren of the mare Cup of Tea, who is herself out of Teahouse – a full sister to Vanderbilt’s great Native Dancer.
Teahouse was foaled in 1953, the year that her brother almost won the Triple Crown. Still unbeaten after a two-year-old season that saw him win Horse of the Year in two polls, Native Dancer was the 7-10 favorite in the Kentucky Derby. But after a checkered passage at Churchill Downs – where one famous quip had it that the jockey took him everywhere except the ladies’ room – he was denied by Dark Star.
Native Dancer never lost again, winning the Preakness and Belmont as well as the Travers and 1954 Metropolitan H. among other majors. The “Gray Ghost” also stamped his presence on the breed, siring Raise a Native (sire of Mr. Prospector, Exclusive Native, and Alydar) and Natalma, dam of supersire Northern Dancer.
Native Dancer and Teahouse’s sire, Polynesian, captured the 1945 Preakness and later reigned as champion sprinter of 1947. Their dam, Geisha, is a daughter of Hall of Famer Discovery, a superior weight-carrier who turned three-peats in both the Whitney and Brooklyn H. in 1934-36. Discovery added to his stature as an influential broodmare sire, most notably of Hall of Famer Bold Ruler in addition to Native Dancer.
Geisha’s dam, stakes scorer Miyako, is a full sister to 1938 champion two-year-old colt El Chico. They are by John P. Grier, who earned a spot in racing lore for making Man o’ War pull out extra in the 1920 Dwyer.
Miyako and El Chico are out of La Chica, by 1910 Belmont winner Sweep. A stellar broodmare sire, Sweep played that role in the pedigrees of Triple Crown champs War Admiral (1937) and Whirlaway (1941). La Chica also produced stakes victress Planetoid, herself the dam of blue hen Grey Flight, whose progeny include champion (and Broodmare of the Year) Misty Morn and noted sire What a Pleasure.
La Chica’s dam, imported *La Grisette, brought the gray coat courtesy of her sire, Roi Herode. This is the 5-f family that is still waiting for its first Derby trophy ever since Native Dancer’s near-miss. 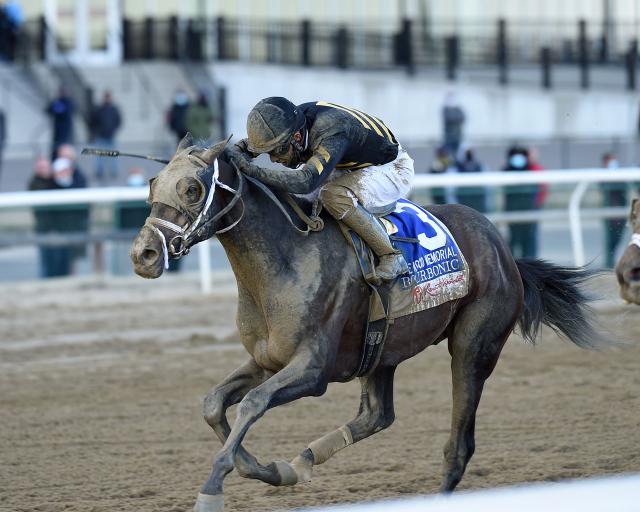