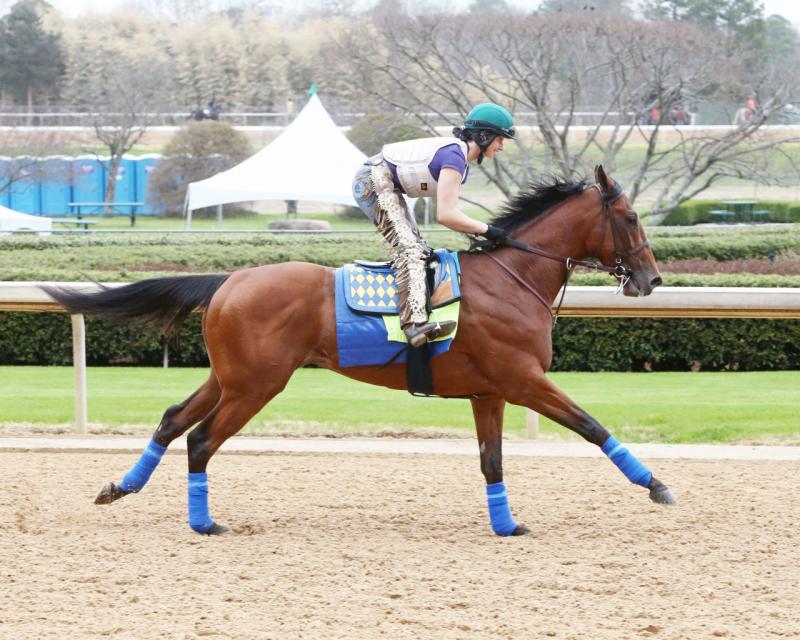 Concert Tour is bred along a pattern similar to another homebred campaigned by Gary and Mary West – champion Maximum Security, who was disqualified after crossing the wire first in the 2019 Kentucky Derby (G1).

Both are by sons of Street Cry and out of A.P. Indy-line mares, but Concert Tour’s rendition of the theme has a more pronounced classic flair than Maximum Security’s did. Concert Tour is by Street Cry’s most accomplished son, Street Sense, and out of a well-related Tapit mare. Note that fellow Derby contender Greatest Honour is bred on the reverse cross (Tapit over a Street Cry mare), so the two influential progenitors could have a significant say on the 2021 Triple Crown trail.
Street Cry, a scion of the Mr. Prospector sire line, was a prominent contender for the 2001 Kentucky Derby. Unfortunately, he was sidelined by injury in one of the cruelest blows to Godolphin’s longstanding pursuit of the Derby. The what-might-have-been grew stronger over time when Street Cry became a top performer of 2002, dominating the Dubai World Cup (G1) and Stephen Foster H. (G1).
Although Street Cry will go down in history as the sire of great racemares in both hemispheres – American celebrity Zenyatta and Australia’s queen Winx – he has had outstanding sons that illustrate his range as well. Some were Australian champions, like Whobegotyou and 2009 Melbourne Cup (G1) hero Shocking. His U.S. headliners include New Year’s Day (Maximum Security’s sire), whose career was cut short after a breakthrough victory in the 2013 Breeders’ Cup Juvenile (G1); sprinter Street Boss; and turf campaigners Victor’s Cry and Zulu Alpha (himself out of an A.P. Indy mare).
But Street Sense, as the star of the 2007 Kentucky Derby, deserves pride of place among Street Cry’s sons. The first to turn the elusive Breeders’ Cup Juvenile (G1)/Derby double, Street Sense added further historical polish in the Travers (G1). 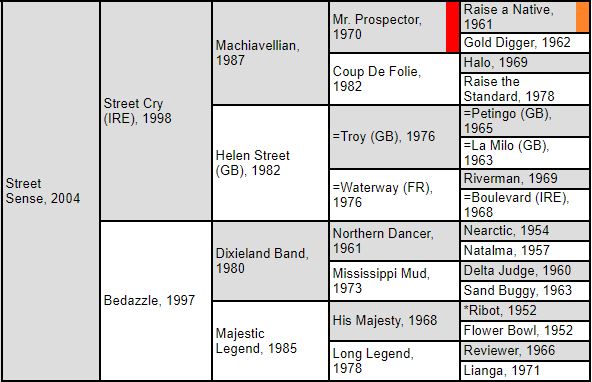 As a sire, Street Sense has come up with a couple of major Derby hopefuls who were knocked off the trail by injury in their respective years –  $3.4 million-earner McKinzie and Maxfield, unbeaten until his recent third in the Santa Anita H. (G1). Street Sense has several other Triple Crown nominees this season, in Jerome scorer Capo Kane; key maiden winner Speaker’s Corner, who is on the comeback trail for Godolphin; and the filly Zaajel, 2-for-2 after the Forward Gal (G3) and likely to enhance her Kentucky Oaks (G1) credentials.

Yet Concert Tour rates his leading hope as he stretches out in Saturday’s Rebel (G2).
Broodmare sire Tapit could bolster his distance capacity, considering his stature as the sire of a trio of Belmont (G1) winners in Tonalist (2014), Creator (2016), and Tapwrit (2017). And he’s in the forefront of the 2021 Derby picture with reigning champion Essential Quality as well as the aforementioned Greatest Honor. Tapit is no dour stayer, though, for he’s also sired such brilliant types as Unique Bella, Hansen, and Tapitsfly, dam of Japanese classic winner and two-time champion Gran Alegria, who defeated males in three majors last season.
Other Tapit daughters are responsible for Harvey’s Lil Goil, winner of last fall’s Queen Elizabeth II Challenge Cup (G1); multiple Grade 2 vixen Finite, a prime player on the 2020 Kentucky Oaks scene before being sidelined; Silver Prospector, on the 2020 Derby trail for a time after scores in the Kentucky Jockey Club (G2) and Southwest (G3); and reigning Fourstardave (G1) hero Halladay. Much more is to come in this category, since Tapit’s oldest daughters are just 15.
Concert Tour’s dam, Purse Strings, is closely related to Tapit’s first Eclipse Award champion, Stardom Bound. Aside from their sharing the same sire, their dams are half-sisters. Purse Strings was produced by My Red Porsche – a chestnut of course – while Stardom Bound is out of the gray named My White Corvette. Purse Strings was not as successful on the racetrack as her famous relative, needing 12 starts to break her maiden, but she did place eight times along the way. 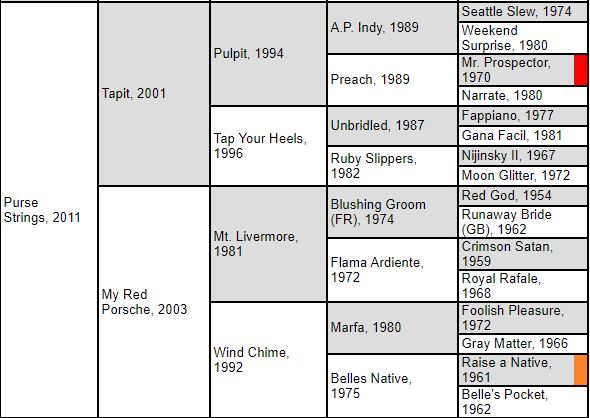 At least Purse Strings outstripped her dam, My Red Porsche, who was winless in seven tries. My Red Porsche was also outshone by her stakes-winning half-sister, My White Corvette, the third-placer in the 2000 Golden Rod (G2) and near-misser in the 2001 Honeybee (G3). My White Corvette did even better as a broodmare, with her daughter Stardom Bound racking up five Grade 1 wins highlighted by the 2008 Breeders’ Cup Juvenile Fillies (G1).

My Red Porsche is by the high-class sprinter Mt. Livermore, whose signature wins came in the 1985 Carter H. (G2) and Fall Highweight H. (G2) (under 140 pounds). Sire of Hall of Fame sprinter Housebuster, Mt. Livermore also got Breeders’ Cup champions Orientate (2002 Sprint [G1]) and Eliza (1992 Juvenile Fillies) as well as Canadian Horses of the Year Mt. Sassafras and Peaks and Valleys. Mt. Livermore factors on the dam’s side of such top-level performers as Code of Honor, promoted to second in the 2019 Derby, and Dialed In, a grandson of Eliza.
My Red Porsche’s dam, Wind Chime, is a daughter of 1983 Santa Anita Derby hero Marfa. Also the winner of that spring’s Spiral (forerunner of the Jeffy Ruby Steaks [G3]), Marfa is himself by 1975 Kentucky Derby champ Foolish Pleasure, the opponent of filly phenom Ruffian in her ill-fated match race.
Wind Chime is in turn out of Belles Native by Raise a Native, the unbeaten champion two-year-old colt of 1963 who went on to a prolific stud career. Sire of Mr. Prospector and 1969 Kentucky Derby victor Majestic Prince, Raise a Native was the key stallion of the 1978 Triple Crown. Affirmed, by the Raise a Native stallion Exclusive Native, bested Raise a Native’s son Alydar in an epic rivalry.
The next (fifth) dam in the maternal line, Michigan-bred Belle’s Pocket, had more blue-collar parentage. The winner of the 1964 Michigan Futurity and 1965 Lansing H., she set a 3 1/2-furlong track record at old Hazel Park.
Finer bloodlines were lurking just a couple of generations back. Belle’s Pocket’s maternal granddam, Lady Bethyl, was bred by Willis Sharpe Kilmer, best known as the owner of the all-time great gelding Exterminator. Kilmer famously purchased Exterminator as a workmate for his pride and joy, *Sun Briar, only to have his understudy win the 1918 Kentucky Derby and compile a Hall of Fame career that left Sun Briar in the shade. Sun Briar did shine in the 1918 Travers, however, and he went on to sire Hall of Famer Sun Beau, a three-time champion for Kilmer (1929-31) and at one point the world’s richest racehorse.
Lady Bethyl was bred on the same cross as Sun Beau. Both were by Sun Briar and out of mares by Fair Play, who is forever honored as the sire of Man o’ War. Their dams’ pedigrees had a further influence in common with Man o’ War: *Rock Sand, the 1903 English Triple Crown winner. Man o’ War and Sun Beau’s dam were by Fair Play and out of Rock Sand mares, while Lady Bethyl has Rock Sand as her second dam’s sire. Lady Bethyl was produced by Virginity, whose parents Fair Play and Sans Tache were both August Belmont homebreds.

Concert Tour traces to the Number 9 family, according to evidence from early 20th-century sources including the American Stud Book. Thus he has a distant ancestress in common with 1945 Kentucky Derby winner Hoop Jr. 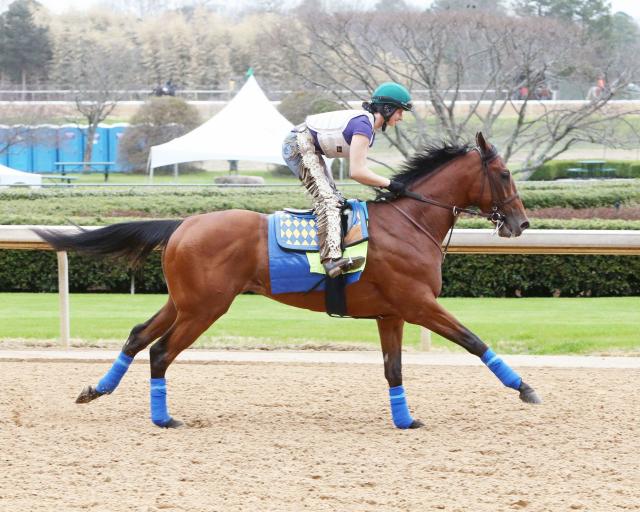