With his convincing victory in the Florida Derby (G1), Known Agenda becomes the latest advertisement for his sire, Hall of Famer Curlin, on the Kentucky Derby (G1) trail.

Curlin is a leading son of the Mr. Prospector stallion Smart Strike, who is emerging as a sire of sires. Other champion sons of Smart Strike making a name for themselves at stud include turf star English Channel and two-time Eclipse Award winner Lookin at Lucky, hero of the 2010 Preakness (G1), and sire of promoted 2019 Kentucky Derby victor Country House.

Himself a veteran of the 2007 Triple Crown trail, Curlin was still inexperienced when third to Street Sense and Hard Spun in the Kentucky Derby. But the brawny chestnut turned the tables on both to take the Preakness, and just got outdueled by champion filly Rags to Riches in the Belmont (G1).
Curlin went on to reign as Horse of the Year twice. Romping in that fall’s Breeders’ Cup Classic (G1), he added the 2008 Dubai World Cup (G1), repeated in the historic Jockey Club Gold Cup (G1), and retired as North America’s then-richest Thoroughbred with a bankroll just shading $10.5 million.

With his profile as an outstanding performer over the American classic distance of 1 1/4 miles on dirt, Curlin had the credentials to become a noted sire of Triple Crown prospects. He validated that idea in no time as his first-crop son Palace Malice captured the 2013 Belmont. Palace Malice is a promising young sire now, whose Like the King booked his Derby ticket in the Jeff Ruby Steaks (G3) – the same day as Known Agenda’s Florida Derby.

Curlin's sequence of classic runners continued with Ride on Curlin, runner-up in the 2014 Preakness. Next came Keen Ice, third to American Pharoah in the 2015 Belmont before handing the Triple Crown champ a shocking loss in the Travers (G1).

Curlin joined the exclusive club of Preakness winners to sire a winner of the middle jewel, courtesy of Exaggerator (2016), who in an echo of his sire was gaining revenge for a second in the Derby. The following year, Irish War Cry was runner-up in the Belmont.

Curlin's prominent hopes in 2018 were champion two-year-old male Good Magic and the later-developing Vino Rosso, but both were stymied by Triple Crown winner Justify. Good Magic was a fine second in the Derby, while Vino Rosso could get no closer than fourth in the Belmont.

Vino Rosso excelled, however, as a four-year-old, and his triumph in the 2019 Breeders’ Cup Classic clinched the champion older dirt male title. It’s been a similar story for Curlin’s best sons of his ensuing crops. Global Campaign was sidelined during the 2019 Derby trail, but scored a career high in the 2020 Woodward (G1). Idol, a 2020 Triple Crown nominee, didn’t make it to the races until the pandemic-delayed Derby undercard, and he just broke through in the March 6 Santa Anita H. (G1).

Curlin’s sired top fillies too, led by champion Stellar Wind. That’s worth noting since he has a few daughters nominated for the 2021 Triple Crown. Malathaat and Clairiere are on a collision course in the Kentucky Oaks (G1), but might they tackle the boys down the road?
Known Agenda’s dam, Byrama, was a high-class mare herself who competed on turf and synthetic surfaces. Thus Known Agenda has a pedigree angle in common with Curlin’s classic-winning sons Palace Malice and Exaggerator. Their respective dams raced mostly on turf (in the case of Palace Malice) or synthetic (Exaggerator), but Byrama was far more accomplished as a Grade 1-winning earner of $659,068.
Bred in Great Britain and exported to Southern California after her maiden romp, Byrama scored her signature victory in the 2013 Vanity H. (G1) over the Cushion Track at Hollywood Park. In addition to a pair of minor stakes wins on turf, she placed in a grand total of 14 stakes, most notably just missing in the 2013 Madison (G1) on Keeneland’s old Polytrack.

Byrama is a daughter of Byron, who descends from the Northern Dancer sire line via one of Danzig’s eminent sons, Green Desert. Note that Green Desert, although primarily a sprinter, is out of a mare by dual English classic legend Sir Ivor (who also lurks in the maternal pedigree of Curlin).

Byron was promoted to the elite Godolphin ranks for his three-year-old campaign in 2004, Beaten less than a length when third in the French 2000 Guineas (G1), he later prospered on the cutback to beat elders in the seven-furlong Lennox (G2) at Glorious Goodwood.

Although not a prolific sire, Byron did get a globetrotting money-spinner of amazing longevity in Gordon Lord Byron. A Group 1 winner in France, England, and Australia, Gordon Lord Byron raced 108 times in his decade-long career, finally retiring on the eve of his 12th birthday.

Byrama’s dam, Aymara, is by a much more formidable patriarch in the Aga Khan’s Darshaan. By 1978 Epsom Derby (G1) winner Shirley Heights – himself a son of the 1971 Epsom hero Mill Reef – Darshaan famously outstayed a certain Sadler’s Wells in the 1984 French Derby (G1).

That result took on added significance through the years, after Darshaan, Sadler’s Wells, and third-placer Rainbow Quest all became influential sires. Darshaan’s bequests include U.S. Horse of the Year Kotashaan, the 1993 Breeders’ Cup Turf (G1) winner, and European Horse of the Year Dalakhani, who crowned his career in the 2003 Prix de l’Arc de Tiomphe (G1).
But Darshaan has made his biggest mark through his daughters, often when bred to his old rival Sadler’s Wells. The leading example is transatlantic champion High Chaparral, who turned the Epsom/Irish Derby (G1) double in 2002 and repeated in the Breeders’ Cup Turf. Darshaan mares are responsible for standouts by other sires as well, as evidenced by The Queen’s Estimate, who beat males in the 2013 Gold Cup (G1) at Royal Ascot; Godolphin’s Marienbard, victor of the 2002 Arc; and the multiple Group 1 celebrities Alexander Goldrun and Al Kazeem. 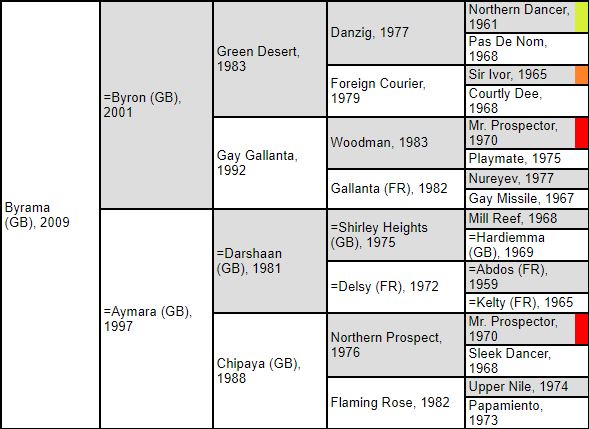 Aymara did her part by foaling two Grade/Group winners. One year before Byrama, she produced Klammer, who garnered the 2010 Horris Hill (G3) and finished best-of-the-rest behind the phenomenal Frankel in the Royal Lodge (G2).

Aymara’s dam, Group 3-placed stakes scorer Chipaya, was also British-bred but with an immediately American pedigree. Chipaya is a daughter of the Mr. Prospector stallion Northern Prospect. Because Mr. Prospector also factors in the pedigree of Byron, in addition to appearing in Curlin, Known Agenda sports three crosses of “Mr. P.”
Chipaya is out of Flaming Rose by Upper Nile, the 1978 Suburban H. (G1) winner in track-record time at Belmont Park. Upper Nile is a full brother to champion turf female De La Rose, both the offspring of Nijinsky II (the legendary English Triple Crown sweeper by Northern Dancer) and a well-bred mare by Hall of Fame Round Table.
Flaming Rose’s granddam, *Commemoration II, was a French import. She comes from a productive female line responsible for such top-level winners in France as Armistice, Melyno, Pharly, and champion Prince Chevalier, himself a noted sire.
Much further back, this is the family dubbed 9-f. Two other Kentucky Derby winners trace to this family, Bold Forbes (1976) and the aforementioned Country House, whose respective lines meet in The Apple (foaled in 1886).
Known Agenda descends from the foundress of the 9-f cohort, the matron known as “Toxophilite mare” (foaled 1861). As that implies, she was sired by Toxophilite. Her dam was the celebrated racemare and producer Maid of Masham, who established her own family labeled 9-e. But her Toxophilite filly became a significant influence in her own right, to such a degree that daughter, and her descendants, were classified as their own tribe, 9-f. 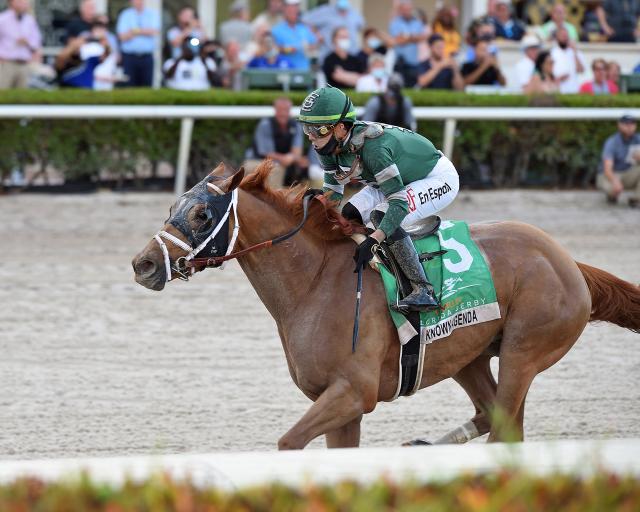