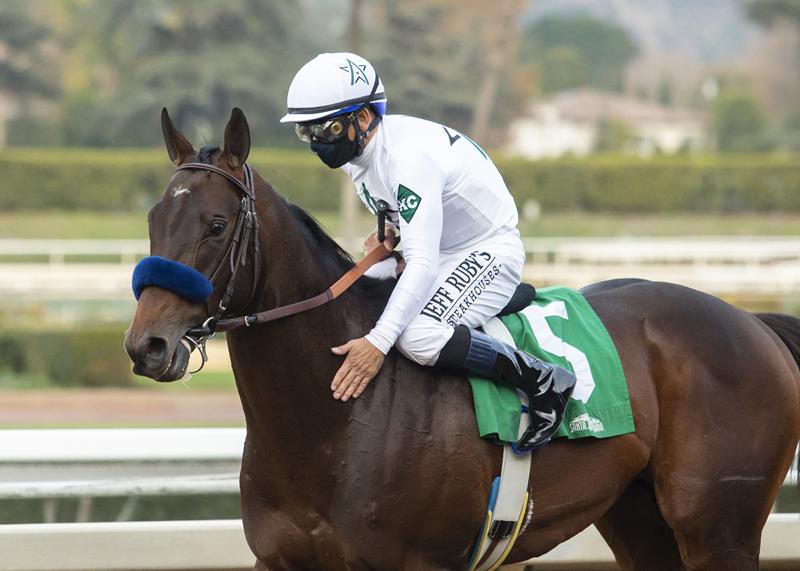 Fresh off establishing a new single-season progeny earnings record for a North American sire, Into Mischief could be in line for an even greater achievement in 2021. No stallion has sired back-to-back Kentucky Derby (G1) winners, so if Life Is Good – or another 3-year-old by Into Mischief – can follow up on Authentic’s success at Churchill Downs last year, it would be an unprecedented feat.

The closest so far is a two-year interval between siring Derby winners, and that in itself is rare.  A half-century after The Finn sired Zev (1923) and Flying Ebony (1925), Exclusive Native furnished Affirmed (1978) and Genuine Risk (1980).
Into Mischief is a scion of the Storm Cat branch of the sire line established by Northern Dancer, the 1964 Kentucky Derby and Preakness hero. Into Mischief’s sire, Harlan’s Holiday, went off as the 6-1 favorite in the 2002 Derby on the strength of daylight wins in the Florida Derby (G1) and Blue Grass (G1), but finished seventh.
Into Mischief’s dam, Leslie’s Lady, was still a relatively obscure Indiana stakes winner when he came along. Although Into Mischief put her on the map by taking the 2007 CashCall Futurity (G1) at Hollywood Park, his younger half-sister – Beholder – would eventually make her Broodmare of the Year. A four-time champion, and three-time Breeders’ Cup heroine, Beholder also whipped males in the 2015 Pacific Classic (G1).
Leslie’s Lady joined an exclusive club as the dam of two Breeders’ Cup winners courtesy of her son Mendelssohn, who garnered the 2017 Juvenile Turf (G1). Mendelssohn propelled himself onto the Triple Crown trail when crushing the UAE Derby (G2), only to have a brutal trip in the slop behind Justify in the 2018 Kentucky Derby. 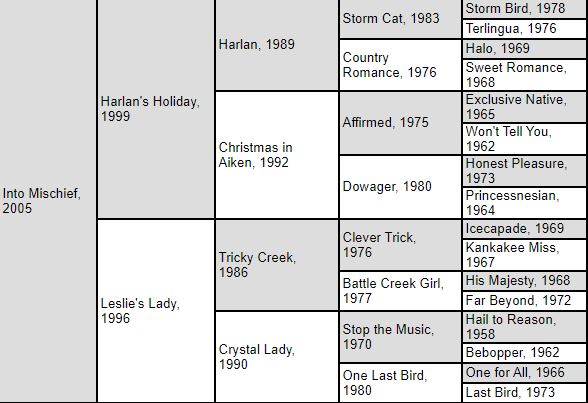 Third in that same Derby was Into Mischief’s son Audible, who became his first offspring to place in a Triple Crown race. His progeny had been making a splash in Derby preps from the start. Into Mischief’s first-crop representatives Goldencents and Vyjack both competed in the 2013 Derby, and Vicar’s in Trouble flew the flag in 2014, but their stamina limitations became evident.

Thus Authentic’s victories in the 2020 Kentucky Derby and Breeders’ Cup Classic (G1) were key to proving Into Mischief’s ability to sire an elite 1 1/4-mile performer. Even so, his progeny are often characterized by one-turn brilliance. Into Mischief has sired the past two winners of the Breeders’ Cup Filly & Mare Sprint (G1), dual Eclipse Award champion Covfefe (2019) as well as reigning star Gamine, likely to receive divisional honors herself.
Another of Into Mischief’s premier one-turners, Practical Joke, is bred on the same cross as Life Is Good – both are out of mares by Distorted Humor. Practical Joke’s signature wins came in the 2016 Champagne (G1) and Hopeful (G1), but he was a creditable fifth in the 2017 Kentucky Derby. Reverting to one turn, Practical Joke added the Dwyer (G3) and H. Allen Jerkens (G1) to his trophy cabinet.
Yet Distorted Humor has well established credentials as a classic sire. Famously siring 2003 Derby and Preakness champion Funny Cide in his first crop, Distorted Humor was also responsible for 2010 Belmont (G1) scorer Drosselmeyer, winner of the following year’s Breeders’ Cup Classic. Another son of Distorted Humor, 2005 Travers (G1) hero Flower Alley, sired 2012 Derby and Preakness star I’ll Have Another. Distorted Humor mares have produced the likes of Arrogate, Constitution, and current Hong Kong Derby winner Golden Sixty, who’s brandishing an 11-race winning streak at Sha Tin. 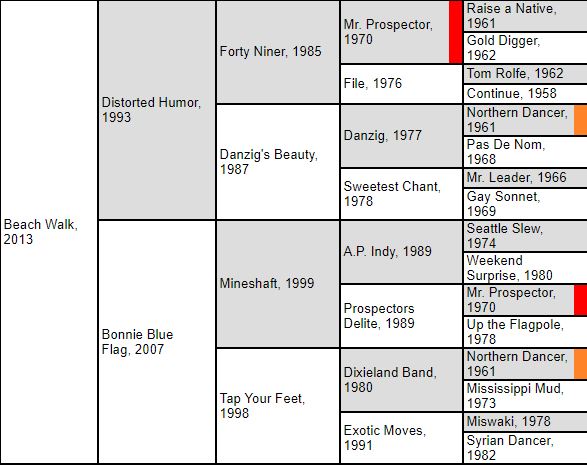 Funny Cide is from a Seattle Slew-line mare, a cross that has continued to be productive for Distorted Humor. Other examples include Alternation (sire of Serengeti Empress) and Any Given Saturday.

Life Is Good’s dam, Beach Walk, is likewise bred on a Distorted Humor-Slew cross. Her dam is Bonnie Blue Flag, by A. P. Indy’s son Mineshaft, the 2003 Horse of the Year.
Like her high-profile grandson Life Is Good, Bonnie Blue Flag was trained by Bob Baffert. She was a notable sprinter in the 3-year-old fillies division in 2010, romping in the 7-furlong Cinemine and placing in both the Test (G1) and Prioress (G1).
Bonnie Blue Flag is out of Tap Your Feet, an Illinois-bred stakes winner. But Tap Your Feet had a more fashionable pedigree than you’d expect, as a daughter of Dixieland Band and the Will Farish-bred Exotic Moves.
The next dam, Syrian Dancer by Hall of Famer Damascus, is a full sister to Honorable Miss, whose significance can be guessed from the fact that a Grade 2 stakes race at Saratoga is named after her. Honorable Miss defeated males in several venerable sprints, including the Fall Highweight H. (G2) twice. Another full sibling to Honorable Miss, Bailjumper, won the 1977 Dwyer (G2) and Saranac (G2). But Bailjumper is perhaps best remembered as the paternal grandsire of Skip Away and broodmare sire of Medaglia d’Oro.
Syrian Dancer’s family is another rich legacy of the turf. Like sire Damascus and her siblings, she was a homebred for Mrs. Thomas Bancroft – whose father was William Woodward Sr. of famed Belair Stud. Syrian Dancer traces to one of Woodward’s French imports, *Princess Palatine, via her daughter Valkyr (by Man o’ War), who produced Vicaress (by Flying Ebony), winner of the 1934 Spinaway, 1935 Ladies’ H., and 1936 Delaware H. among her notable efforts. Vicaress went on to produce Vashti (by Woodward’s 1930 Triple Crown legend Gallant Fox), ancestress of Syrian Dancer.
Another daughter of Valkyr, champion Vagrancy, was an outstanding broodmare whose descendants include 1986 Derby winner Ferdinand. This entire family, labeled 13-c, is responsible for two other Derby heroes in Jet Pilot (1947) and Triple Crown sweeper Seattle Slew (1977). They descend from Princess Palatine’s older half-sister, *Frizeur. Both Princess Palatine and Frizeur are daughters of the great mare Frizette, who also counts Mr. Prospector among her tribe. 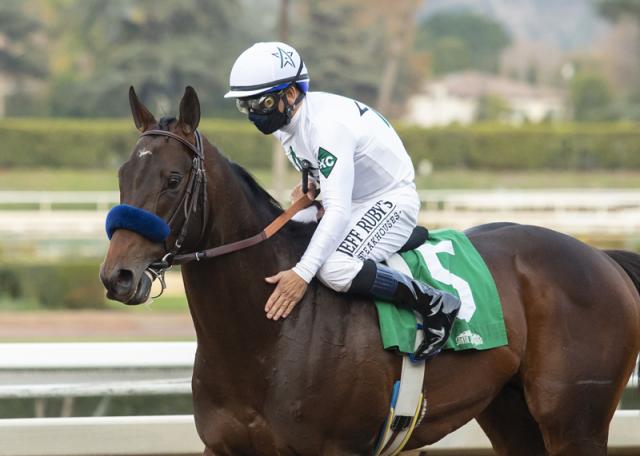