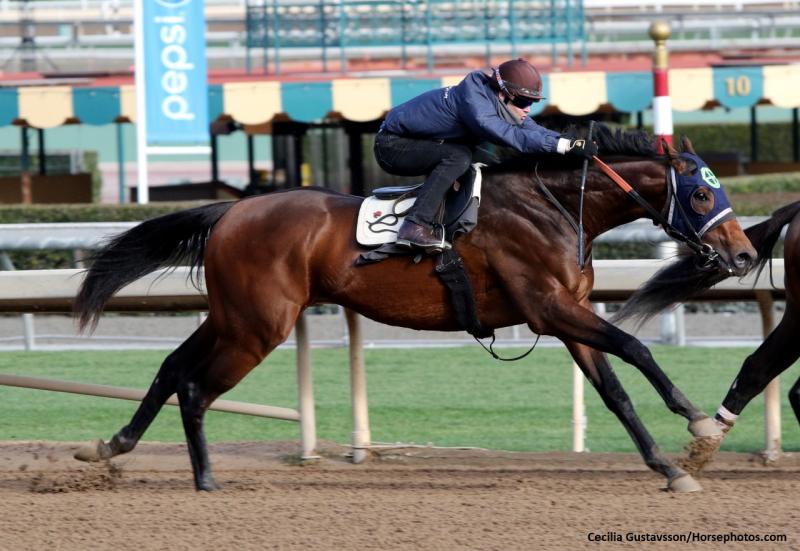 Storm the Court pictured in a Jan. 19, 2020, workout at Santa Anita (Cecilia Gustavsson/Horsephotos.com)

Storm the Court parlayed his upset of the Breeders’ Cup Juvenile (G1) into an Eclipse Award as champion 2-year-old male. Now the third-generation Kentucky Derby (G1) hopeful, whose sire and both grandsires competed in the Run for the Roses, will try to prove he’s no fluke.

Sire Court Vision emerged on the 2008 Derby trail with victories in the Iroquois (G3) and Remsen (G2) in the fall of his 2-year-old season. After a pair of thirds in the Fountain of Youth (G2) and Wood Memorial (G1), he wound up 13th in Big Brown’s Kentucky Derby. But Court Vision later excelled when switching from dirt to turf. A five-time Grade 1 winner on grass, Court Vision went out on a high note in the 2011 Breeders’ Cup Mile (G1), where he sprang a 64-1 shock, and three-time defending champion Goldikova was third.

Court Vision was bred along similar lines to champion Thunder Gulch, hero of the 1995 Kentucky Derby, Belmont (G1), and Travers (G1). Both are by Gulch and out of mares by Storm Bird.

Court Vision’s dam, Weekend Storm, gives him close ties to other classic winners. Weekend Storm is a granddaughter of two Derby winners, Northern Dancer and Triple Crown legend Secretariat. She is a full sister to 1990 Preakness (G1) victor Summer Squall and a half to Hall of Famer A.P. Indy, the 1992 Belmont and Breeders’ Cup Classic (G1) star. Another near relation, champion Lemon Drop Kid, captured the 1999 Belmont and Travers.

Court Vision’s sire, Gulch, likewise capped his career with a Breeders’ Cup triumph – in his case the 1988 Sprint (G1) that also earned him the champion sprinter’s title. But he was no one-dimensional speedster. His seven career Grade 1 wins included the 1987 Wood Memorial (G1) and back-to-back runnings of the Metropolitan H. (G1). Sixth in Alysheba’s Derby, Gulch found classic distances a bit beyond his scope, but his class carried him to a third in the Belmont and fourths in the Preakness and Travers.

Storm the Court is out of My Tejana Storm, whose sire Tejano Run was runner-up in his Derby – ironically to Thunder Gulch. My Tejana Storm’s dam, Sarah’s Settlement, is a granddaughter of 1972 Derby and Belmont hero Riva Ridge. Other Derby winners nearby on the dam’s side include Swaps (1955) and Majestic Prince (1969) (who’s hidden just off the page as the sire of Majestic Light, and grandsire of Wavering Monarch on Tejano Run’s side). 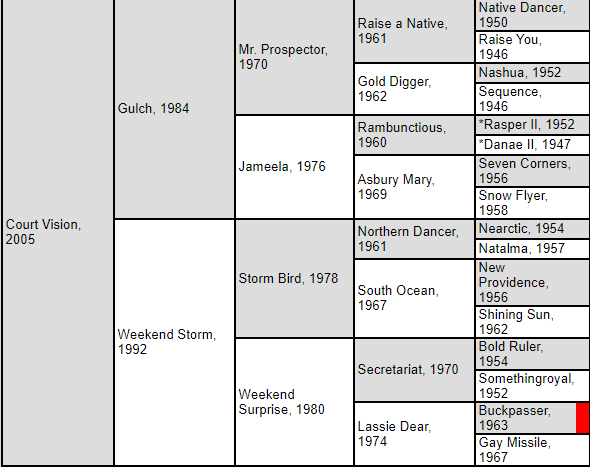 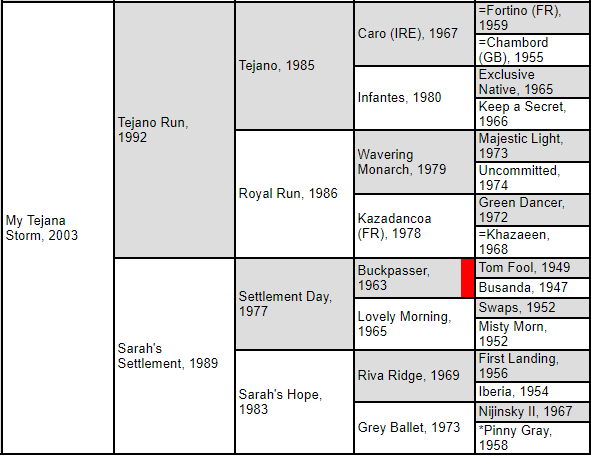 Storm the Court’s pedigree features repetitions of one of the all-time greats who didn’t run in the Derby, Buckpasser. Missing the 1966 Triple Crown because of a quarter-crack in his hoof, Buckpasser went on to a Hall of Fame career and became an influential sire. Buckpasser appears twice within Storm the Court’s first five generations, but he’s lurking in the sixth too (as the broodmare sire of Wavering Monarch). Storm the Court’s dam, My Tejana Storm, is herself inbred to Buckpasser as well as to the legendary Nijinsky II, the last English Triple Crown winner (1970).

My Tejana Storm’s maternal line hails from the family labeled 4-p, sharing an ancestress with 2017 Derby victor Always Dreaming. They trace to imported daughters of the Irish-bred Pin Up Girl. Always Dreaming descends from her 1949 foal, *Mary Gordon. Pin Up Girl’s 1958 foal, *Pinny Gray, counts as the fifth dam of Storm the Court. 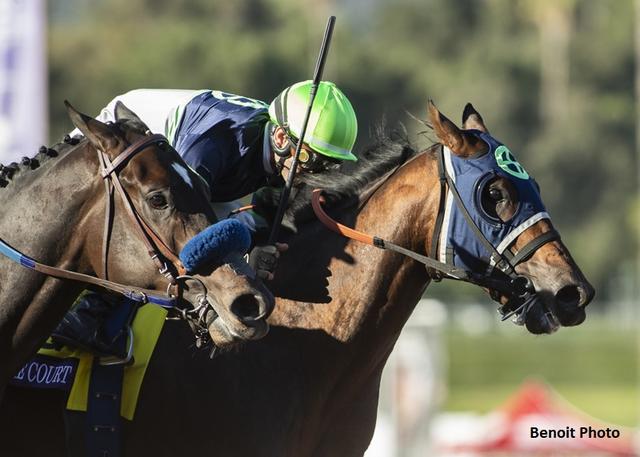