Parx Racing commands most of the attention Saturday with a pair of $1 million races on tap, but there’s plenty of other action to watch as well.

Here’s one take on the top 10 things to know for this weekend’s racing:

1. The $1 million Pennsylvania Derby (G1) will help to establish a pecking order among three-year-olds in the post-Justify world. Will the Triple Crown veterans in the field flatter the now-retired Justify, or will another jump to the fore? The August 25 Travers (G1) posed a similar question, and it was the fresh face of Catholic Boy who overturned the establishment. If the Parx feature produces a similar result, it will become a trend going into the Breeders’ Cup Classic (G1).

2. Three Pennsylvania Derby runners competed in the Triple Crown. Hofburg was a troubled seventh in the Kentucky Derby (G1) and third in the Belmont (G1). Bravazo tried all three jewels of the Triple Crown, coming closest when runner-up in the Preakness (G1). Instilled Regard has been freshened since his fourth in the Derby. Another entrant, Core Beliefs, skipped the classics but had been third to Justify in the Santa Anita Derby (G1), so he too represents the form in a sense.

3. McKinzie, Bob Baffert’s top Derby hope before anyone ever heard of Justify, is chief among the Penn Derby contenders who did not compete in classics. Sidelined after being demoted from a hard-fought win in the March 10 San Felipe (G2), he’s the 5-2 morning-line favorite in his comeback. Mr Freeze, who romped by eight lengths in the West Virginia Derby (G3); Axelrod, winner of the Indiana Derby (G3) and the Parx prep, the Smarty Jones (G3); and King Zachary are all late bloomers now hitting their stride.

4. The $1 million Cotillion (G1) features the clear leader of the three-year-old filly division, Monomoy Girl, who bids for her sixth straight win. The 3-5 morning-line choice to add a fifth Grade 1 to her Eclipse-worthy resume, she gets a rematch with Wonder Gadot, her nearest challenger in the Kentucky Oaks (G1), and familiar foes Midnight Bisou and Chocolate Martini. Separationofpowers, one of last year’s leading juvenile fillies, was sidelined during Monomoy Girl’s rise and now finally gets a chance to take her on at Parx.

5. Battle of Midway, last year’s Breeders’ Cup Dirt Mile (G1) hero, plans to use Saturday’s Kelso H. (G2) at Belmont Park as a stepping stone to his title defense. This marks only his second start back since returning from stud duty. Drawn on the rail, he’ll tote the top weight of 123 pounds, spotting from five to eight pounds to a solid field including Timeline, No Dozing, Realm, Sunny Ridge, Still Having Fun, and Patternrecognition.

6. Collected, off since his uncharacteristic seventh in the January 27 Pegasus World Cup (G1), gets back in action on the Penn Derby undercard at Parx. The Baffert charge swept his first four starts in 2017, capped by the Pacific Classic (G1), before finishing second to Horse of the Year Gun Runner in the Breeders’ Cup Classic. A big performance off the bench in the Pa Derby Champion S. could propel him into the Classic picture.

9. Smart turf filly Uni rates as the 7-5 favorite in the Noble Damsel (G3) at Belmont Saturday. If the Chad Brown trainee had not fallen sick when at Santa Anita for the May 26 Gamely (G1), we would have heard more from her over the summer. She went last to first in her comeback in the August 4 De La Rose, and now meets stablemate Dream Awhile and wire threat Hawksmoor, who stole two graded stakes here last season.

10. Galilean makes his career debut for Hall of Famer Jerry Hollendorfer in Saturday’s Barretts Juvenile at Los Alamitos. The Uncle Mo two-year-old, who topped the Barretts Spring Sale when selling for $600,000, will test his strength against five rivals including Seven Scents and My Mandate. 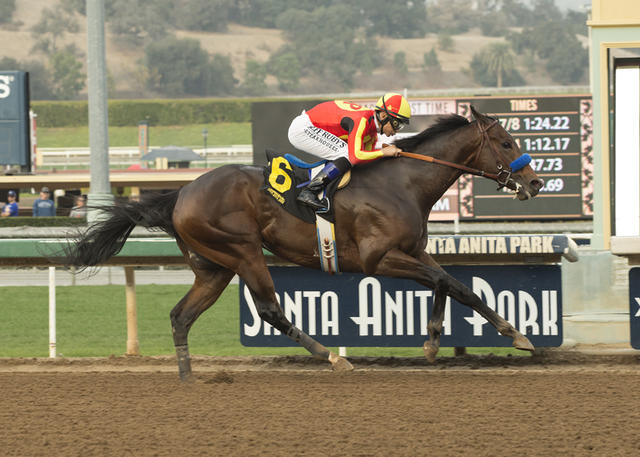