“The most important thing about the work is (jockey) Julien (Leparoux) was happy,” said trainer Mark Casse, who slated to arrive next week in Kentucky.

Helium, an undefeated son of Ironicus, will be ridden by Leparoux in the Derby.

“Because of the spacing of their last two races, I wanted a more serious work out of them,” Pletcher said. “I thought both horses got over the surface well and that’s what was most important about getting them up here early to work over it. All four of these horses have probably been workmates at one point and I paired these two together because of that spacing of their last race.”

The next Pletcher duo to work was Calumet Farm’s Bourbonic and Repole Stable, Phipps Stable and St. Elias Stable’s Dynamic One. The one-two finishers of the $750,000 Wood Memorial (GII), respectively, began their work together through an opening quarter-mile fraction of :24.40 and half-mile time of :48.60. Dyanmic One finished in front of Bourbonic at the wire and continued to gallop out ahead through a six-furlong time of 1:13.20. Bourbonic completed a six-furlong gallop out in 1:14.60.

“I thought it would be good to work both of these horses together after coming out of the same race,” Pletcher said. “I’d say we were definitely surprised at winning the Wood. (Bourbonic) has always trained a little bit light but we always thought that the further the distance, the better it would be for him. He likes to drop back and make one run.”

Pletcher will be the special guest on “Inside Churchill Downs” Friday at 6:30 p.m. on ESPN 680/105.7. The one-hour radio show, hosted by Churchill Downs Racetrack’s Darren Rogers and Kevin Kerstein, along with TwinSpires.com handicapper Scott Shapiro, begins at 6 p.m. and those outside the Louisville area can listen live on www.espnlouisville.com.

Saturday will start the exclusive 7:30-7:45 a.m. training period for Kentucky Derby and Longines Kentucky Oaks contenders. Training hours will move back to a start time of 5:15 a.m. and the track will close at 10 a.m. Saturday’s Kentucky Derby workers are Essential Quality and Mandaloun at 5:15 a.m. and Soup and Sandwich at 7:30 a.m. Fans are invited to watch the workouts for free at Churchill Downs. For more information, visit www.KentuckyDerby.com.

DOWN THE STRETCH – Trainer Chad Brown stated he will work Klaravich Stable’s Highly Motivated and Crowded Trade on Saturday before making a decision which one of the two he would run in the Kentucky Derby. Highly Motivated is based at Keeneland while Crowded Trade is at Belmont Park. … The Churchill Downs Spring Meet is set to kick off for Opening Night on Saturday, April 24. Entries will be taken on Wednesday. … Sunday starts turf training at Churchill Downs from 9:30-10 a.m. Turf training will continue on Sundays and Tuesdays for the remainder of the Spring Meet. … Limited tickets remain for the Kentucky Derby and Kentucky Derby Week. To purchase tickets, visit www.KentuckyDerby.com/Tickets. 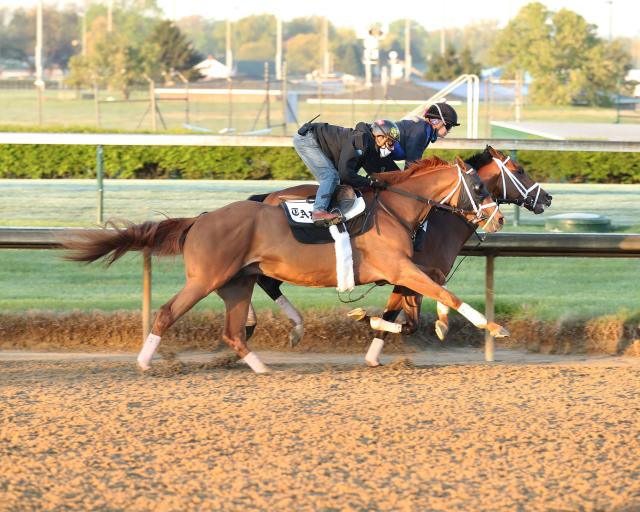