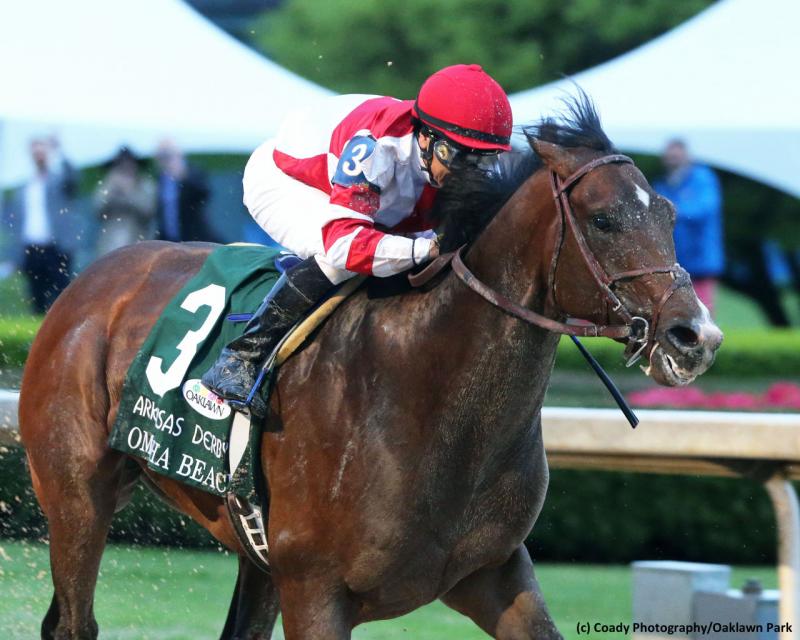 Several owners of likely entrants in this year's Kentucky Derby (G1) are hoping Lady Luck will finally come their way this time in America's most famous race.

Khalid bin Abdullah's Juddmonte Farms and Rick Porter's Fox Hill Farm, who respectively own the top two point earners in the Road to the Kentucky Derby series, Tacitus and Omaha Beach, have each run second in the Derby on two previous occasions.

A powerhouse in Europe (think Frankel, Enable, and Dancing Brave) as well as America, Juddmonte first made a splash in the Derby back in 2000 when Aptitude rallied for second behind Fusaichi Pegasus, who at the time was the first favorite to wear the roses in 21 years.

Fox Hill had the misfortune of running second in the Derby in consecutive years back in 2007-08. Hard Spun led for more than a mile before getting passed by the rail-skimming Street Sense in 2007. Twelve months later, the filly Eight Belles beat all save the dominating winner Big Brown.

Charlotte Weber, an heir to the Campbell Soup fortune, has campaigned horses for decades under the Live Oak Plantation banner, and she will rely on the optimistically-named Win Win Win to score, score, score an upset in this year's Derby. Weber's first Derby starter, way back in 1982, was Laser Light, who rallied late for runner-up honors behind longshot winner Gato del Sol.

Other owners of prospective 2019 Kentucky Derby starters have achieved worldwide success in the sport without having come close to winning the Derby in the past.

William S. Farish, the master of Lane's End Farm and former U.S. Ambassador to the Court of St. James, co-bred 1999 Derby winner Charismatic, but his famous green silks with gold chevrons have not graced the winner's circle in a U.S. classic since Bee Bee Bee pulled off an upset of the 1972 Preakness over Riva Ridge. Farish will be represented this year by homebred Fountain of Youth (G2) winner Code of Honor.

Sheikh Hamdan bid Rashid Al Maktoum's Shadwell Stable, like Juddmonte, has been a powerhouse in Europe for decades, with two victories in the famed Epsom Derby (G1) among its numerous credits. However, Shadwell's best finishes in the Kentucky Derby were fourth-place efforts by Jazil (2006), who later captured the Belmont, and Mohaymen (2016). Shadwell's Derby entrant this year is Gotham (G3) winner Haikal.

Finally there's Alain and Gerard Wertheimer, the French brothers that race as Wertheimer et Frere. From the family that controls the House of Chanel, the Wertheimer's owned 1993 Horse of the Year Kotashaan, champion filly Halfbridled and, perhaps most famously, three-time Breeders' Cup Mile (G1) winner and Hall of Fame mare Goldikova. The Wertheimers will rely on Louisiana Derby (G2) runner-up Spinoff to provide them with a first Triple Crown race win.

While wishing all of this year's participants success and luck in this year's Derby, a victory by any of these notable patrons of the turf would be especially fitting and undoubtedly well received.