The Bourbonette Oaks offered 20 points toward the Kentucky Oaks (G1), but Queen of God is not yet nominated. The daughter of Paynter was making her first start on a surface other than turf, and her transition to Polytrack was in keeping with conventional wisdom about turf runners adapting to synthetic.

As Laura’s Light pressed longshot leader Swanage early, Queen of God was well placed a few lengths back. Laura’s Light took over on the far turn, but began to stall in the final furlong.

By that point, Queen of God was hitting top gear. Driving clear despite wandering down the lane, the dark bay held the late-running Pass the Plate by three-quarters of a length.

“She was in great position to win,” Maker told track publicity. “This was her first race on Polytrack. Very pleased with result. She’s a very game, aggressive filly.

“The owners are out of the country, so we haven’t really communicated,” the trainer added regarding future plans.

“She was really fresh,” Jimenez said. She dragged me up there. I tried to hold her but after the half-mile she took the lead.  She flattened out the last 200 yards.”

Las Ramblas just missed fourth by a neck. Next came Kay Bee Gee, Baby Karats, Oxum Power, A Wicked Wildcat, Swanage, and Fashion Code. Mama’s Grey Ghost was withdrawn along with Secretly Wicked, who was a late scratch after acting up in the gate.

Queen of God clocked the mile in 1:37.77 and improved her scorecard to 7-4-0-0, $161,284. Previously trained by Alexis Delgado, the former claimer is now 2-for-2 with Maker. In her debut for the barn, she captured the Mrs. Presidentress S. – a race restricted to fillies who had competed for a claiming price of $35,000 or less – at Gulfstream Park on Presidents’ Day. 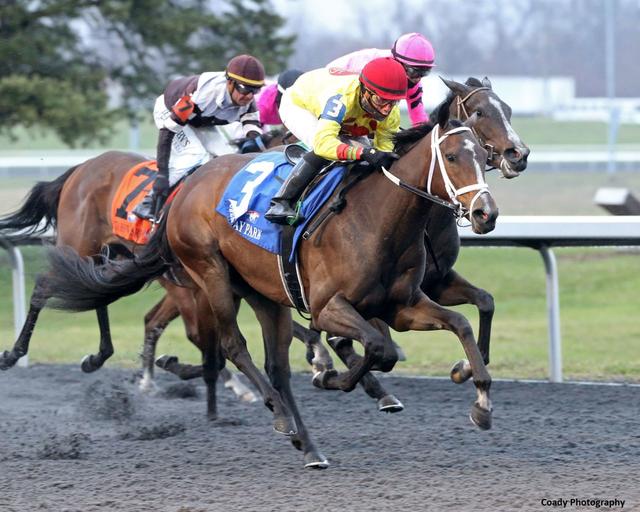