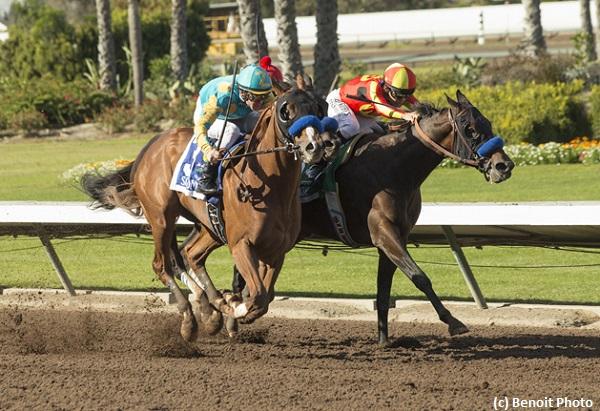 Solomini (outside) got the best of stablemate McKinzie (inside) in the Los Alamitos Futurity (G1) before being disqualified to second.

A contentious field of 11 sophomores has been entered in Saturday’s $900,000 Rebel Stakes (G2) at Oaklawn Park.

FREE Brisnet.com Past Performances for the Rebel Stakes

The 1 1/16-mile affair is part of the Championship portion of the Road to the Kentucky Derby and will award 50-20-10-5 points toward a starting berth in the May 5 Kentucky Derby (G1) at Churchill Downs.

Solomini is one of the top draws in the race and ventures outside of California for the first time in this spot. The chestnut son of Curlin captured his maiden debut at Del Mar last September, then proceeded to fill the runner-up spot in the FrontRunner Stakes (G1) and Breeders’ Cup Juvenile (G1). He captured the Los Alamitos Futurity (G1) on December 9 to close out his juvenile campaign, but was disqualified and placed second in that 8 1/2-furlong event.

Solomini goes in the Rebel for trainer Bob Baffert, who has captured six of the past eight runnings of the Rebel, and retains the services of regular rider Flavien Prat.

Combatant will attempt to break a case of seconditis here that began December 17 in the Springboard Mile at Remington Park. The Steve Asmussen-trained son of Scat Daddy earned his initial score at Churchill Downs in late October, then was runner-up in the Springboard Mile to close out his juvenile season. The bay colt returned January 15 to be second in the Smarty Jones Stakes and filled that same spot most recently in the Southwest Stakes (G3) on February 19. Ricardo Santana Jr. has been holding the reins in all but one of Combatant’s starts and stays aboard for this one.

Sporting Chance took Saratoga’s Hopeful Stakes (G1) last September for trainer D. Wayne Lukas and made his first appearance as a sophomore in the Southwest at Oaklawn. He had a bumpy trip but still managed to finish third over a muddy, sealed track. Luis Saez has been aboard for the Tiznow colt’s past three starts, but John Velazquez will be in the irons in the Rebel.

High North and Zing Zang each finished fifth in their past two starts.

Zing Zang filled the fifth spot in the Southwest, which came one race after a fourth-placing while making his stakes debut in the Lecomte Stakes (G3) at Fair Grounds. The gray son of Tapit was sent off at double-digit odds on both those occasions. Asmussen has tabbed Corey Lanerie to ride Saturday.

Zing Zang’s stablemate Title Ready makes his stakes bow in the Rebel. The More Than Ready sophomore broke his maiden in October at Keeneland and closed out 2017 with a third-place run against allowance/optional claiming foes at Churchill Downs a month later. The Charles Fipke homebred returned to take an allowance over track and distance on February 1, and gets Jose Oritz in the irons for the first time.

The Donnie Von Hemel-trained Higher Power stretches out past a mile in this spot. The colt broke his maiden in his second try at Remington Park in early November, then posted a three-quarter length decision against allowance/optional claiming rivals on January 13 at Oaklawn going eight furlongs. The bay son Medaglia d’Oro colt was under consideration for the Southwest following that last win, but missed some training due to a brief illness. Richard Eramia was aboard for Higher Power’s maiden win and takes back the mount here.

Curlin’s Honor and Magnum Moon each bring a perfect two-for-two mark into their stakes debut in the Rebel. The former comes from the Mark Casse shedrow and scored both his wins by a neck sprinting six furlongs, first at Keeneland on October 7 and then at Fair Grounds on February 25. Magnum Moon broke his maiden by 4 1/2 lengths at Gulfstream Park on January 13 and then traveled to Tampa Bay Downs for a two-length score on February 15 in an allowance/optional claimer.

Pryor faces winner’s for the initial time after wiring his maiden by 5 3/4 lengths on February 19. That was the Ron Moquett charge’s fourth career start and came over a muddy, sealed track going a mile. Robby Albarado has the first-time call here.

Bode’s Maker broke his maiden at Remington Park in September but has been beaten double-digit lengths in all but two of his six starts since. The Allen Milligan pupil keeps Jareth Loveberry in the saddle for this graded bow. 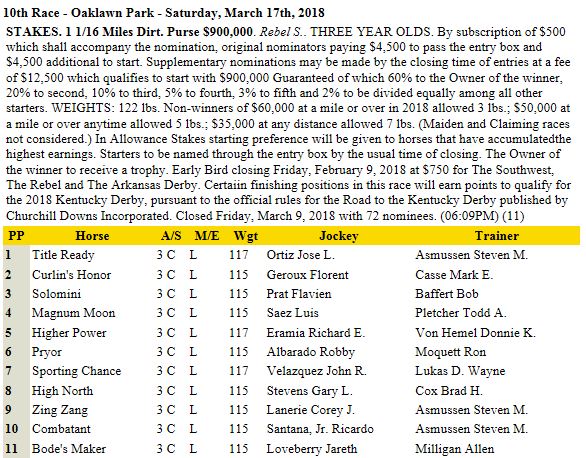 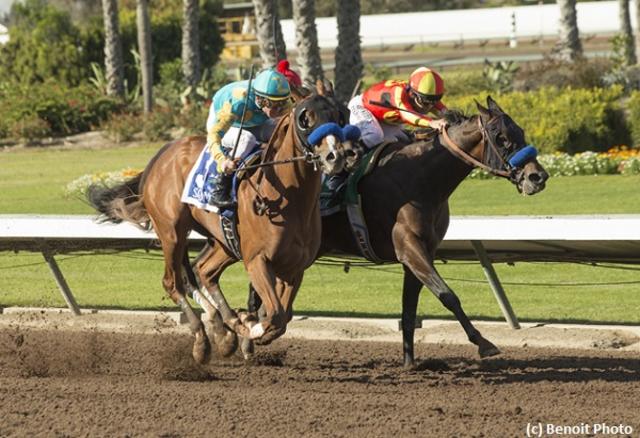