A prominent contender on the Kentucky Oaks (G1) trail before missing her final prep, Red Ruby returned triumphant in Friday’s $250,000 Black-Eyed Susan (G2) at Pimlico. The sloppy conditions brought out the best in the daughter of Hall of Famer Tiznow, who sends out Sporting Chance in hopes of a double in Saturday’s Preakness (G1).

Red Ruby’s fondness for a rain-drenched track was well known, with her signature win coming in the February 10 Martha Washington over the slop at Oaklawn Park. But things had not gone according to plan in the interim. After a fourth in the Honeybee (G3), the Kellyn Gorder trainee had a mishap in the barn that resulted in cuts on her legs. Red Ruby could not get ready in time for the April 13 Fantasy (G3), and ultimately connections believed that it would be too much of a rush job to make the Oaks. But with two works under her belt for the Black-Eyed Susan, and the rains in her favor, the well-bred gray was poised to strike.

When local heroine Goodonehoney was troubled at the start, and thereby unable to employ her pacesetting tactics, Gulfstream Park Oaks (G2) winner Coach Rocks grabbed a clear lead through an opening quarter in :23.28. Red Ruby, with new rider Paco Lopez aboard, advanced to attend Coach Rocks through splits of :47.95 and 1:12.78, and put her away in the stretch. Opening up by 4 3/4 lengths, she negotiated 1 1/8 miles in 1:50.17 and paid $7.80 as the slight second choice at 5-2.

Coach Rocks, who was wheeling back two weeks after finishing seventh in the Kentucky Oaks, was five lengths clear of late-running Indy Union. Sara Street, the slight 5-2 favorite, was all out to salvage fourth from Goodonehoney. Stakes on a Plane, Tell Your Mama, and Mihrab rounded out the order under the wire. C. S. Incharge was eased but walked off the track.

A homebred racing for Sandra Sexton and Silver Fern Farm’s Steve and Brandi Nicholson, Red Ruby has bankrolled $283,000 from her 5-3-1-0 line. She had stamped herself as a potential Oaks prospect when breaking her maiden at Churchill Downs last November before wintering at Oaklawn.

Red Ruby is a half-sister to Mo Tom, the 2016 Lecomte (G3) and Ohio Derby winner who competed in that year’s Kentucky Derby, and stakes scorer Beautician, who placed in the 2009 Breeders’ Cup Juvenile Fillies (G1) and Spinaway (G1). They were all produced by Caroni, a daughter of champion Rubiano, whence Red Ruby gets her gray coat. 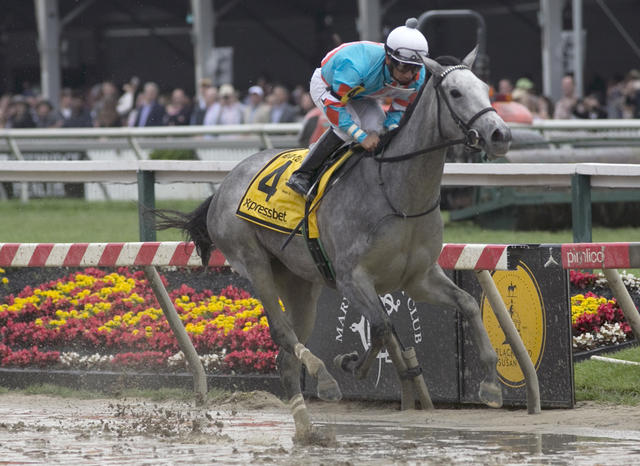