Because Game Winner is bred to prosper with maturity and longer distances, his early success may be a pointer to an unusual degree of talent. He’s by Candy Ride, the sire of 2017 Horse of the Year Gun Runner, and his dam, the unraced Indyan Giving, is a daughter of A.P. Indy and champion older mare Fleet Indian. During her Eclipse Award campaign in 2006, Fleet Indian scored in the 1 1/4-mile Personal Ensign (G1) and Delaware H. (G2), and her other stakes wins all came at 1 1/8 miles, notably the Beldame (G1).

Bred by Summer Wind Equine in Kentucky and sold as a Keeneland September yearling for the relatively modest price of $110,000, Game Winner made his debut at Del Mar August 18. Baffert believed the six-furlong trip was on the short side for him, so it was a pleasant surprise that he rolled by 5 3/4 lengths.

Game Winner was doing so well physically that Baffert decided to try him a couple of weeks later in the September 3 Del Mar Futurity (G1) at seven furlongs. Stablemate Roadster had all the buzz as the odds-on favorite, but Game Winner rose to the occasion to become Baffert’s 14th Del Mar Futurity winner.

Stretching out to 1 1/16 miles for the September 29 American Pharoah S. (G1) at Santa Anita promised to fit Game Winner to a tee. So it proved, appropriately enough for a Baffert trainee in a race renamed for the Hall of Famer’s 2015 Triple Crown sweeper. Game Winner, the 1-5 favorite, widened his margin of superiority over Rowayton, the Del Mar Futurity runner-up who was only third behind him and Gunmetal Gray in the American Pharoah.

As a “Win and You’re In” for the Breeders’ Cup Juvenile (G1), the American Pharoah victory awarded Game Winner a free ticket to the championship event on November 2 at Churchill Downs. And as a scoring race toward the Kentucky Derby, it was worth 10 points to the winner.

Game Winner was sent off as the even-money favorite in the Breeders' Cup Juvenile, but it was anything but a stroll in the park. Not quick into stride, farther back than expected early, and wide every step of the way, he tussled with Knicks Go in the stretch before driving 2 1/4 lengths clear.

Now a lock for an Eclipse Award as champion two-year-old male, Game Winner will try to become Baffert's sixth Derby winner, but his first to compete in the Juvenile along the way. 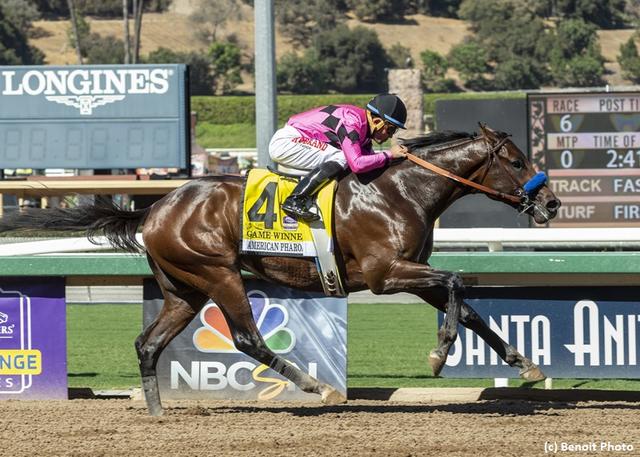