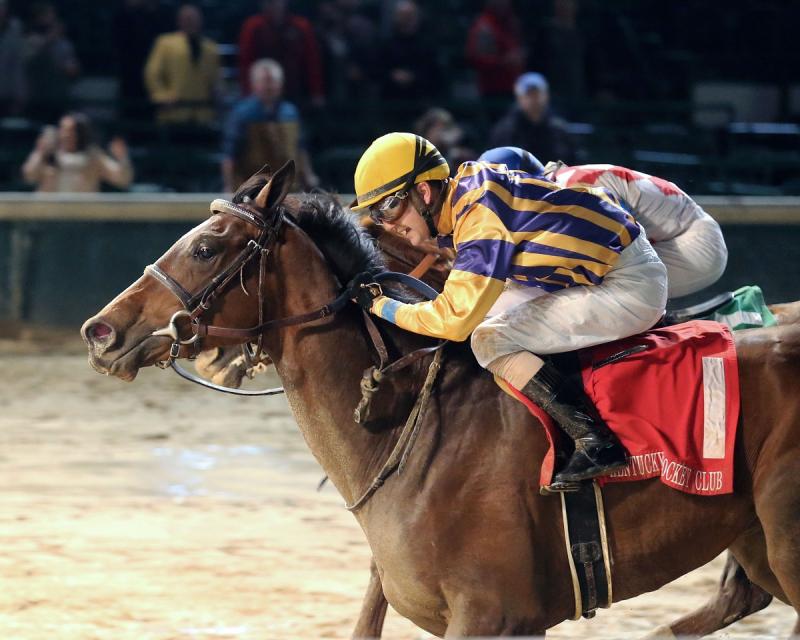 As a big, immature colt by a late-developing sire in General Quarters, SIGNALMAN figured to be a work in progress, so it’s an encouraging sign that he’s achieved what he has at two.

By the comparable point in his career, General Quarters had only a maiden claiming win from six starts. He would improve markedly at three to become a heartwarming story on the 2009 Kentucky Derby (G1) trail. The only horse at that time for his elderly owner/trainer, Tom McCarthy, General Quarters landed the Blue Grass (G1) and Sam F. Davis (G3), and at the age of four, he went on to add the Woodford Reserve Turf Classic (G1).

Signalman’s dam, the unraced Trip South, produced three prior winners but none approaching his stature. Only one of them scored at two (in Russia), reinforcing the point that Signalman has outperformed his immediate pedigree.

Bred by Monticule, the breeder of 2008 Kentucky Derby and Preakness (G1) champion Big Brown, Signalman was sold to trainer Kenny McPeek for $32,000 as a yearling at Fasig-Tipton Kentucky October. The price was modest, but a good one in the context of his parents. General Quarters had already been exported to Turkey when Signalman was a weanling, around the same time that dam Trip South brought a scant $1,700 at Keeneland November.

Signalman made his career debut in a five-furlong dash at Churchill Downs May 17. He was off a beat slow, but launched a sustained rally to finish second to Sir Truebadour, the eventual winner of the Bashford Manor (G3). Signalman broke his maiden next time out at Saratoga on September 1. Stepping up to seven furlongs, he showed a new dimension by stalking early, pouncing, and coming again when apparently headed to prevail in a three-way photo.

Now earning a crack at Derby points races, Signalman ran capably to place twice at the Grade 1 level despite adverse circumstances. He was jostled almost sideways turning for home in the Breeders’ Futurity (G1) at Keeneland, where he had no chance of catching front-running Knicks Go, but regrouped for second at odds of 10-1. In the Breeders’ Cup Juvenile (G1), drawing the far outside post 13 put him much further back early than he otherwise would have been. Still, he steadily picked his way through the field to finish third at 67-1.

Signalman had a better trip in the Kentucky Jockey Club (G2) and made the most of it. Traveling smoothly into position on the rail, the 7-2 chance split foes to take command. Then his immaturity almost cost him, as he began to gawk around, but renewed his focus in time to hold off Plus Que Parfait by a neck.

Racing for Tommie M. Lewis, David A. Bersen, and the Magdalena Racing of the trainer’s wife, Sherri McPeek, Signalman brings a record of 5-2-2-1, $448,990, into his sophomore campaign.