Feb 4, 2019 John Mucciolo/TwinSpires.com
Tweet
R. A. Hill Stable, Reeves Thoroughbred Racing, Hugh Lynch and Corms Racing Stable’s Tax surged through an opening along the inside in early stretch and held a pair of stubborn foes at bay to the wire in securing a head victory in the $250,000 Withers Stakes (G3) at Aqueduct on Saturday. He earned 10 points on the Road to the Kentucky Derby for his tally.

The dark bay began his career in a modest $30,000 maiden claiming event at Churchill Downs and finished second going 6 ½ furlongs. The gelding reappeared at Keeneland and stretched out to 1 1/16 miles with $50,000 foes, and he graduated with a two-length tally while being claimed out of the race by his current connections.

Tax tried graded foes in his first run for the new outfit when facing six opponents in the Remsen Stakes (G2) at Aqueduct in November. The Kentucky-bred tracked eventual winner Maximus Mischief to late stretch before finishing a creditable third, beaten by just 2 ¾ lengths.

Since being claimed and adding Lasix, Tax has posted hefty 102 and 103 BRIS Speed figures in a pair of graded encounters. He has also posted BRIS Late Pace numbers of 114 and 96 in his last two, so added distance looks to be of little concern to the sophomore.

Tax was bred by Claiborne Farm and Adele B. Dilschneider, and he was produced from the winning Giant’s Causeway mare Toll. Toll is a half-sister to stakes heroine Cheery, the dam of multiple Grade 1 queen Elate. This is a superb Claiborne-bred family that goes back generations, and one that has produced countless accomplished runners.

The Withers victor already has three route races under him, including a pair going nine furlongs. He is proven to be of graded quality and gives the impression of a gelding that can run all day.

His competition will surely get stiffer throughout the winter and spring, and we will get a better idea of just how classy Tax is at this stage of his development. But if you are looking for a three-year-old with gate presence, a strong foundation and a pedigree that could compare to most on the Road to the Kentucky Derby, then Tax might be your horse.

After all, it is tax season!(Tax photo by Coglianese Photos/Joe Labozzetta) 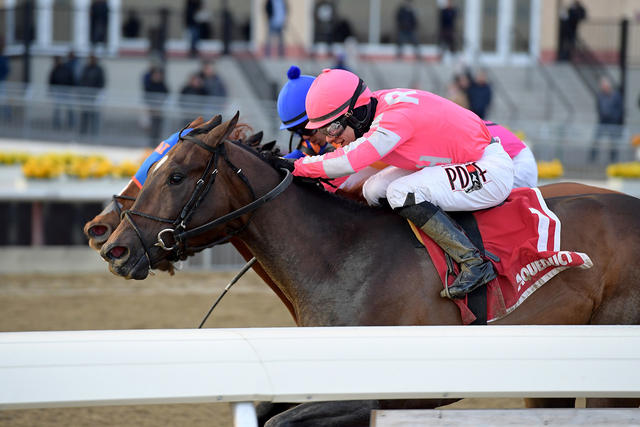