The “Prep Season” portion of the Road to the Kentucky Derby Series came to a close Monday with the $500,000 Southwest (G3) at Oaklawn. One Liner burst onto the leader board with an emphatic victory in his stakes debut for Todd Pletcher, and currently sits at #9 with 10 points.

Southwest runner-up Petrov scored an additional four points and retained his position in the top 20 (#15), but Southwest favorite Uncontested (#8) faltered badly in the final quarter-mile and finished up the track, casting doubt on his ability to see out 1 1/4 miles on the first Saturday in May if he makes the field.

The other domestic prep of the past week was Saturday’s El Camino Real Derby (G3) at Golden Gate Fields. While points were awarded, neither of the top two finishers are as yet Triple Crown nominated, thus their present absence from the top 20.

The Japan Road to the Kentucky Derby also concluded at the weekend. One spot in the Derby starting gate has been set aside for an invitee, with the order of preference being Epicharis, Mont Saint-Legame, and Adirato.

The focus of the Road to the Kentucky Derby Series now shifts to the “Championship Season,” comprised of all the preps worth either 50 points or 100 points to the winning horse. A victory in any of these races virtually locks up a spot in the Kentucky Derby starting gate. Second-place finishers, in particular those in the final seven preps worth 100 points to the winner, are also typically in strong positions to lock up starting berths. 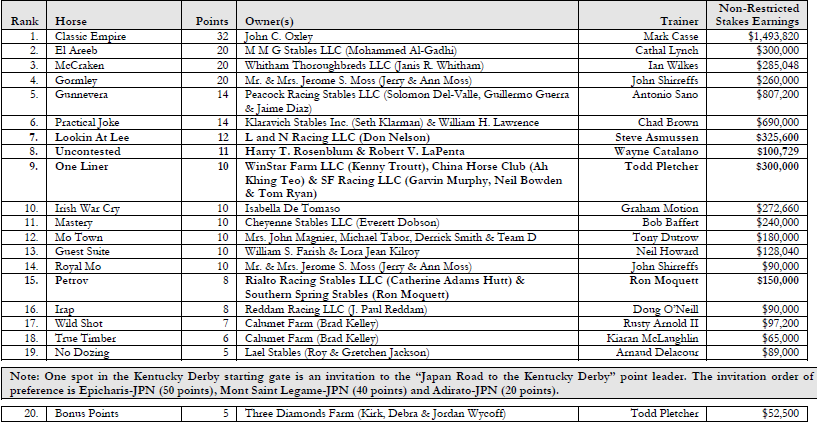