Road to the Kentucky Oaks: Bast is best in Chandelier Stakes 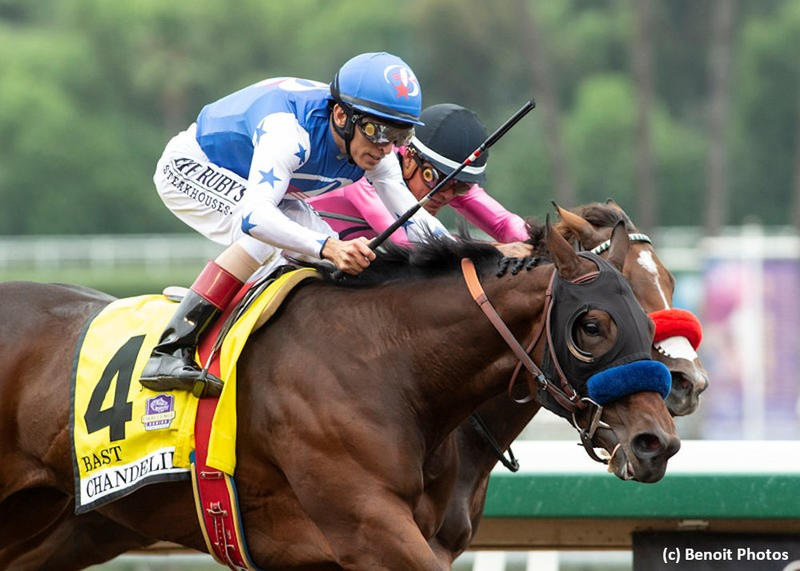 A sluggish start and a ding-dong battle down the homestretch pushed heavy favorite Bast to her limit in Friday’s $300,000 Chandelier Stakes (G1) at Santa Anita. But when push literally came to shove, Bast clenched her teeth and battled to a tenacious victory.

The daughter of Uncle Mo was favored at 1-5 off a dominant triumph in the Del Mar Debutante (G1) at Del Mar four weeks ago, where she scored by 8 3/4 lengths. Transitioning to the slower track at Santa Anita – and simultaneously stretching out from seven furlongs to 1 1/16 miles – figured to provide Bast with a stiff test of her abilities.

Indeed, the Chandelier was a much tougher challenge. After breaking slowly under jockey John Velazquez, Bast recovered to press Schuylerville Stakes (G3) winner Comical through fractions of :24.92, :49.54 and 1:13.98 while racing three-wide.

At the top of the stretch, Bast confronted Comical, but the pacesetter refused to give way without a fight. The two fillies matched strides down the lane and appeared to brush at times, but Bast always held a slight advantage and dug deep to win by a neck in 1:46.10 seconds. K P Dreamin, Been Studying Her, and Buyer’s Remorse rounded out the order of finish, while Leucothea unseated her rider at the start.

“This means a lot,” said Velazquez. The victory was his 661st in a graded race, breaking the record of 660 set by fellow Hall of Fame rider Jerry Bailey. “(Bailey) is a guy who I rode with for so many years and have looked up to for so long. It’s incredible.

“Going to the backstretch, (Bast) looked really good, and I was pretty confident. We got to the turn and I thought we might go a little wide, but I said ‘No, no – you have to stay there.’ I got up to her and she cruised down the lane and put her head out in front of the other horse. She gave me a lot today. I felt she gave me what she could to win the race.”

By winning the Chandelier, Bast secured a “Win & You’re In” berth to the November 1 Breeders’ Cup Juvenile Fillies (G1) at Santa Anita, where a victory would almost assuredly clinch her an Eclipse Award as the champion two-year-old filly of 2019. In addition, the Chandelier is part of the 2019-20 Road to the Kentucky Oaks, and Bast’s triumph moved her to the top of the early leaderboard with 10 qualification point.

“I thought, wow, man, she’s really going to have to fight for this, but if she’s a really good filly, like I think she is, she’ll get through it, and she got that last eighth of a mile. It just shows you how competitive these horses are," said Baffert. "I had gone a little light on her (training) so I just told John she’s not going to be as tight...I felt there’d be a little room for error, but there wasn’t much room at all.”

Baffert confirmed the Breeders’ Cup would be next for Bast, who is owned by Baoma Corp. Bred by BlackRidge Stables LLC, Bast was purchased for $500,000 as a yearling. 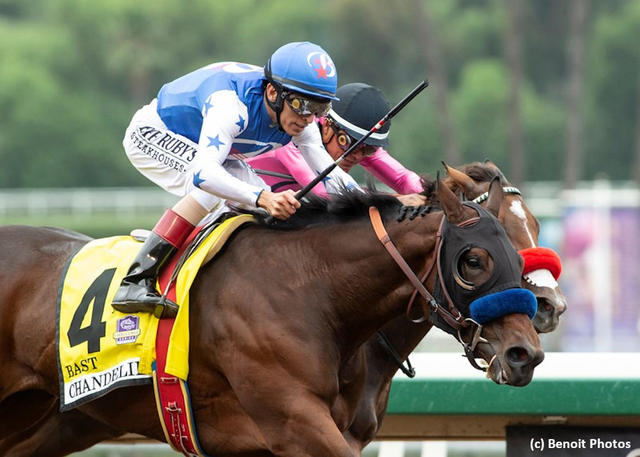