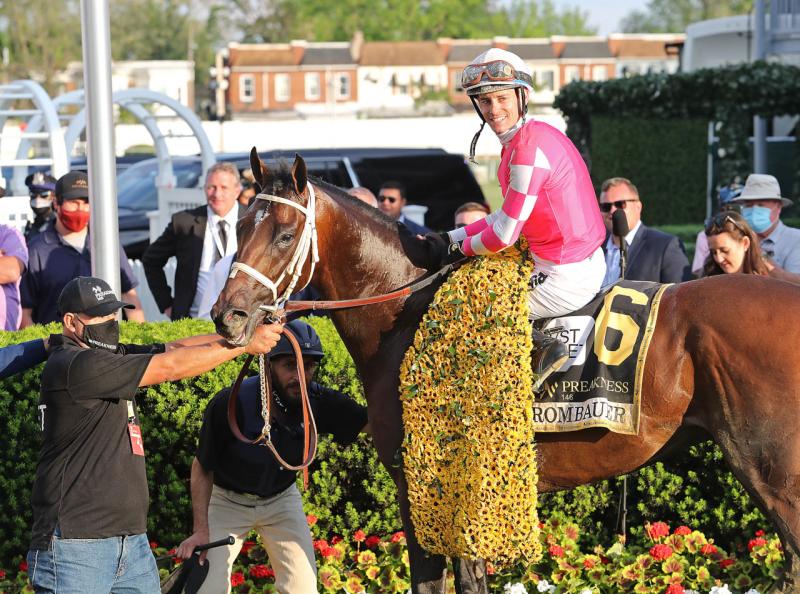 Preakness S. (G1) upsetter Rombauer is expected to face at least nine rivals in the June 5 Belmont S. (G1), including six last seen in the Kentucky Derby (G1). Here’s the projected cast for the Belmont along with plans for the other Derby graduates.

Hot Rod Charlie and previously unbeaten champion Essential Quality, the respective third and fourth across the wire at Churchill Downs, lead the Derby alumni pointing for the Belmont. Others freshened since the May 1 Run for the Roses are Known Agenda (ninth), Bourbonic (13th), Brooklyn Strong (15th), and Rock Your World (17th).
Aside from Rombauer, the only other Preakness runner confirmed for the Belmont is Japan’s France Go de Ina, who was a tiring seventh at Pimlico. Preakness fourth Keepmeinmind, previously seventh in the Kentucky Derby, is listed as possible for the Belmont. Trainer Robertino Diodoro is seriously considering the June 26 Ohio Derby (G3), however, as an alternative.
First-ballot Hall of Famer Todd Pletcher is likewise inclined toward the Ohio Derby for Promise Keeper. Yet as the convincing winner of the May 8 Peter Pan (G3), the local prep for the Belmont, Promise Keeper is still possible for the third jewel. Pletcher already has three definitely Belmont-bound – the aforementioned Known Agenda and Bourbonic as well as Peter Pan third Overtook.
The most fascinating new shooter is Godolphin’s UAE Derby (G2) star Rebel’s Romance, who hopes to become the first international shipper to take the Belmont since Ireland’s Go and Go in 1990. Rebel’s Romance had qualified for the Kentucky Derby, but trainer Charlie Appleby wanted to give the homebred gelding more time. For detailed analysis of Rebel’s Romance including race replays, see his international scouting report at TwinSpires.com.
Get Her Number has been mentioned as a potential Belmont contender, but he’s entered in the $300,000 Texas Derby at Lone Star Park on Memorial Day, May 31. That’s also on the agenda for Super Stock, the 16th-place finisher in the Kentucky Derby.
If Keepmeinmind does advance to New York, he’d be the lone combatant to make all three Triple Crown races this year. Medina Spirit, the first-past-the-post in the Kentucky Derby, is getting a break after his third in the Preakness. Midnight Bourbon, sixth in the Derby and second in the Preakness, is looking ahead to targets later in the summer.
Mandaloun, who was just a half-length adrift of Medina Spirit at Churchill, will return in the June 13 Pegasus S. at Monmouth Park according to Daily Racing Form. The 1 1/16-mile affair is a prep for the same track’s July 17 Haskell (G1). The Pegasus is reportedly one of the upcoming stakes options in play for Derby 14th-placer Hidden Stash.
Derby fifth O Besos could renew rivalry with eighth-placer Helium in Saturday’s Matt Winn (G3) back beneath the Twin Spires, or wait for the Ohio Derby. Highly Motivated plans to shorten up after retreating to 10th in the Derby, with the July 5 Dwyer (G3) at Belmont Park his next target.
Sainthood and Like the King, just a head apart when 11th and 12th respectively, are both switching to turf. While Sainthood is entered in Saturday’s Pennine Ridge (G2) at Belmont, Like the King is likely to run the same day in Churchill’s Audubon S.

Dynamic One, 18th in the Derby, won’t be seen again until Saratoga. Soup and Sandwich, eased home last of 19 after displacing his palate, was subsequently fine as trainer Mark Casse tweeted the next day. Look for the lightly raced colt to regroup.

The Belmont, which anchors a lucrative three-day stakes festival, will be drawn June 1. 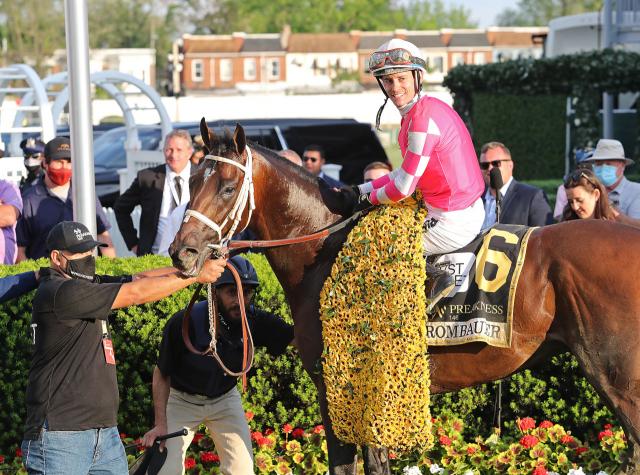