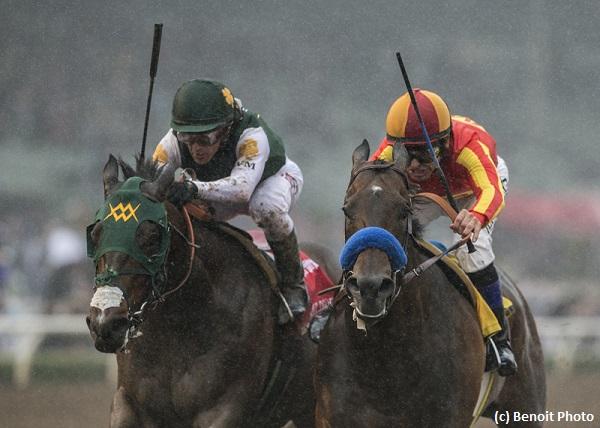 Bolt d’Oro finished a head behind McKinzie on the wire of Saturday’s $400,690 San Felipe Stakes (G2) at Santa Anita Park following a stretch-long duel that saw the pair exchange bumps over the fast main track.

The close finish, and multiple contacts, resulted in the stewards immediately posting an inquiry. The decision to disqualify McKinzie and place him second took a bit longer, but in the end Bolt d’Oro returned a winner for owner/trainer Mick Ruis.

The victory was worth 50 points to the bay son of Medaglia d’Oro in terms of Kentucky Derby (G1) points, as the San Felipe is part of the Championship portion of the Road to the Kentucky Derby series.

That, combined with the 14 Bolt d’Oro earned for wins in the last year’s FrontRunner Stakes (G1) and Del Mar Futurity (G1) as well as a third-placing last out in the Breeders’ Cup Juvenile (G1) on November 4, saw the colt take up the top spot on the Kentucky Derby Leaderboard with 64 total points.

Lombo led early in the San Felipe but McKinzie was pressing the entire way. The pacesetter began fading, but Bolt d’Oro was charging fast under jockey Javier Castellano to challenge McKinzie on the outside.

The pair exchanged bumps entering the stretch, and then again when McKinzie came out under left-handed encouragement from jockey Mike Smith. It was nip/tuck to the wire, but McKinzie got his head in front as the even-money favorite to stop the clock in 1:42.71 for 1 1/16 miles.

Though the Street Sense colt finished first, it was Bolt d’Oro who wound up getting his picture taken in the winner’s circle. McKinzie now sits in sixth on the Derby Leaderboard with 40 total points thanks to the 20 he earned for second in the San Felipe.

It was 6 1/2 lengths behind the duo to third-placer Kanthaka, who made his Leaderboard debut with 10 points. Peace followed by another half-length in fourth, good for five points. Ayacara, Aquila and Lombo completed the order under the wire.

Bolt d’Oro was making his much-anticipated sophomore bow here after skipping his earlier scheduled kick off to 2018 in the San Vicente Stakes (G2) on February 10. The WinStar Farm-bred colt captured his first three starts and was sent off the 3-5 favorite in the Breeders’ Cup Juvenile, where he finished third after a troubled trip.

“He broke really well out of the gate and put me in a good spot in the race. He broke and shot out of the gate and put me where I wanted to be. I didn’t want to be too far back and I think it was a perfect ride for him. I was concerned a little bit in the last part of the race, especially around the last sixteenth. I think that my horse tried to hold back to force inside and we had some contact. They say he tried to intimidate my horse and that is why I couldn’t get past him. I wish it would’ve just been the two horses running straight in the race. We were the best two horses in the race. I just want to see who the better horse is.”

“Anytime it takes that long and you’re the one who won, you certainly don’t like it. I didn’t feel that I did anything. I was forced out. He hit me hard behind and it took me out. It turns you out.

“This was a steppingstone and that’s all we needed. He’ll come back good. We wanted to run a good race. I don’t think the fans and everybody else could have had a better finish from the two horses they thought were going to run like they expected.

“Bolt hadn’t run in a while. I had one three-quarter work in him; this wasn’t the race we were looking forward to. We’re looking forward to the ($1 million) Santa Anita Derby ([G1] on April 7) and then that next race that I won’t mention yet (May 5 Kentucky Derby).”

Asked if this was the best he ever felt in defeat

“Oh, yes. Coming into this race, (he dragged them) from the receiving barn to the paddock. In the Breeders’ Cup (Juvenile), his head came down a little bit, he didn’t have as much life. The horse is good right now. Hopefully, we’re moving forward and he’ll be at his best in a couple months. This horse has the heart of a lion. Nine weeks ago he was undergoing a nuclear scan and here we are today. Just being within a nose of Baffert, I’m happy.

“I wasn’t even thinking about the inquiry the whole time. I was just so proud of Bolt, and if he got moved up, he did. This wasn’t the race we were really pointing for. We want to go to the Santa Anita Derby, but getting moved up is awesome; we’ve got enough (Kentucky Derby qualifying) points (50).”

B. Wayne Hughes, owner of Spendthrift Farm where Bolt d’Oro will stand at stud upon retirement

“I was pretty darn excited when we heard the announcement and that’s when I thought it OK to come down to the winner’s circle. We could see clearly that there was interference. Mike (Smith) was hitting left handed, driving them into Bolt.

“His last work was off the chart. We were very excited going into today. Mick (Ruis) is a good trainer. He might be new but he’s not fresh. He’s got some judgment about him and I give him the credit.”

“They’re taking way too long for this. The longer this goes it certainly isn’t good. But, after the way that horse hit McKinzie at the top of the stretch…give me a break. It was game over.

After the announcement of McKinzie being disqualified

“That’s some bulls…Javier (Castellano) had a better story, I guess. I’m shocked, after the way he hit us at the top of the stretch. I don’t know what they’re looking at, but apparently he talked them into it. That’s why they should never talk to the jockeys, just watch it themselves.”

“It was a unanimous vote, yes. There were two incidences at the top of the stretch. The shots that were shown were inconclusive as to who initiated the contact at the head of the stretch. So they couldn’t be clear on any one horse. The incident inside the sixteenth-pole was clear.

“McKinzie, number four, came out under a left-handed whip and shifted number one, Bolt d’Oro, out, off his path and cost him a better placing. The margin of win was only a head so therefore, McKinzie was taken down.”