The Fair Grounds Road to the Kentucky Derby kicks off in Saturday’s $200,000 Lecomte (G3), a 1 1/16-mile contest worth points on the 10-4-2-1 scale. The full field of 14 ranges from established stakes performers like Scabbard and Enforceable to up-and-comers led by Silver State.

Scabbard played second fiddle to two impressive juveniles last season. Runner-up to Green Light Go in the Saratoga Special (G2), the Eddie Kenneally pupil was a troubled second to Dennis’ Moment in the Iroquois (G3). Scabbard turned the tables on Dennis’ Moment in the Breeders’ Cup Juvenile (G1) last out, but neither did himself justice at Santa Anita. While Dennis’ Moment lost it with a bad stumble at the start, and wound up last, Scabbard never gained much traction in a soldiering-on fourth.

With 6 Derby points to his credit – good for 13th on the leaderboard – Scabbard has the look of a promising sophomore who’s better than his bare results suggest. The son of internationally successful sire More Than Ready will break from post 4 with Corey Lanerie.

Enforceable has run creditably in both of his points races, finishing a distant third in the Breeders’ Futurity (G1) and a closing fourth in the Kentucky Jockey Club (G2). The royally bred son of Tapit has yet to live up to his pedigree, as a full brother to Mohaymen (fourth in the 2016 Kentucky Derby) and a half-brother to New Year’s Day (sire of Maximum Security), but trainer Mark Casse might conjure up further improvement. Enforceable, who needed 1 1/8 miles to break his maiden at Saratoga last summer, is drawn in post 10. Julien Leparoux picks up the mount. Others exiting the Kentucky Jockey Club are Finnick the Fierce, a surprising second at 87-1, and New Eagle, a tiring fifth after setting the pace.

Casse, who won the 2019 Lecomte with future Preakness (G1) star War of Will, also entered Lynn’s Map. From the first crop of 2015 Breeders’ Cup Dirt Mile (G1) hero Liam’s Map, Lynn’s Map has won his last two including the local allowance prep over Mr. Monomoy (half-brother to champion Monomoy Girl) and Excession. But he’ll have to deal with post 14 in the rematch, and Mr. Monomoy is eligible to do better in this second try at two turns. Like his Kentucky Oaks (G1)-winning half-sister, Mr. Monomoy is trained by Brad Cox, ridden by Florent Geroux, and campaigned by some of the same partners. The Palace Malice colt was a dominant maiden winner at Churchill two back.

Silver State, one of a trio entered by Hall of Famer Steve Asmussen, keeps jockey Ricardo Santana Jr. in the irons for his stakes debut. After overcoming a slow start to dead-heat for a Churchill Downs maiden win, the son of Hard Spun just missed in an allowance despite a tough trip in the slop. The stretch-out to two turns should suit Silver State, since he’s out of an Empire Maker mare and his granddam is a full sister to 2001 Derby winner Monarchos.

Unbeaten stablemate Halo Again races for the same connections, Winchell Thoroughbreds and Willis Horton Racing. The Churchill 7-furlong maiden romper successfully invaded Woodbine for the 1 1/8-mile Coronation Futurity, where he gamely prevailed on the class and distance hike. The $600,000 Keeneland September yearling now takes another test, rising from a restricted stakes (for Canadian-breds) to graded company. Joe Talamo gets the riding assignment.

Rounding out the Asmussen squad is Excession, who needs to step up from that allowance loss. The son of Union Rags is also one of three representing Calumet Farm, along with the aforementioned New Eagle and Shashashakemeup, a son of Shackleford who makes his two-turn debut following a fourth in the Sugar Bowl.

Bango, third in Silver State’s maiden, graduated next time at Churchill. No match for Art Collector in an allowance sprint beneath the Twin Spires, the Greg Foley trainee has appeal trying this trip. He hails from a deep family including Revolutionary, the 2013 Louisiana Derby (G2) winner and Kentucky Derby third, as well as 2003 Horse of the Year Mineshaft.

Sycamore Run, by 2007 Derby champion Street Sense, went wire to wire in his 6-furlong career debut at this track. This is a big step up for his first try versus winners, and at a route, and post 13 doesn’t help. On the plus side, he has trainer Joe Sharp and jockey Adam Beschizza in his corner.

Jack the Umpire, a son of Bodemeister, rolled in his last pair against lesser at Delta Downs. His front-running coup in the Jean Lafitte has lured Shaun Bridgmohan into the saddle. Perfect Star, an Into Mischief half-brother to Grade 1 queen Her Emmynency, has scored both of his wins on turf.

Anchoring a 13-race card at Fair Grounds, including six stakes, the Lecomte is scheduled for 6:55 p.m. (ET).

Watch and wager at TwinSpires.com 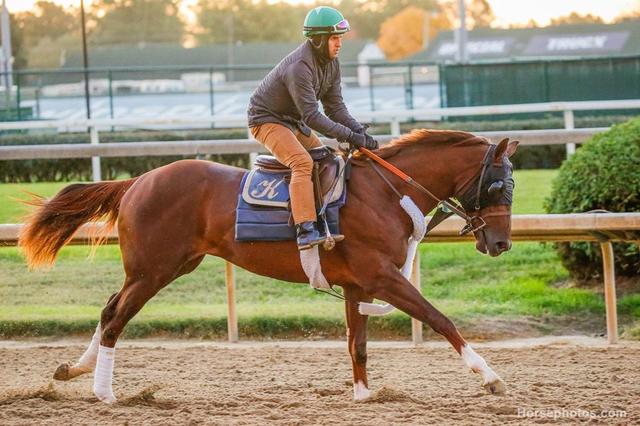