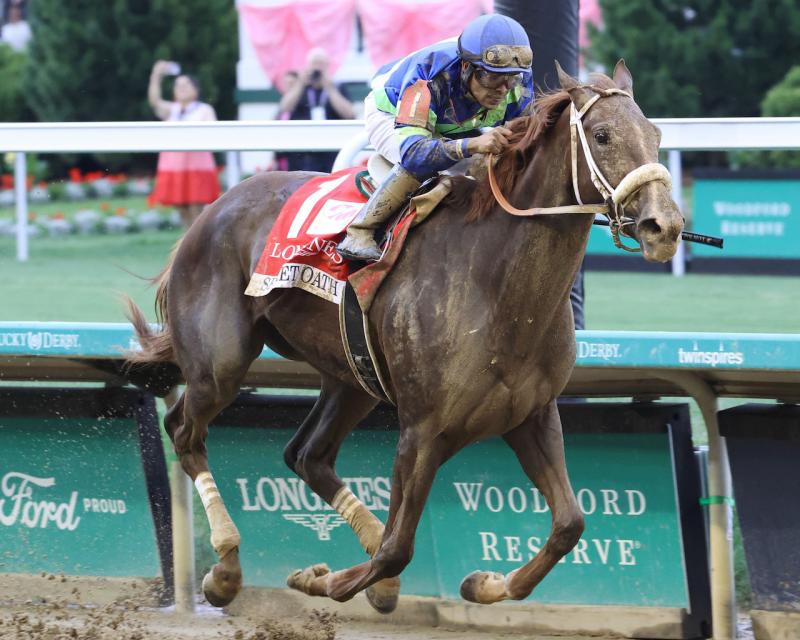 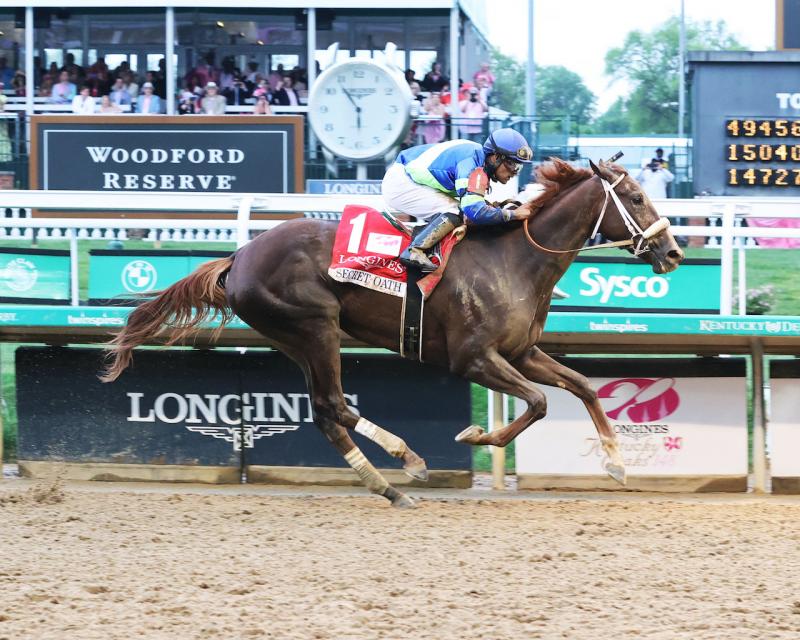 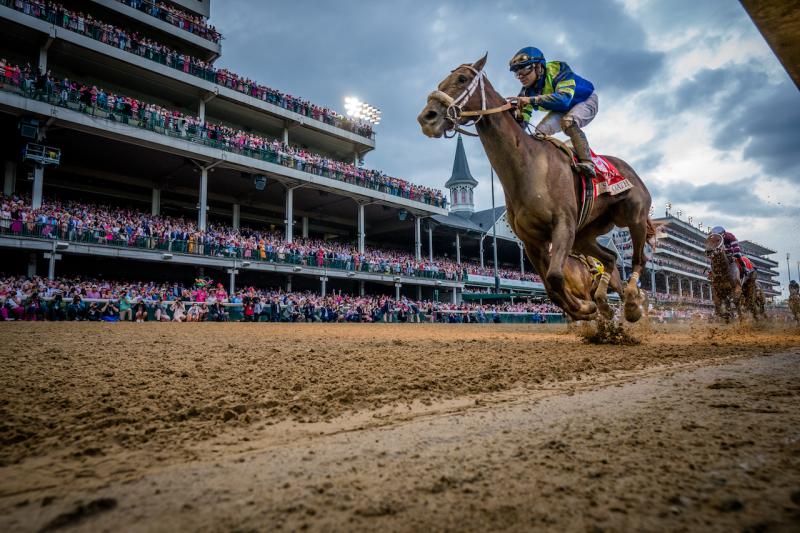 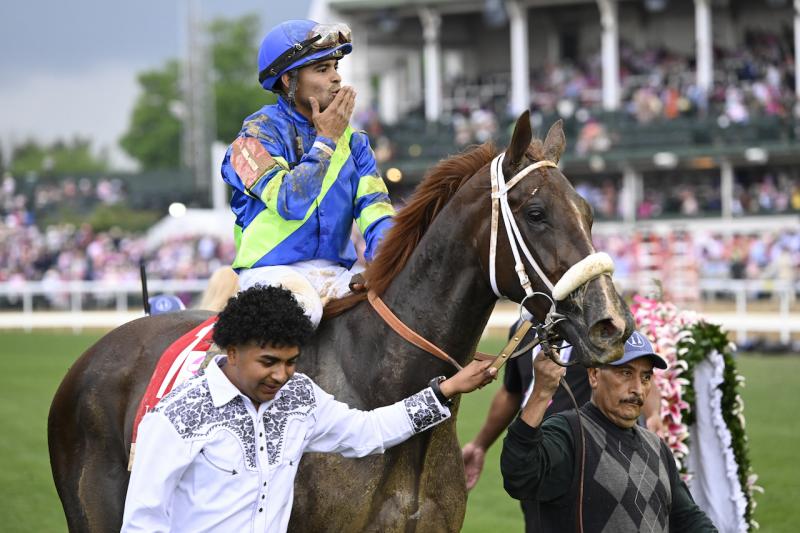 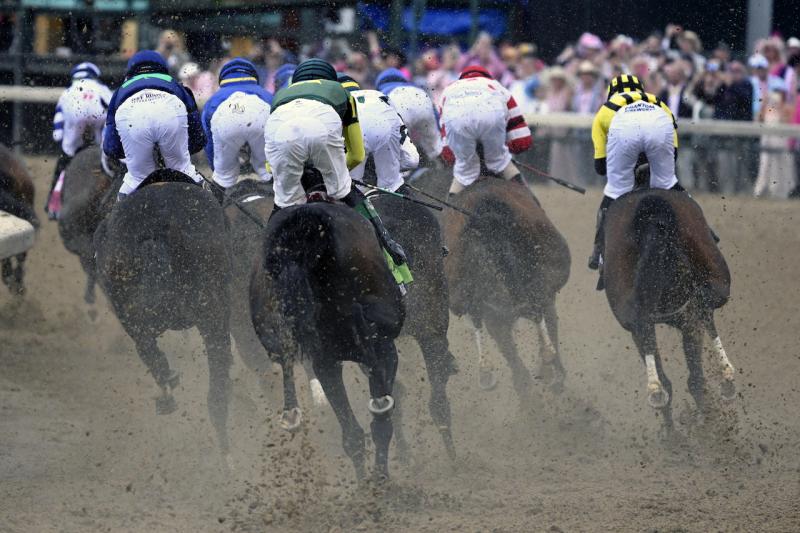 Briland Farm’s homebred Secret Oath made a five-wide sweeping move on the far turn and then collared Echo Zulu at the three-sixteenths pole en route to a 2-length victory over favored Nest in the 148th running of the $1,250,000 Longines Kentucky Oaks (GI) for 3-year-old fillies Friday afternoon at Churchill Downs before a crowd of 100,188.

Trained by D. Wayne Lukas and ridden by Luis Saez, Secret Oath completed the mile and an eighth on a track listed as good in 1:49.44.

The victory is the fifth in the race for Lukas and ties him with Woody Stephens for the most Oaks triumphs. Lukas’ other winners were Blush With Pride (1982), Lucky Lucky Lucky (1984), Open Mind (1989) and Seaside Attraction (1990).

It is the first Oaks victory for Saez.

Longshot Yuugiri and the undefeated Echo Zulu rocketed to the front from the gate and led the field of 14 through early fractions of :22.45 and :46.51.

Secret Oath assumed command at the three-sixteenths pole and opened a clear advantage that was more than enough to hold off Nest who rallied for second over Desert Dawn.

Secret Oath, bred in Kentucky by Stacy and Rob Mitchell, is a daughter of Arrogate out of the Quiet American mare Absinthe Minded. The winner’s share was $705,250 and boosted Secret Oath’s bankroll to $1,288,417 with a record of 8-5-0-2.

It was another half-length back to Echo Zulu who was followed in order by Kathleen O., Shahama, Turnerloose, Cocktail Moments, Candy Raid, Nostalgic, Goddess of Fire, Hidden Connection, Yuugiri and Venti Valentine. 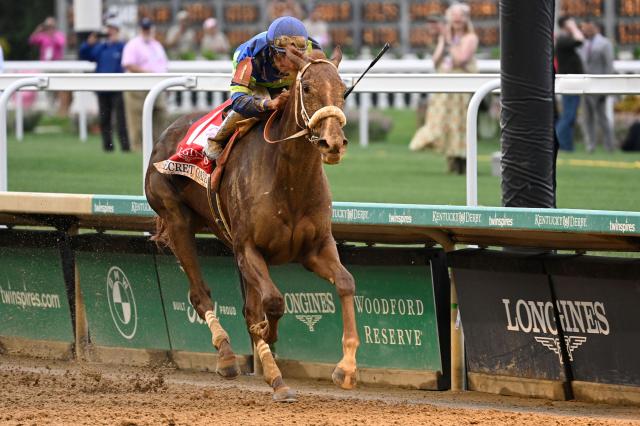