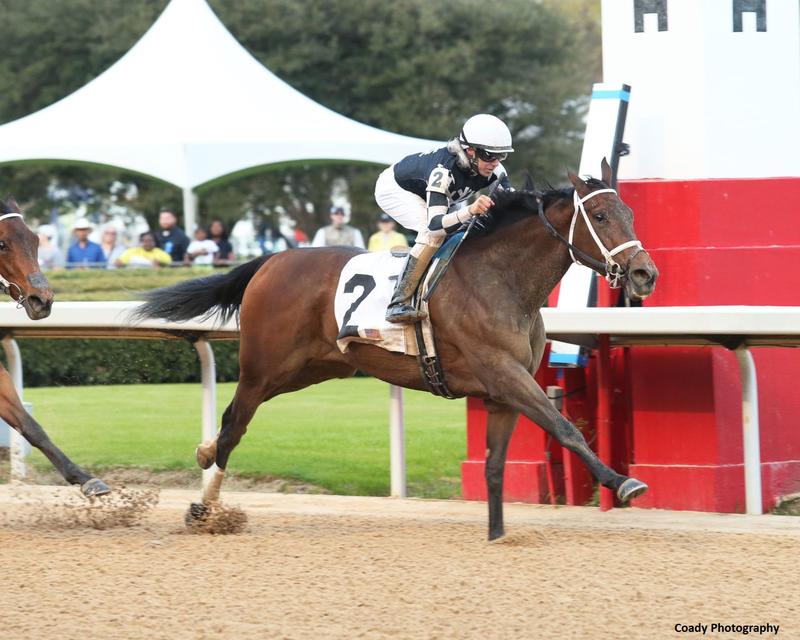 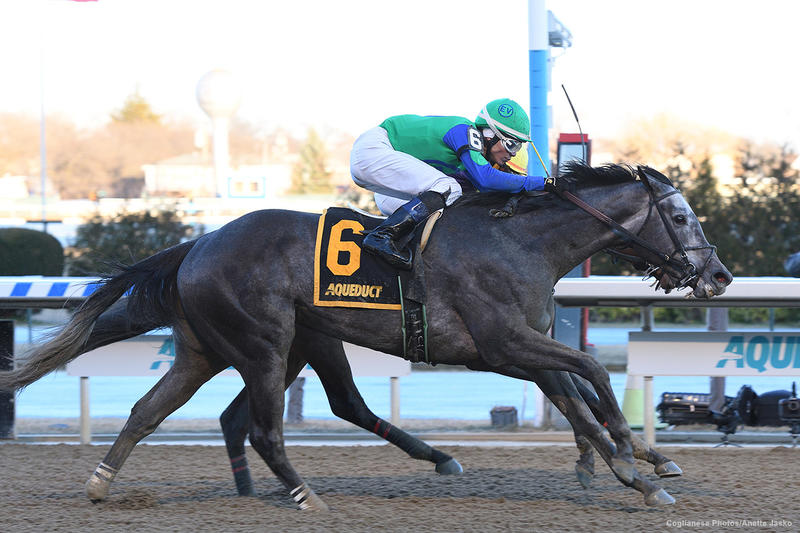 Early in the homestretch of the $300,000 Honeybee Stakes (G3) on Saturday at Oaklawn Park, it appeared Shesdaresthedevil was hopelessly bottled up behind runners, lacking racing room with little more a furlong left to run in the 1 1/16-mile journey.

But jockey Joe Talamo never gave up, threading the 3-year-old daughter of Daredevil through traffic like—well—a daredevil. And when an opening appeared between runners, Shedaresthedevil seized the opportunity and burst through with authority to claim the Road to the Kentucky Oaks prep race by three-quarters of a length.

It was an impressive performance from an improving filly. Previously the runner-up in a 1 1/16-mile allowance race at Oaklawn, Shedaresthedevil saved ground for most of the Honeybee, rating in midpack as the undefeated sprinter Ring Leader ran off through splits of :23.73, :47.89, and 1:12.83.

Race favorites Motu and Alta’s Award took first run at the pacesetter, racing to the front at the eighth pole, but Shedaresthedevil was just behind them and clearly full of run. When Motu drifted wide during the heat of the battle, Shedaresthedevil pounced in the blink of an eye, shooting through the gap to defeat Alta’s Award in the time of 1:44.38.

“I was loaded the whole way around there,” Talamo told Oaklawn Park. “It was just a matter trying to pick a seam and boy when it opened up, she absolutely exploded through there. I was very impressed with her gallop out and distance won’t be a problem. I think she’s going to get every bit of the mile and an eighth or even more.”

With her victory in the Honeybee, Shedaresthedevil picked up 50 qualification points on the Road to the Kentucky Oaks, placing her fifth on the leaderboard. Winning trainer Brad Cox indicated Shedaresthedevil—who races for Flurry Racing Stables, Qatar Racing, and Big Aut Farms—would likely complete her preparations for the Oaks in the April 10 Fantasy (G3) at Oaklawn.

“Hats off to Brad (Cox) and Jorge (his assistant) they’ve done a great job with this filly and I don’t think she’s even peaked yet,” said Talamo. “I don’t think we’ve seen the best of her yet.”

A similarly dramatic finish unfolded in the $260,625 Busher Invitational S. at Aqueduct, which likewise awarded 50 Kentucky Oaks qualification points to the winner. At the eighth pole of the mile test, it seemed certain Kansas Kis would spring an upset. The 13-1 shot had unleashed a huge mid-race move to sweep from last place and claim a 3 1/2-length advantage.

But making a premature move into hot fractions of :23.30, :46.81, and 1:12.95 proved destructive, and it was the more conservatively-ridden Water White—with Jorge Vargas in the saddle—who came flying in the final strides to nab Kansas Kis by a nose, springing a 17-1 surprise while stopping the timer in 1:40.21. There was a gap of 5 1/4 lengths back to third-place finisher Panthera Onca.

Conditioned by Rudy Rodriguez for E.V. Racing Stable, Water White had previously finished second in the Busanda S. and fifth in the Demoiselle (G2), both at Aqueduct. The form of the latter race was reversed dramatically as the pacesetting Lake Avenue and the late-running Maedean—who finished 1-2 in the Demoiselle—struggled home fourth and sixth in the Busher, split to the finish line by Mo City. Persisto trailed the field.

"We were happy with the way she was coming into the race," Rodriguez told the New York Racing Association. "It's a very tough group, but she was training very good. We decided to take a chance and she's been beaten by some nice, solid horses. We just took our time and let her continue to develop and today was our day."

With a total of 54 qualification points to her credit, Water White has advanced to third place on the Road to the Kentucky Oaks leaderboard.

"She was coming every step of the way. She wants to run all day," Rodriguez said. "We're going to try to point to the (April 4) Gazelle (G2) from here. We'll see how she comes out of this race and we'll take it from there."

The connections of Lake Avenue will hope for a better trip next time, as the 4-5 favorite was compromised by a slow start and a subsequent battle for the early lead.

"I wish we could run the race again. She missed the break a little bit," jockey Junior Alvarado said. "I wanted to take a hold and sit outside. Instead, I had to let her roll a little bit and I ended up in a duel. We just went a little too quick going a mile at this track. We paid the price at the end... She is a better filly than that. Coming off of a layoff, it was a little too much for me to ask her to go that fast in the beginning."

The Road to the Kentucky Oaks continues on Sunday with the Santa Ysabel (G3) at Santa Anita. 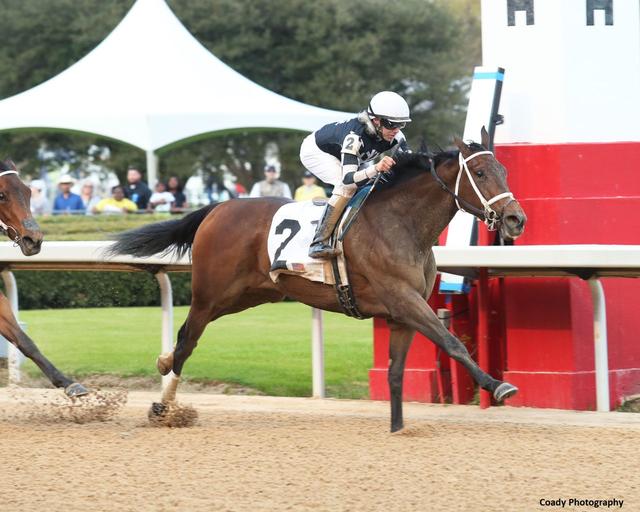