A trio of Road to the Kentucky Derby preps on Saturday will kick off with the $250,000 Withers (G3) at Aqueduct, a 1 1/8-mile event that features Shotski, who captured the Dec. 7 Remsen (G2) over the same track and distance. A son of Blame, Shotski led throughout in the Remsen, but saw a large lead in mid-stretch dwindle to a half-length at the finish.

"What I liked most about his Remsen win was that he put four lengths on the field at the top of the stretch," said trainer Jerry O'Dwyer. "He ended up only winning by a half-length, but it was his first time going two turns.

"He's very adaptable. He showed us that he can be up close to the pace. He's good from the gate. I would have to think that he would probably be in the first three early on."

Also possessing early foot is Monday Morning Qb, a last-out winner of the seven-furlong Heft S. at Laurel over New Commission. Vanzzy, who captured the Display S. over Woodbine's Tapeta track on Dec. 14, is another who could be close to the pace.

Trainer Linda Rice has two prominent contenders in Prince of Pharoahs, dead-heat runner-up behind Independence Hall in the Jerome S. on New Year's Day, and Max Player, a son of Honor Code who captured a one-mile maiden at Parx last out.

"He's put in a nice couple of breezes since breaking his maiden, so we think he deserves a shot in here to see where he ranks among his peers," said Rice regarding Max Player.

Portos broke his maiden stylishly by more than 10 lengths in the slop over the Withers track and distance on New Year's Eve. The Todd Pletcher-trained son of Tapit was making his fourth career start in that race.

"It was his fourth start and he's continued to mature each time he's gone into the gate," said assistant trainer Byron Hughes. "We really think he appreciates going two turns, so we were glad to see him break his maiden the way he did in his last start."

The Withers will award Derby qualifying points of 10-4-2-1 to the top four finishers. The scheduled post time is 4:25 p.m. (EST), and the race can be watched and wagered on at TwinSpires.com. 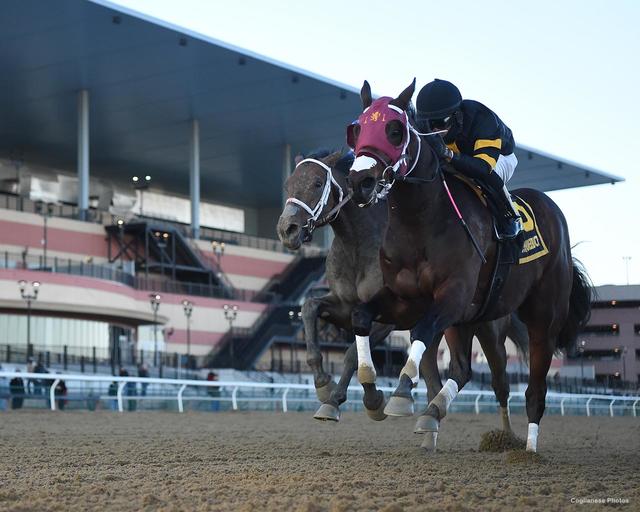