Owner J. Paul Reddam, trainer Doug O'Neill, and jockey Mario Gutierrez have teamed up to win the Kentucky Derby (G1) twice in the last decade, with I'll Have Another (2012) and Nyquist (2016). The trio could have another leading Derby prospect on their hands with the California-bred Slow Down Andy, a son of Nyquist who registered a minor upset Saturday in the $300,000 Los Alamitos Futurity (G2).

Making his open company debut, Slow Down Andy defeated 1-2 favorite Messier by one length in the 1 1/16-mile test, covering the distance in 1:42.33 over a fast track and paying $12.40. Messier and the distant third-place finisher, Barossa, are trained by Bob Baffert, who had won the seven previous runnings of the Futurity.

With Baffert trainees currently ineligible to earn points or compete in the 2022 Kentucky Derby, only Slow Down Andy and fourth-place finisher Durante, also trained by O'Neill, earned qualifying points. Slow Down Andy earned 10 points, while Durante also entered the leaderboard for the first time with one point.

Victorious by more than four lengths in his debut at Santa Anita in early October, Slow Down Andy met defeat in his most recent start, finishing second by a half-length in the Golden State Juvenile at Del Mar on Breeders' Cup weekend. Both races were restricted to California-breds.

Bred by Reddam, Slow Down Andy was produced by Edwina E, a daughter of Square Eddie. He's now bankrolled $249,850. 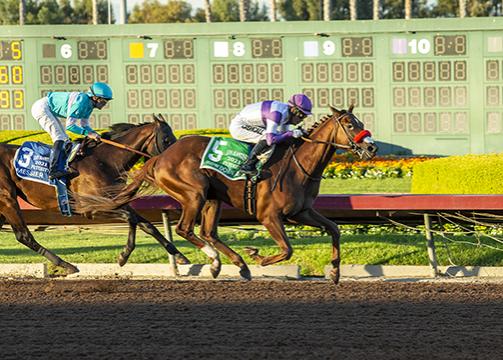