Last weekend's only Road to the Kentucky Derby (G1) prep, the Sam F. Davis (G3) at Tampa Bay Downs, temporarily vaulted the winning Sole Volante and third-place finisher Ajaaweed higher on the Top 20 of the leaderboard, and kept Independence Hall, who finished second as an odds-on favorite, in the Top 10.

Storm the Court, who's been on top of the leaderboard since his 20-point upset in the Breeders' Cup Juvenile (G1), returned to action on Sunday in the San Vicente (G2) at Santa Anita, but failed to muster a serious challenge in the 7-furlong dash when fourth to the heavily favored Nadal.

This will be Storm the Court's final week atop the Derby leaderboard for awhile as four preps in the coming week will shake up the standings considerably.

On Saturday, the Risen Star (G2) at Fair Grounds will be run in two divisions, with each offering qualifying points of 50-20-10-5 to the top four finishers. Unlike the 2019 Rebel (G2) at Oaklawn Park, which was also run in divisions, the Risen Star's Derby point allocation is not affected or reduced by the dividing of the race as its advertised purse of $400,000 remains unchanged and will be offered in both splits.

The first division of the Risen Star is seemingly the stronger of the two, with the Lecomte (G3) top three of Enforceable, Silver State, and Mr. Monomoy in the field. The second division features the season debut of Anneau d'Or, runner-up last fall in the Breeders' Cup Juvenile and Los Alamitos Futurity (G2).

The final prep of the week is on Presidents Day, Feb. 17, when Oaklawn hosts the Southwest (G3) over 1 1/16 miles. It's the final Road to the Kentucky Derby series prep offering points of 10-4-2-1.

The Fountain of Youth (G2) at Gulfstream Park will be the final Derby prep of the entire month when it's renewed 12 days after the Southwest on Feb. 29. 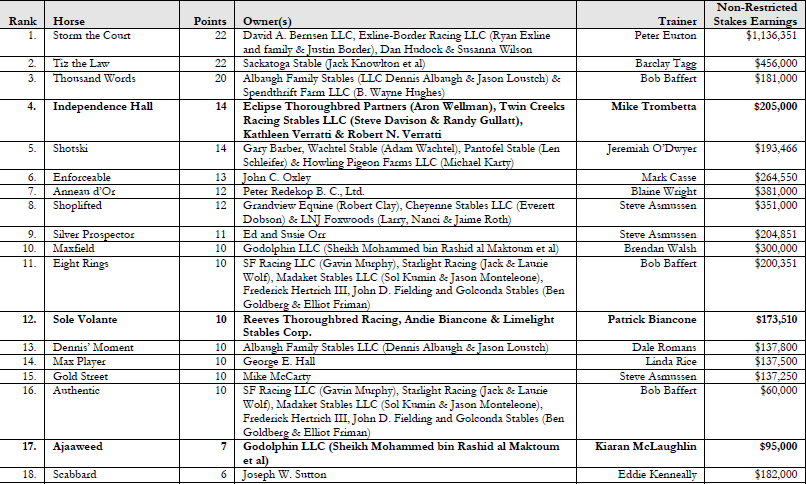